New grower looking for assistance. I have been reading forums and grow journals for months, doing tons of research on how how to best grow mj indoors. I have done one previous grow that was an unknown bag seed grown in miracle grow in a closet under cfls (I didn't even know to check the spectrum on them at the time!). I had almost zero knowledge and it actually turned out half decent relatively speaking. But that was a number of years ago and I am sure just beginner's luck.

I have since decided to give it another go but this time doing it right. I have (2) 4X4 tents. One for veg. One for flower time. They each have 6 in. exhaust fans/carbon filter combos plus (2) small circulation fans.

Pics at bottom are 2 weeks from day zero germination day in most paper towels. Both seeds popped fast (next day w/nice long taproots). Originally planted in the standard red solo w/holes. I replanted in about one week to the current pots due to what I think was initial over watering.

Soil is a FFOF/perlite/vermiculite 2/1/1 mix. (I have since read that this may be too "hot" youngsters?)

Watering with tap that has sat out at least 24 hours. I did add half strength rhizotonic to 2nd watering. Then added a little blackstrap molasses (1 tsp to gallon) for the watering after that. This is when I began seeing problems. I also may not have waited for the soil to dry enough in the beginning and may have over watered/rotted my roots? I am NOW waiting until soil is nice and dry before watering again.

I check my ph before watering using drops. Whether watering with just plain water or when I added the rhizo/BS molasses, I always ph test right before watering. My tap seems slightly on the high side (close to 7) I usually lower it a bit with just a drop or two of ph down per gallon to get it a little under 6.5. I have also recently tested my run off and that came in right around 6.5 so I really don't think I have a ph issue?

Temps have been a little low due to using leds. Around 70/71F lights on. 64/65 lights off. I have since added two 100w equivalent cfls just to try to warm it up a tad during lights on. For the past two days it has been around 73F. Humidity was also real low (around 40% rh) I just bought a real small cool air humidifier and it has gotten the rh to around 47-50%.

I decided to try and go LED and am currently vegging under a Reflector LED Grow Light 48x3w from topled. It has two buttons "grow" and "bloom booster". I am using just the "grow" currently about 10 inches from the tops.
Reflector LED grow light

So as you can see, I have developed quite a bit of yellowing on the lower leaves. More so on the Thai Fantasy. Without experience it is hard for me to determine what the issue is?? From doing lots of reading and research, it seems that it can be anything from nitrogen deficiency (I doubt it if FFOF is rumored to be hot?). Nitrogen toxicity? Doesn't really look like a lot of the sample pics I've seen. Magnesium? I bought some epsom salts but have not used them yet as I am not sure that is the issue? A ph problem/temperature/humidity issue? Nute lockout? Root rot? HELP!!!!!!!!!

I am really at a loss and need help coming up with an accurate diagnosis before I compound my issues by being too eager trying to rectify them. Any hints/help/suggestions would be extremely appreciated. Thanks in advance! 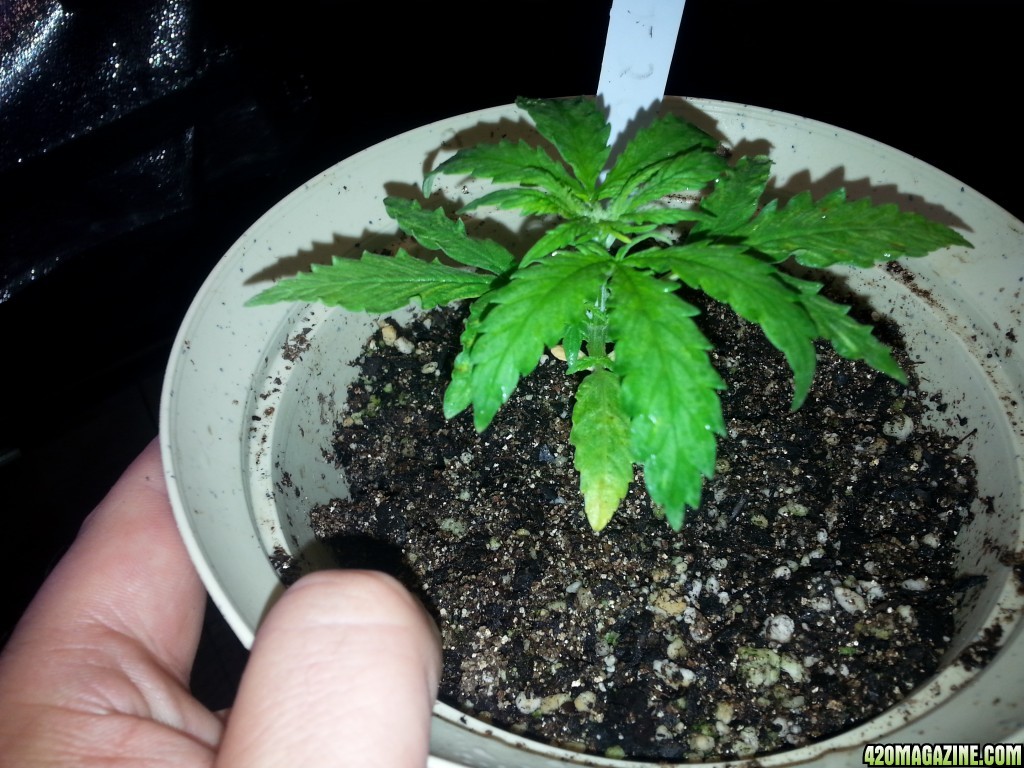 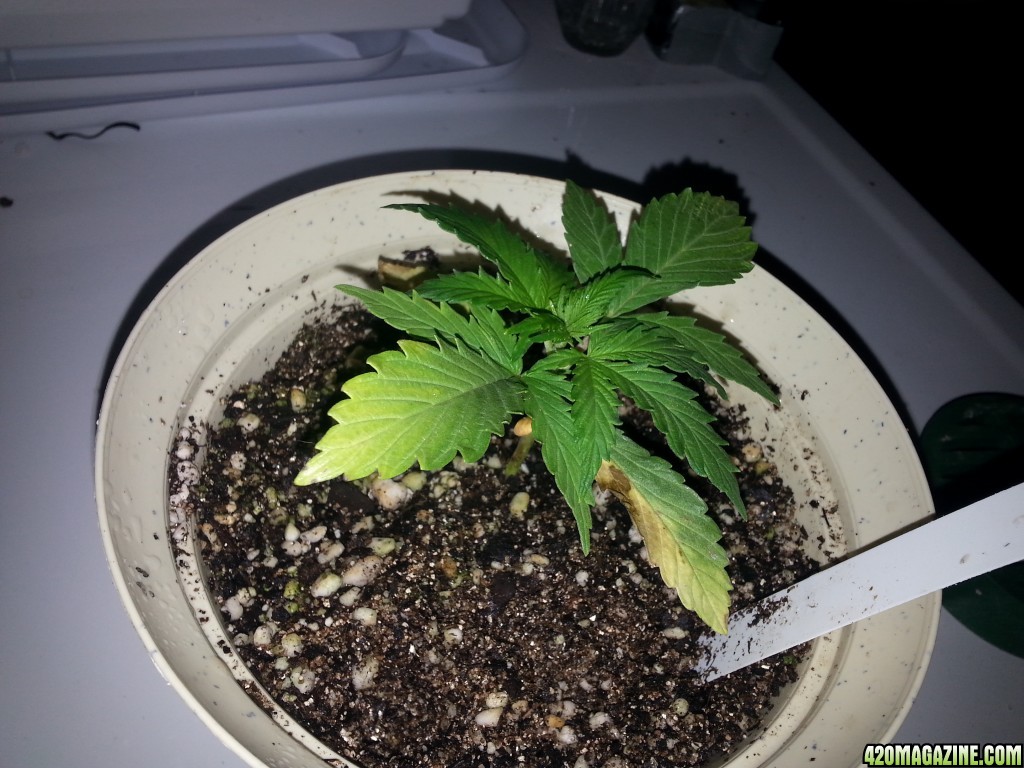 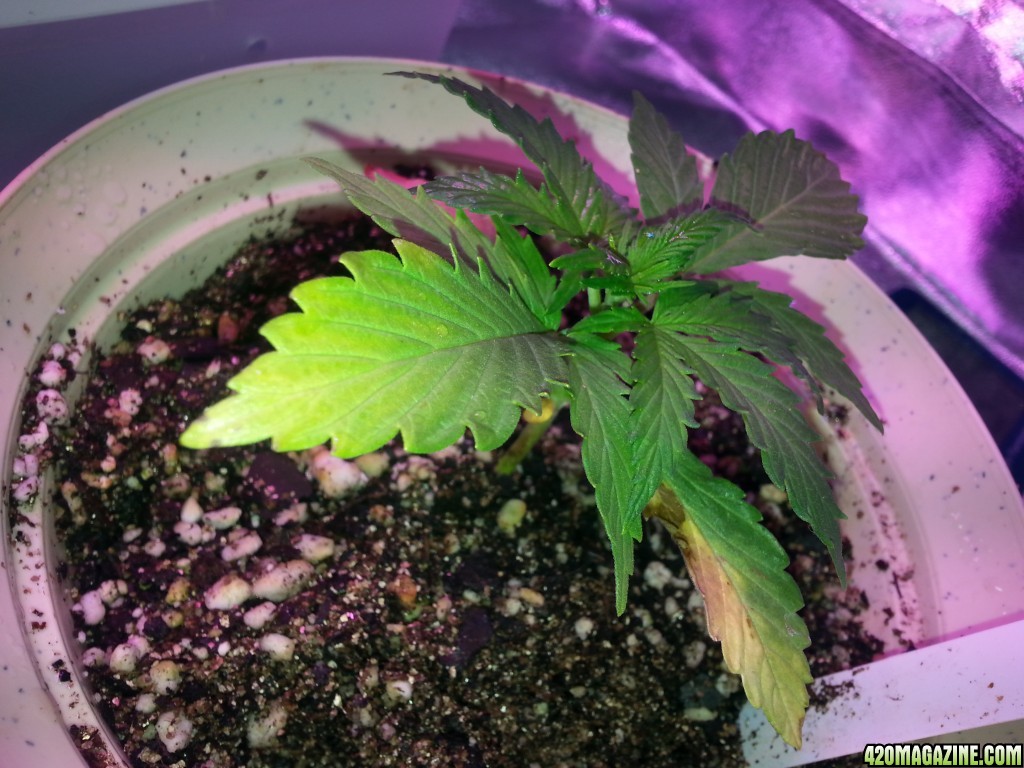 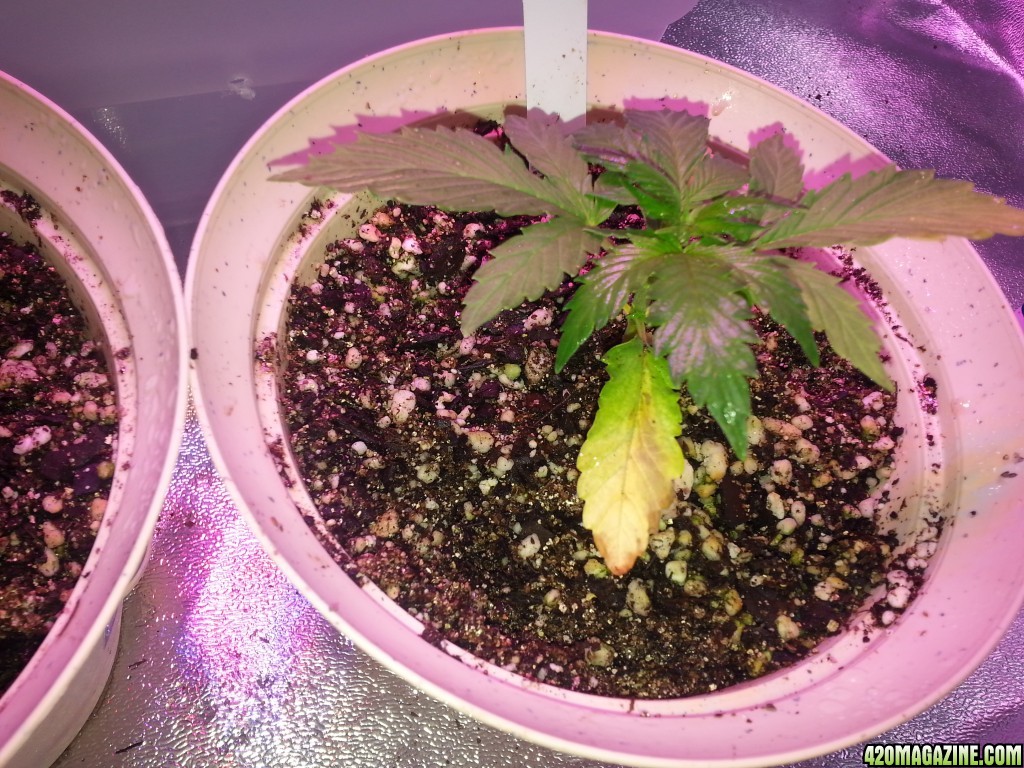 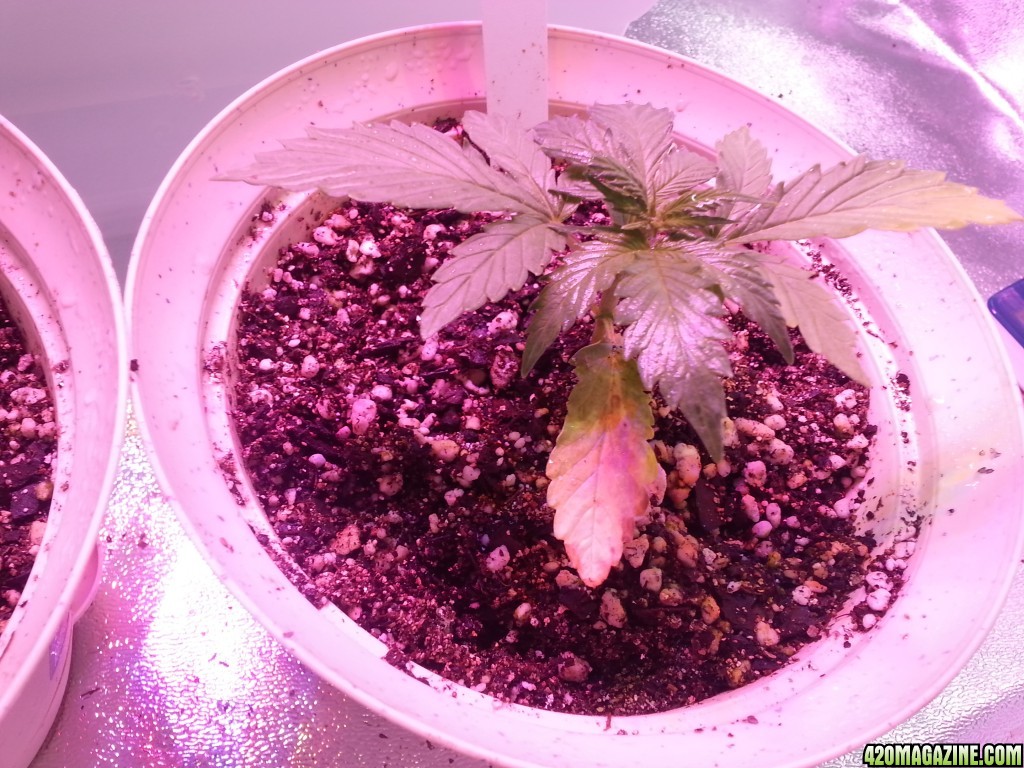 Sorry... Forgot to mention. I have not fed them yet due to fearing the soil may have plenty of nutes this early on. But I do have AN iguana juice "grow" on hand if they seem hungry.

Budrick said:
I would let them dry out a bit for a few days then flush with ph'ed water no nutes and maybe back that light up a bit
Click to expand...


Thanks for the suggestion. Backed the light off about 6 inches. I am going to force myself to wait a little longer between watering and let them dry out some. Then I will flush with purified ph'ed water.

But do you think I should hold off on the rhizotonic as well?

veeters2002 said:
Thanks for the suggestion. Backed the light off about 6 inches. I am going to force myself to wait a little longer between watering and let them dry out some. Then I will flush with purified ph'ed water.

But do you think I should hold off on the rhizotonic as well?
Click to expand...


I would. Just let them dry out. Light back off is a good idea - easy to try. They don't need much when they are this little.
Current Grow Journal : I'm BACK! Shuffle's LED based two strain soil grow journal - come along with me!
V

Thanks @shuffledemon. I am learning that simple is better this early on. But it is fun to be "attentive" and feel like I am doing something and caring for them. I may have to tie my hands behind my back!

But isn't the rhizotonic meant to help stimulate early root development for seedlings and clones?

No experience with the rhizo really veet.

How are things rolling along?
Current Grow Journal : I'm BACK! Shuffle's LED based two strain soil grow journal - come along with me!

13 plants all not doing good