State Banks Pot Money That Industry Is Unable To Do Itself

Colorado's medical marijuana industry, considered to be worth a fraction of what the recreational-use business will be, ponied up more than $9 million in sales taxes in fiscal 2012-13, state records show. It was nearly $6 million the fiscal year before. And all of it was deposited into JPMorgan Chase Bank, one of three banks with contracts to hold state funds. There is nothing in those contracts that deals with marijuana-derived money, which is, technically, subject to federal seizure should any of it be linked to illegal activity. And by federal law, marijuana is still an illegal drug. As recreational marijuana businesses struggle to find banking services for a multimillion-dollar industry just as banks struggle with federal laws that essentially prohibit them from offering those services the state is able to do what the industry cannot.

Even as Colorado openly banks the very money banks say they're prohibited from accepting – although some acknowledge doing so "quietly" several state agencies can't exactly explain how it's happening. There are no rules, no memos, no opinions, no laws or anything else that officials can point to that clearly says the state can bank pot-derived income. Yet it has been doing so since voters legalized medical marijuana in 2000. There's plenty of information, however, stopping banks from accepting marijuana businesses' business, and the industry has railed at how huge a problem it can be for a cash-only business.

"The state treasurer has to put it somewhere," reasoned Fred Joseph, who retired as Colorado's commissioner of banking Wednesday, the day legal recreational pot sales began. "As to where the authority comes from to make it legal, I have no answer to that, honestly." JPMorgan Chase simply reasons that the state collects tax revenue legally from licensed businesses and that's all the banking giant will say. "Our state and municipal clients legally collect taxes and fees from millions of businesses and residents," spokeswoman Mary Jane Rogers said in an e-mail exchange. Wells Fargo, which also has a contract to bank state tax revenues, though not the marijuana-derived taxes, simply says it won't comment about its banking clients.

"Kidding Themselves"
Industry advocates scoff at any attempts to justify the different treatment. "State agencies and the federal government both accept money from marijuana businesses in the form of tax payments, bonds and licensing fees," said Betty Aldworth, deputy director of the National Cannabis Industry Association. "In fact, marijuana businesses pay two to four times the rate of other businesses in federal taxes. Bankers holding accounts for a state with legal marijuana businesses but closing the accounts of those legal, regulated businesses are kidding themselves if they think they aren't handling marijuana-related money."

Officials at various state agencies – revenue, banking, attorney general's office – simply shrug when asked how it is Colorado can find a bank to put pot-derived revenues that come from businesses that legally cannot have a bank account of their own. The Colorado Department of Revenue, which collects the taxes and licenses the marijuana businesses, waves around a number of letters and memos from the U.S. Department of Justice as its justification – letters that simply say how the federal government is more interested in certain kinds of high-level illegal activity, without giving a firm nod to banks that doing business is acceptable.

"The state does not differentiate the tax revenue from which industry it is collected when depositing with the bank, and the state will continue to operate in this manner," revenue spokeswoman Daria Serna said. Essentially, tax money is legal even if its source isn't. "The bottom line is that banks have been told not to bank marijuana businesses while nothing has been said about banking governments, which we have done for decades," said Don Childears, president and CEO of the Colorado Bankers Association and a member of the state's marijuana-implementation task force.

"It's not been an issue because, quite simply, it's not been raised by the government," Childears said. "It has been raised very pointedly for the businesses." DOJ officials have no explanation why it's OK for government to bank pot-derived income. "As stated previously, the DOJ and the Department of the Treasury are looking at the regulatory issues that legalizations have presented, and they've been looking at that for a number of months," spokesman Jeff Dorschner said.

In Washington state, Bank of America says it will bank state revenues derived from recreational and medical marijuana sales. State Treasurer Jim McIntire told The Olympian newspaper he wasn't "too worried about it" and that BofA was probably too big for the federal government to raid. Colorado Treasurer Walker Stapleton's office wouldn't comment for this story, but a spokesman acknowledged that the office could not locate any specific permission for it to bank the marijuana-derived tax revenues. Joseph said the issue of pot-derived revenues being banked by secondary businesses – landlords and utility companies among them – is "only going to get bigger as recreation sales get bigger." Said the NCIA's Aldworth: "Frankly, it's easier for an underground drug dealer to have a bank account than a legitimate marijuana business." 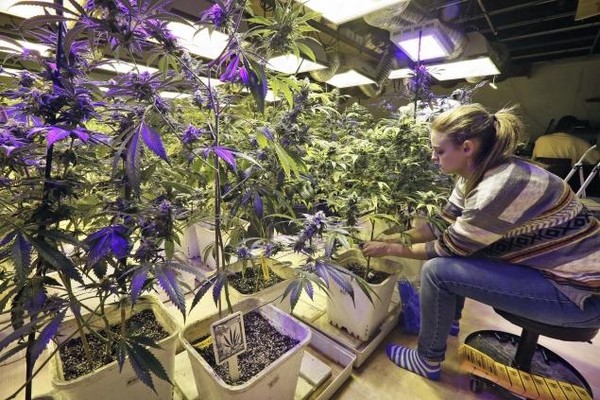 Thanks for the post General
420 Magazine News Team
Creating Cannabis Awareness Since 1993
http://www.420Magazine.com
A

Good post! This is a great way for growers and dispensaries to launder their income from weed sales; all they need to do is to overpay their tax bills by the amount desired, then apply for a refund in the form of a government check labeled 'x overpayment reimbursement, which will then be 'clean' as a whistle!

This could be a breakthrough, right?

Straight people don't know, what you're about
They put you down and shut you out
you gave to me a new belief
and soon the world will love you sweet leaf

I believe that the Federal Government needs to make laws legalizing Marijuana since it was illegally attacked to begin with in the 1930's. Besides it has way more uses than just recreational and medicinal uses.

It could literally save our economy if given the chance. They where using hemp to make plastics and the seeds of this species is the perfect source of proteins and as a bio source for fuel and so forth it is unbeatable.

It is a weed so it grows in almost any condition. It also helps to revitalize the soil so even farmers could use it to make their crops healthier which means less pesticides and less poison in our diets.

The fibers are UV and rot resistant and longer than any other fiber source known to mankind so it is perfect for paper and plywood like applications and to use with a non-toxic epoxy found in South Africa Trees that would be perfect for replacing fiberglass and etc.

It is less expensive to process and use than synthetic materials and if you ask me far superior which is why it was secretly attacked in the first place by Dupont and Hearst.

It also is the best source for a paper compared to trees because of it's fiber lengths and etc. It makes great canvas and is uncompared there also due to it's UV and rot resistance. You can take a sludge hammer to it's plastics it makes and it would not even crack it as was demonstrated in 1940's. It would be excellent to replace metals even and it grows so fast and plentiful that it could replace all kinds of resources this country is already running out of such as steal and so forth. It is much easier to grow this and use it than to mine and smelt metals.

Like I said it is a weed and if you threw the seeds all over the place it will thrive and grow very fast like weeds and there is no substitute for it in many areas.

They are even using it along with Bamboo to make off road bikes so it has structural uses also. Homes could be put together with that and bamboo and they would withstand earth quakes much better.

If the home is a geodesic dome structure it would be even better. For that matter you could use it for pipes also which would be much less toxic than metal and modern plastic pipes. That it is even categorized as a weed is ridiculous. It is a God send for mankind and never should have been outlawed to begin with.

It needs to be brought back into our economy and researched much more so as to use it to it's fullest in every industry it can be used. It can even withstand droughts which is what this planet is headed for with Global Warming at the same time there is less evaporation due to the particulate matter in our atmosphere.

This is it's time to thrive and as I already mentioned the seeds are a great food source. Since it gets up to 15' high to me it like a small tree and should not be called a weed at all. Since it takes around 10 weeks to grow and one acre of marijuana or hemp is equivalent to one acre of trees in bio mass it is far superior to trees in many ways since you could grow way more and way faster than trees are capable to produce in the same amount of time.

That also makes it perfect to replace foreign oil supplies and so forth for fuels and lubrication and etc.

It is more a resource also because you do not have to search and drill for it. You just plant the seeds and it is there in 10 weeks time and ready to convert to whatever industry or industries it needs to be used for.

The farming industry will easily survive with this resource given back to them in many ways also. Even our first president grew hemp and it was their cash crop back then. I would not doubt that they also used it recreationally since they grew it commercially.

Government needs to leave this plant alone and let it be and collect taxes off it's sales and that is that. It will fix our economy given half the chance it needs. Also everyone prosecuted for its possession needs to be released which frees up tax dollars used to incarcerate them in the first place.

This plant has roots in every way of life and resources and industries and so it needs to be left alone to thrive so we all get more from it. It really is a God send and the Governments are suppressing one of our creators most precious gifts to mankind. This needs to be legalized and not regulated so that the industrial hemp industry can also thrive.

Besides the industrial hemp has more of the cannabinoids needed for medical uses than recreational high THC plants. But I know personally that medically speaking the high THC also helps to sleep which is healing in and of itself. When you sleep is when our immune system is at it's peak. So we need the THC also. Or at least I do.