It's been two years since Rhode Island launched its medical marijuana market and opened dispensaries around the state, but tax revenues haven't been quite as high as state officials expected.

There are now three medical marijuana dispensaries – also known as compassion centers – selling pot to patients in Rhode Island, with the state collecting a 4 percent surcharge and a 7 percent sales tax on all their sales. While revenues are increasing, some compassion centers say they're facing increasing competition from caregivers who can grow and sell medical marijuana without paying taxes to the state.

"There are people out there who've made this a fulltime business," said Chris Reilly, a spokesman for the Thomas C. Slater Compassion Center in Providence. "It's a competitive force that's real."

State officials report that medical marijuana revenues are about half of what was predicted as the state prepared to legalize compassion centers. The dispensaries don't have to disclose sales figures but the state discloses aggregate figures for the revenues it collects.

In 2012, the Rhode Island Department of Revenue estimated that sales tax from medical marijuana would total approximately $2 million and that the surcharge would total approximately $1.1 million by 2016. Now, the department is projecting that sales tax will be about $1 million and the surcharge about $675,000 in fiscal year 2016.

"One million dollars is nothing to sneeze at, but if you think about meals and beverages, on the sales tax side, that's about 20 percent of our sales tax, that's $150 million to $160 million a year or more," said Paul Dion, the chief of the Office of Revenue Analysis at the state Revenue Department.

Though 6,259 patients are registered with Slater, fewer than half have actually purchased marijuana from the facility, Reilly said.

While the revenues have been lower than projected, they are increasing. The Rhode Island Division of Taxation reports the amount of surcharge revenue the state collects increased from $269,156 in 2014 to $385,724 in 2015, a 43 percent increase. The number of medical marijuana patients has also increased, from 4,241 in 2011 to 11,620 this year, according to the latest data from the state Health Department.

Dion said the overinflated revenue projections could be attributed to delays in getting the dispensaries up and running – the third compassion center didn't open until 2014 – and changes to the state's medical marijuana statute. When projections were first made, for example, there was no cap on the number of plants a center could grow; such a cap was imposed but has since been eliminated.

Dion acknowledged that a competing source of medical marijuana could impact compassion centers, though he pointed out that caregivers are not supposed to make a profit under the law.

Rhode Island legalized medical marijuana in 2006. Compassion centers were legalized to offer patients another option for purchasing it. 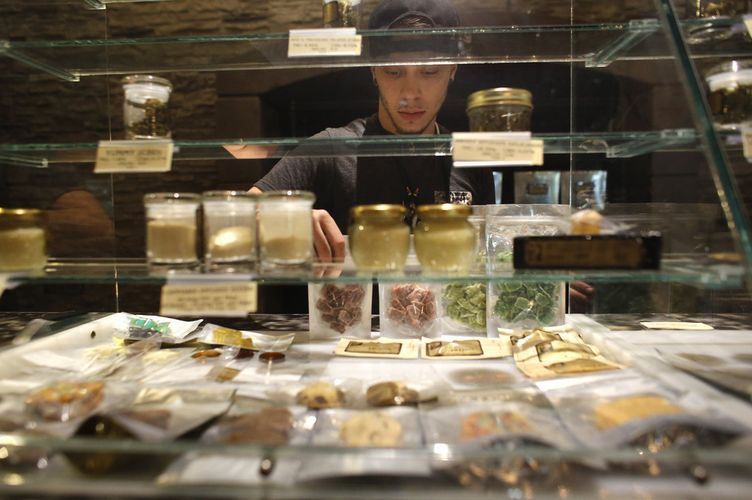