Constellation Brands is buying 10 percent of a Canadian weed firm, as capitalism's embrace of the green boom tightens.

Attorney General Jeff Sessions continues to hint that his team is working up reasons to crack down on states that have legalized cannabis, despite a surprising quiescence on the issue over his first eight months in office.

A new high-profile corporate deal may help to explain why Sessions has thus far disappointed allies in the anti-pot cause. The biggest obstacle to his would-be retrenchment may lie not in the law nor with legalization's fecund popularity among voters, however, but in the business community's tightening embrace of the multi-billion-dollar market for legal cannabis products.

Constellation Brands, the firm behind major Mexican light beer brands Corona and Modelo, announced Monday it had purchased a 10 percent stake in the Canadian firm Canopy Growth Corporation. The $190 million acquisition is in part about the beverage company's desire to market cannabis drinks in Canada once recreational adult-use cannabis legalization goes online in the next couple of years.

Constellation is an American company. Its investment in a firm experienced with manufacturing cannabis extracts for the medicinal market in Canada signals a long-term play for appetites south of the border, too. "We think that [U.S. legalization is] highly likely, given what's happened at the state level," Constellation CEO Rob Sands told the Wall Street Journal. "We're obviously trying to get first-mover advantage."

The entry of major international food and beverage companies into the pot space is a significant sign of the market's development, but it's certainly not the first indicator of just how large an economic bear Sessions would be poking by going after pot legalization experiments.

Investors have poured hundreds of millions of dollars into the nascent cannabis industry inside the United States over the past few years. The money isn't just going to one-off growhouses and dispensaries, either. Sophisticated business plans reflective of advanced capitalist treatment of a new product space are abundant – in particular with a company called Americann, which is building the largest cannabusiness campus in the country just outside Boston, and also plans to sell its branding and distribution systems to actual cannabis producers as legalization advances.

Wealthy people with millions at stake tend to have better luck in the halls of power than the unwashed masses. Deals like Constellation's bring a flashy corporate name into the weed news. But a much wider class of America's wealthy already have something to lose should anti-pot ideologues in President Donald Trump's administration succeed in getting a crackdown approved. Sessions has already sought authority to prosecute medical pot companies and patients, pressed the elected leaders of four legalization states under spurious rationale, and instructed prosecutors to once again seek the stiffest possible penalties in all cases – even where that means asking a judge to put a nonviolent small-time crook away for life because of an old pot bust.

The ownership class having skin in the game may help shelter legalization and the accompanying social benefits from Sessions' longstanding hardliner thinking. But it's also helping ensure that the people most harmed by generations of pot prohibition – largely black and Latino Americans, disproportionately targeted by the justice system for decades even though white people use cannabis at the same rates – are fenced out of the financial dividends of the national sea-change on pot law.

As legal pot moves from small-business grows and retailers to vertically integrated investor-driven conglomerates, it becomes harder for anyone not already rich to tap into the huge profit engine of legalization. Those barriers are even steeper for black and Latino families who are already a dozen times poorer than white families when comparing median wealth figures.

Legalization states have generally barred anyone with a criminal record from even being employed in the pot biz, let alone from being licensed to own a firm and make real money. After outcry over this provision's obvious tendency to recapitulate racial disparities in criminal justice outcomes, some lawmakers have made good-faith efforts to avoid rules that effectively make pot profits legal for whites only. But the alternative mechanisms lawmakers have ginned up so far are clumsy, probably fail to clear legal tests for equal protection under the law, and are fundamentally unable to wipe out the deep-seeded legacy of racist policy around cannabis. 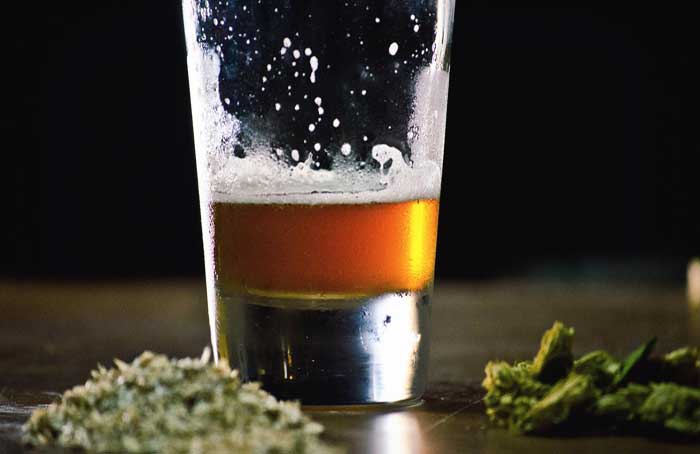 Is The Best Marijuana Investment a Beer Stock