With legalization for medical use and also in some states recreational use, the cannabis industry has grown precipitously in the United States in recent years. To keep up, a new area of legal practice is growing up to provide services to companies with needs ranging from navigating regulatory hurdles to assisting with finance issues.

But in terms of research and development of cannabis, the United States–where source material for legal research is restricted to one farm at the University of Mississippi–is getting smoked by Israel, a pioneer in medical pot where American cannabis companies are turning for their R&D needs.

Raphael Mechoulam, an Israeli chemist, identified tetrahydrocannabinol, marijuana's psychoactive ingredient back in the 1960s; and in the 1990s made breakthroughs in identifying the endocannabinoid system, which is triggered by THC.

To be sure, recreational use of marijuana is still illegal in Israel. But Israelis lead the world in chiefing up: About 27 percent of Israelis aged 18 to 65 used marijuana in the prior year, according to the Israel Anti-Drug Authority, compared with about 16 percent of Americans.

But medical marijuana enjoys the full-throated support of the Israeli government, which is even looking into ways to export its domestic products abroad.

American cannabis companies have taken notice and have begun to outsource R&D to Israel, where some 50 U.S. cannabis firms are conducting research there via partnership or hiring researchers like Mechoulam, who is now 86 and who has worked for three U.S. companies.

Among those who are working to facilitate cooperation on cannabis among companies from both countries is New York-based Yariv Ben-Ari of Akerman, which in 2014 became a pioneer in its own right by forming a cannabis practice of which Ben-Ari is a member.

Ben-Ari, who works with Israeli firms looking to do business in the United States, spoke with the Law Journal by phone to discuss continuing challenges that cannabis companies face and to compare the Israeli government's support for the industry (its health ministry recently released a "Green Book" to assist doctors with medical applications) with that of the U.S. government's (Attorney General Jeff Sessions reminded a conservative radio talk show host on Thursday that marijuana is still illegal under federal law).

The interview has been edited for length and clarity.

Q: While Americans' attitudes toward cannabis has changed drastically in recent years, Israelis' acceptance of it appears generally more advanced. Why?

A: Israel is known for its innovative nature. They're very well-known for that, for being creative and willing to explore new industries, new technologies and learn more about them. They've also been known in the medical research area as well. [Mechoulam] I would say was the Einstein of cannabis, if you will. He's the one who isolated the THC in cannabis, which really led to the boom we see these days in the entire cannabis industry.

Q: How are U.S. cannabis companies and Israeli firms working together?

A: Israel is primarily involved in two sectors of the cannabis industry: agricultural and medical. Those are the legal industries in Israel. In terms of research, there are many companies –U.S and others–that have invested or partnered up with Israeli companies because of the ability to conduct studies in Israel that you can't do in the U.S.

For example, in Israel they have clinical studies going on, actively, in the world of cannabis medical research, where they're testing cannabis product for medical purposes. Last time I checked there was something around 23,000 patients with different ailments in Israel receiving treatment by way of a cannabis-related product. There are 40 to 50 doctors who are licensed to actually prescribe cannabis. So companies that might may have a lot of R&D going and can't execute on it are doing it through Israel because it is permitted there and actively going on.

In the space of agriculture, there's a question of how to grow it, how to deal with genome, how to splice them, how to really understand the cannabis products that, when they come out, there are ways to maintain the quality of it, the genetics of it, and when it goes from place-to-place you have a consistent product.

On top [of] that, the government has provided grants to actually do studies. Israel is very forward thinking in this area. They have a cannabis commissioner in its department of health who's extremely active in looking at this in a forward-thinking manner. They're probably a decade ahead of us in terms of permitting uses and study of this in a regulated environment.

The fact that you can grow cannabis in Israel and deal with it from different genetic perspectives allows the foreign companies a place to go to actually execute on their studies and see if their research actually works.

Q: How does each side benefit from the relationship?

A: When we say there are 40 to 50 doctors who are licensed to [prescribe cannabis products] or 23,000 patients receiving treatment, it sounds like relatively small numbers when we come from a place like the U.S., but remember that Israel has a population of 8 million. Israel gets a large benefit in terms of capital and knowledge from companies and information and studies that supplements what they're doing there.

Other countries like the U.S. that have challenges in this space because of the regulatory regime we live in, where it's not permitted at the federal level, need a place to go and study and do all those things that are permitted there.

One of the challenges many countries face that don't have legalization is they can't export or import any part of the cannabis in order to study it. Israel is actively looking at different ways of exporting it for medical purposes to other countries so that they could benefit from what has taken place in Israel.

Q: Where do you come in? What do attorneys do to help countries work together?

A: They need someone who can harmonize what's happening between Israel and the U.S. in order to put together a company that is structured that's able to execute a business plan in the U.S. And that's where we come in. We assist in anything from helping them structure their entry into the U.S. to assisting them with permits in various states where it is lawful to grow cannabis and do different things with cannabis. We help them with their real estate needs. They also face challenges with financing. Not every bank while finance a lease or a purchase of land when it comes to the cannabis industry and not every bank will bank a cannabis company because of the regulatory issues. So we help them understand those things and help them find service providers in the U.S. that can help them get the services they need to operate a company here.

There are many, many issues that arise because of the disparity between the illegality of it at the federal level but the permissibility of it at state levels.

Q: How do Israeli firms conduct business in the United States?

A: It depends upon exactly what the company is looking to do. Is it medical marijuana? Is it in a consumable space? What part of the supply chain?

We really have to analyze this at first by which state they are looking to work in. Where are they going? What's permitted there? What license are they looking to obtain? Based on that we figure how best to structure for that activity so that they are complying with the law of that state and understand what activities they are limited to within state borders.

Certain states have had residency requirements that we have had to deal with, that they comply with the local laws to be able to obtain state licenses.

States like California, you have to get kind of a double license. In order to get a state license, you first have to get a local license where you're conducting operations. There's a lot of logistical work and technical work to make sure that everything is harmonized so that you are complying with all the laws.

Q: Given the recent changes in the industry, what do you see ahead for the cannabis industries in the United States and Israel?

A: At the state level, tremendous activity. At the federal level, not much going on at this point under the current administration, but we'll see if they change their minds.

We have a lot of catching up to do in order to reach Israel, but I think there's a tremendous amount of cooperation and investment between the two countries that continue to make them classic friends and partners in another space. 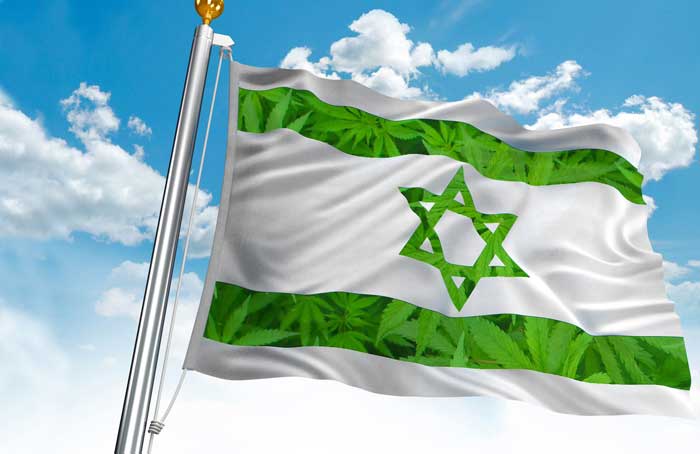