Want To Research Medical Marijuana? Israel Is Open For Business

Like newborns in an incubator, the 200-plus unique strains of plants in these computer-controlled, camera-patrolled, password-secured greenhouses are monitored around the clock. Their water, fertilizer and light are adjusted as needed, until the flowers are in full bloom. They're only harvested from their planters after a week of testing finds they are ready to leave this facility in rural northern Israel.

Orchids? Hardly. The tangy smell of cannabis permeates the buildings, where a company named Breath of Life Pharma, along with others in the local industry, is seeking to position Israel as a global hub for medical cannabis research. The active ingredients from the plants will be delivered to some of the more than 25,000 people in Israel suffering from diseases such as cancer, epilepsy and chronic pain. Breath of Life Pharma sees the number of patients growing to as many as 200,000, creating a domestic market with a value of about 1 billion shekels ($262 million).

To grow beyond that, the company and others like it plan to seek future customers among countries where such studies aren't yet permitted. Among them: the U.S., where after November's elections 29 states plus the District of Columbia allow medical use of marijuana even as federal law prohibits it. The medical market is expected to grow to $11 billion in 2020 from $5.8 billion today, according to New Frontier Data in Washington, D.C., which provides information for the global cannabis industry.

The catch is that President-elect Donald Trump's government may be less tolerant of state legalization than was that of President Obama.

"The main question right now, when it comes to marijuana policy, is whether Trump will continue the Obama approach of noninterference for both recreation and medical marijuana," said Alex Kreit, professor at the Thomas Jefferson School of Law in San Diego. "No one knows what the answer will be."

Marijuana remains a Schedule 1 drug in the U.S., which means it is illegal by federal law, regardless of whether the state allows the substance or not. With a few exceptions, medical research outside small scientific studies isn't allowed, said Eugene Volokh, a law professor at the University of California, Los Angeles. He sees Trump's administration being "more hostile" to cannabis. Senator Jeff Sessions, Trump's nominee for attorney general, has been outspoken in his opposition to legalization.

Breath of Life Chief Executive Officer Tamir Gedo says he's certain more U.S. companies will be looking to do medical pot research in the Jewish state, where it has been allowed under national law for the past decade. According to the Israeli Ministry of Health, patients can smoke the drug and ingest it in liquid form. Medical centers, approved by the government and licensed, distribute flowers, oils and edibles.

"It is going to help us in terms of bringing a lot of American companies, which want to conduct medical trials, to Israel," said Gedo. He says he produces enough pharmaceutical-standard active cannabis ingredients per year for 300 companies to carry out research on products.

Amid rapid adoption of cannabis by consumers for both medicinal and recreational purposes, the global legal marijuana market is poised to grow to $140.5 billion in 2020 from $28.8 billion in 2015, according to global marketing firm Technavio. Medicinal marijuana accounted for three-quarters of the 2015 figure.

Breath of Life plans to increase its greenhouses and production tenfold in the next 12 months. In the second half of next year, the company will open a facility to produce drug delivery systems, discover new strains and develop new medicines. It hopes to bring entrepreneurs from abroad, drawn also by "more friendly regulation and the ability to take their product to the market in half the time and half the cost than in the U.S," Gedo said. The privately held 10-year-old company says it has tens of millions of dollars in annual revenue, mostly from supplying pure active ingredients to American and European companies already coming to Israel to do clinical trials.

The Israeli government has identified medical cannabis as an economic opportunity. Agriculture Minister Uri Ariel says his ministry will research ways to best grow cannabis, and would back export of locally grown medical marijuana, currently banned under national law. The Health Ministry, which has its own medical cannabis department, is extending the number of licenses granted to growers, doctors and patients to expand the local market and also plans to support industry requests for exports.

In Colorado, where cannabis sales grew to nearly $1 billion last year, legalized marijuana was the second-largest tax revenue source, generating $2.39 billion in economic impact and creating 18,000 new jobs, according to the Denver-based Marijuana Policy Group. Saul Kaye, CEO of iCan Israel-Cannabis, which invests in the Israeli cannabis market, says marijuana can become as important to Israel's economy as technology, which contributes about 40 percent of industrial exports. Total sales abroad make up about a third of Israel's gross domestic product.

Big pharma is getting in on the act as well. Teva Pharmaceuticals Ltd., the world's largest generic-medicine company, last month entered a partnership with Tel Aviv-based Syqe Medical to market in Israel an inhaler armed with measured loads of cannabis to treat a variety of illnesses.

A stock index tracking about 50 publicly traded cannabis companies created by Viridian Capital Advisors, a New York-based financial advisory firm dedicated to the cannabis industry, has risen about 190 percent this year. After the U.S. election, the index's climb slowed in what the firm said was "a natural correction following the dramatic run-up of stock prices and greater market uncertainty following Donald Trump's unexpected victory."

"It's a rising tide that lifts all ships," Greiper said. "The business isn't going to go poof." 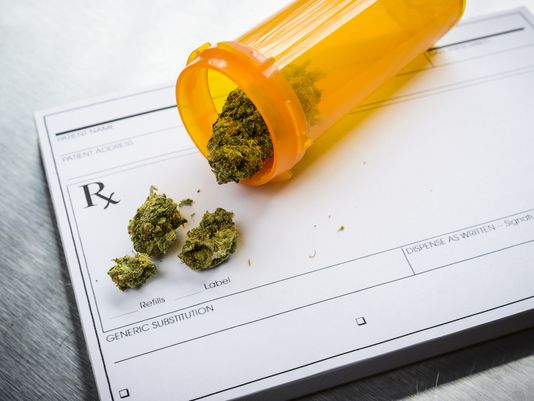