Americans who use marijuana for medical purposes in states that permit it already face the uncertainties – such as DEA crackdowns and uneven drug law enforcement – that accompany their medication's federally prohibited status. But patients in these states also bear the full weight of their medicine's costs, which must be paid entirely out-of-pocket since health insurers have refused to go anywhere near coverage for medical marijuana prescriptions.

Since the federal government designates marijuana as a Schedule 1 controlled substance with no legitimate medical use, insurers and employer-based health plans stay away from cannabis – even though it is now legal for medicinal purposes in 18 states and the District of Columbia, and completely legal in Washington and Colorado. As Kaiser Health News reports, this perpetuates a system in which patients with legitimate medical need of the drug may have to spend up to hundreds of dollars a month to fill their prescriptions:

Health insurance rarely if ever covers [marijuana] use; some patients spend hundreds of dollars a month or more on the drug. The situation may not change anytime soon, some experts say.

A typical patient might purchase an eighth of an ounce – the equivalent of about three joints – from a dispensary at a cost of $20 to $60, says Kris Hermes, a spokesman for Americans for Safe Access. But patients' needs vary widely.

"Some people only need a few hits at a time to experience a therapeutic effect," he says. "Others need to smoke several marijuana cigarettes a day or ingest it with food, which takes considerably more."

With many other medications, particularly those that are prescribed to a patient for long-term use, health insurance helps bring prescription costs down to $5-$10 per refill – a far cry from the range of prices paid by medical marijuana users. The federal government isn't yet buying the argument that marijuana can have legitimate medical uses – despite some studies that have suggested otherwise – and insurers are following suit. But in the states where medical marijuana has been legalized, voters have electorally ratified their belief that cannabis can be a boost to patient health, particularly for Americans undergoing chemotherapy and other painful procedures. 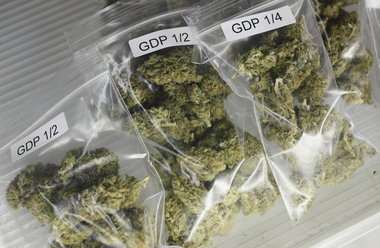