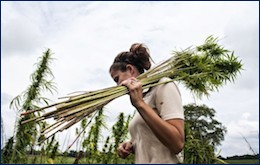 By all indications, the state’s first industrial hemp crop in decades appears to have been successful. That’s despite the fact that, this past spring, it looked as though a crop might not be planted at all. The Farm Bill allowed for research plots in states where hemp legislation had been previously passed, but the federal government held up a shipment of seeds in May. The Kentucky Department of Agriculture filed a lawsuit and eventually the seed blockage was lifted, making way for research locations around the state to plant hemp seed legally for the first time since World War II.

Adam Watson, the Industrial Hemp Program coordinator for KDA said this inaugural season has been successful in terms of getting a good harvest and getting a firsthand look at what might become a new production crop for Kentucky farmers. Currently, in addition to the state universities that are involved in various types of hemp research, there are 12 farmers working under a Memorandum of Understanding to raise hemp research plots, as well.

“For the purpose of the industrial hemp pilot programs, they are cooperators with KDA, so in the eyes of the U.S. Drug Enforcement Administration, it’s KDA conducting that research,” said Watson. As with the university plots, those growing the crop as cooperators are looking at different aspects of industrial hemp such as seed production and fiber production. But, while hemp may be in the ground, it is still on the Controlled Substances list, something the DEA would have to rectify in order for full production to begin.

“Hemp has an historical production history in Kentucky so we’re not surprised that the crop is growing well,” said Watson. “Obviously, we are still evaluating specific varieties to find out which ones are the most productive for Kentucky, and that will be a two-year process at least.” Finding just the right varieties to use is important with Kentucky’s variable weather patterns. “When we look at research (for other agronomic crops) you’ll find that varieties are evaluated over several years,” said Watson. “It’s always the hope that you’ll have a dry year, a wet year and some average years so you can see what varieties are the best average performers.”

He added that with this type of research and the state’s history of the crop, it’s almost a certainty that a reliable performing variety will be found. “It’s just going to take some time to see those varieties develop and see which ones are the best for Kentucky,” Watson said. As with other crops, tobacco in particular, the industrial hemp is almost ready to harvest although because of some of the delays in planting this year, Watson said the effect on yields will be something to look at.

“Realistically, we do expect the yields to be down,” he said. “But that being said, we do have good reports from the various projects that we did have very good growth.” Those projections have to be based on numbers from other parts of the world where production is allowed. Watson said he hasn’t come across historic documentation of hemp yields from the days when it was grown as a production crop in Kentucky, and even if the data did exist, varieties today have progressed so much from that time period that a comparison would not be accurate.

“We’re hopeful with our improved genetics and the improved methodology we have for modern agriculture, that we’ll actually see yields exceeding the era of World War II, in much the same manner we see yields in every other crop from this era that are definitely higher,” he said. Watson said even though there is a history of industrial hemp in the state, it is essentially being looked at as a new crop. “We know we have a crop that grows well. Now we have to find a way to most efficiently produce it and we’re beginning to answer those questions this season,” he said.

David Williams is one of the two University of Kentucky College of Agriculture, Food and Environment agronomists working with the hemp project. He said it was a good growing season for hemp and most other crops, as well. “There was plenty of moisture, definitely warm enough for good growth, so even with the late planting date on May 27, the crop has turned out pretty darn well,” he said. Normally that planting date would have been around the first week of May and, in theory, that could have affected yields.

But Williams said this year was one of the wettest Augusts on record, which could have made up for the late planting date by encouraging additional growth. “Next year, if it’s closer to average in precipitation we would expect to see far less rain and that would have an effect on growth, too,” he said.

Williams also said overall there were no surprises this season although some of the crop had to be irrigated at first because of low moisture levels in the soil at the time of planting. “Beyond that, it’s been a pretty worry-free season with no fungal disease problems, no insect problems, some slight competition from weeds, but nothing we weren’t able to react to and fix,” he said. “We’re very excited and anxious to continue the work next year.” 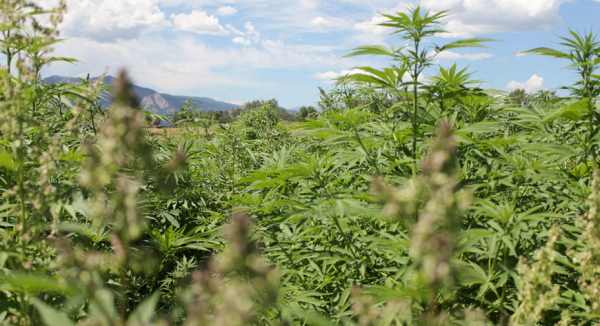