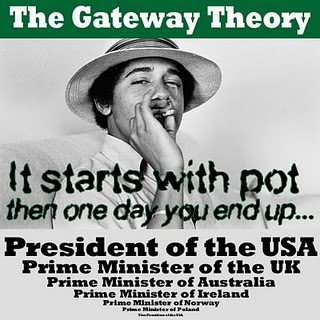 The Partnership for a Drug-Free America, in cooperation with the National Institute on Drug Abuse (NIDA) and the White House Office of Drug Control Policy, recently announced a new anti-drug campaign that specifically targets marijuana. Instead of featuring horror tales of marijuana-induced insanity, violence and birth detects, this campaign is built upon the premise that reducing marijuana use is a practical strategy for reducing the use of more dangerous drugs.

It is hardly a revelation that people who use one of the least popular drugs are likely to use the more popular ones — not only marijuana, but also alcohol and tobacco cigarettes. The obvious statistic not publicized by CASA is that most marijuana users — 83 percent — never use coca*ne. Indeed, for the nearly 70 million Americans who have tried marijuana, it is clearly a “terminus” rather than a “gateway” drug.

During the last few years, after a decade of decline, there has been a slight increase in marijuana use, particularly among youth. In 1994, 38 percent of high school seniors reported having ever tried the drug, compared to about 35 percent in 1993 and 33 percent in 1992. This increase does not constitute a crisis. No one knows whether marijuana use-rates will continue to rise. But even if they do, it will not necessarily lead to increased use of coca*ne.

Since the 1970s, when NIDA first began gathering data, rates of marijuana and cocaine use have displayed divergent patterns. Marijuana prevalence increased throughout the 1970s, peaking in 1979, when about 60 percent of high school seniors reported having used it at least once. During the 1980s, cocaine use increased while marijuana use was declining. Since 1991, when data for the CASA analysis were gathered, marijuana use-rates have increased while coca*ne use-rates have remained fairly steady.

The over-changing nature of the statistical relationship between use-rate for marijuana and coc*ine indicates the absence of a causal link between the use of these two drugs. Therefore, even if the proposed Partnership campaign were to be effective in reducing marijuana use it would not guarantee a proportional reduction in the number of people who use cocaine. To the extent anti-drug campaigns are effective, they seem to be most effective in deterring those people who would have been fairly low-level users. There is no reason to believe that anti-marijuana messages of any sort would deter many of those marijuana users — currently 17 percent of the total — who also develop an interest in coc*ine.

Nor is there reason to believe that the Partnership’s new campaign will actually reduce the overall number of marijuana users. For a decade now, American youth have been subjected to an unparalleled assault of anti-drug messages. They have seen hundreds of Partnership advertisements, on television and in the print media. They have been urged to “just say no” by rock stars, sports heroes, presidents and first-ladies. They have been exposed to anti-drug educational programs in the schools. Yet this is the same generation of young people that recently began increasing its use of marijuana. It seems unlikely that many of them will be deterred by hyperbolic claims of marijuana’s gateway effect, particularly when it contradicts the reality of drug use they see around them.

If the creators of American drug policy are truly interested in reducing the risk of marijuana users using other drugs, they should take a closer look at Holland, where drug policy since the 1970s has been guided by a commitment to diminishing any potential gateway effect. Wanting to keep young marijuana users away from cocaine and other “hard drugs,” the Dutch decided to separate the retail markets by allowing anyone 18 years of age or older to purchase marijuana openly in government-controlled “coffee shops” which strictly prohibit the use and sale of other drugs.

Despite easy availability, marijuana prevalence among 12 to 18 year olds in Holland is only 13.6 percent — well below the 38 percent use-rate for American high school seniors. More Dutch teenagers use marijuana now than in the past; indeed, lifetime prevalence increased nearly three-fold between 1984 and 1992, from

4.8 to 13.6 percent. However, Dutch officials consider their policy a success because the increase in marijuana use has not been accompanied by an increase in the use of other drugs. For the last decade, the rate of cocaine use among Dutch youth has remained stable, with about .3 percent of 12-18 year olds reporting having used it in the past month.

In the United States, the claim that marijuana acts as a gateway to the use of other drugs serves mainly as a rhetorical tool for frightening Americans into believing that winning the war against her*in and coc*ine requires waging & battle against the casual use of marijuana. Not only is the claim intellectually indefensible, but the battle is wasteful of resources and fated to failure.