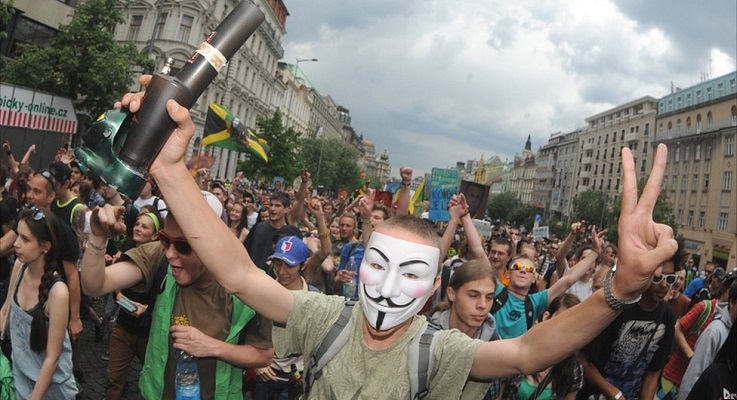 Some 5,000 mainly young people took part in the Million Marijuana March 2015 in the center of Prague for the legalization of cannabis growing.

The police imposed several fines for marijuana possession and smoking on the spot, but no incidents accompanied the march, the police patrol commander told the Czech News Agency.

The march started on Karlovo náměstí (Charles Square) and continued across Wenceslas Square to ŠtvaniceIsland where it culminated with celebrations.

The main demand of the 18th Million Marihuana March is the legalization of the growing and possession of cannabis and its products for personal use and not only for medical treatment.

The participants, many of whom were wearing T-shirts with the symbol of a hemp leaf, started to meet long time ahead of the march. Some of them carried flags or banners with slogans in support of the legal use of marijuana.

The march was headed by a vehicle with a music band. It was decorated with symbolic hemp leaves and a sign reading “Hemp is the God’s gift, my granny said.”

People were dancing to music and chanting “legalization.”

The event was staged by the civic association Legalizace.cz.

Hemp belongs to all people and by its anti-hemp policy the Czech Republic only supports the black market, its chairman Robert Veverka said.

Marijuana is still illegal in the Czech Republic, but a new law has enabled the use of hemp/cannabis for medical purposes since April 2013. However, Czech firms are allowed to import hemp only, not to grow it.

Due to problems with supplies, only few people can buy hemp legally in pharmacies so far.

Hemp can help patients suffering from multiple sclerosis, dementia and cancer and attenuate chronic pain as well as AIDS-related troubles.

The Health Ministry plans an amendment to allow the hemp treatment of children.

Marijuana is the most widely spread illegal drug in the Czech Republic. According to polls, more than a half of Czechs aged from 15 to 34 years have ever used it.

Veverka said today’s march should also express disagreement with the police raids on the owners of grow and florist’s shops. The police accuse them of illicit spreading of drug addiction by selling hemp seeds and providing information on hemp growing.

The march was supported by the Pirate Party and the Greens. 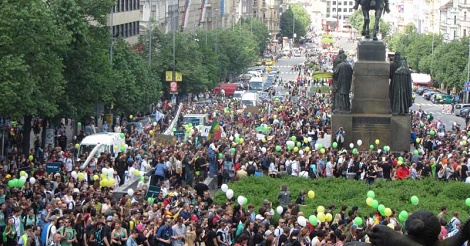 Greece Hopes Its Economy Can Get High From Medical Weed