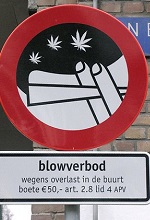 The last time Derrick Bergman came to Amsterdam to buy cannabis, he did so behind a locked door with a long, thick curtain obscuring his activity from the canal-lined residential street outside, in the quiet Lastage neighborhood. The secretary of the Netherlands’s Union for the Abolition of Cannabis Prohibition, Bergman comes here to weekly gatherings of a two month old and seriously clandestine “cannabis social club” called the Tree of Life, because it’s the only place in town he can find one of his favorite strains: Super Silver Haze.

Since 1976, authorities across the Netherlands have chosen to openly ignore that cannabis use is illegal here, and they prosecute no one in possession of less than five grams of marijuana for personal use. The policy, called gedoogbeleid, is known as the “Dutch model,” and it’s why hundreds of “coffee shops” sprung up across Amsterdam and the Netherlands, luring marijuana connoisseurs from across the globe to one of the few places they could roll and smoke a joint without fear. But that’s no longer the case.

Cannabis with more than 15 percent of the THC that makes it intoxicating is now under consideration to be reclassified as one of the “hard drugs” that come with stiff penalties. The government has also forced coffee shops where marijuana is sold to choose between alcohol and pot, prompting many to choose the former. Amsterdam once played host to nearly 300 coffee shops, of more than 1,000 scattered across the country. There are now fewer than 200 in the city and only 617 nationwide. While it’s always been illegal to grow marijuana in the Netherlands, authorities passively allow coffee shops to sell weed, often pretending not to know where the shops’ cannabis comes from.

But no longer. New laws target even the smallest of marijuana growers in Holland. In the past, people could grow up to five plants without fear of retribution. In 2011, the government issued new police guidelines and declared anyone who grew with electric lights, prepared soil, “selected” seeds or ventilation would be considered “professional.” It’s a significant change, as professional growers risk major penalties, including eviction and blacklisting from the government-provided housing in which more than half of the country’s citizens reside.

The result: Coffee shops are increasingly buying buds from criminal organizations willing to absorb the risk of prosecution by growing large amounts of cannabis in shipping containers buried underground, with little regard for quality or mold abatement. “It’s amazing how bad the quality has become,” says Bergman. “And the price is up. It’s what we’ve all predicted.”

That’s why Bergman traveled from his native Eindhoven to Amsterdam on a recent Monday, both to convene with other activists and to pick up five grams (the legal limit) of Super Silver Haze. Because the club is not-for-profit, its members can focus their efforts on finding and buying the best product and providing it to their members at much better prices than the coffee shops.

Modeled after a proliferation of similar establishments in Spain, the social clubs offer a new way to subvert the harsher laws. As in Holland, cannabis is illegal in Spain, but the government doesn’t prosecute anyone for personal consumption and there’s no implicit limit on the number of plants a person can grow, meaning the government doesn’t care if you grow one plant or 15. In fact, signs point to the government not caring at all. Barcelona is developing a reputation as “the new Amsterdam,” meaning the old Amsterdam is losing out on a significant source of revenue: drug tourists.

Inside an Amsterdam coffee shop called The Rookies, 22-year-old John Bell rolls a spliff of tobacco and a strain called Dutch Kashmir, which Bell can’t find in his native Liverpool. Bell has been to Amsterdam 11 times in the past three years, not because it’s hard to find weed in the U.K., but because the quality here is better. He wouldn’t visit the city at all if not for these coffee shops and Amsterdam’s quasi-legal cannabis, adding: “It’s too expensive to drink here, for a proper night out.”

Such drug tourists represent a major element of the city’s economy. The union of coffee shops in Maastricht commissioned research in 2008 that found foreign visitors to the city’s coffee shops spent money in other businesses there as well: €140 million (approximately $170 million) annually. It’s a significant number and one of the reasons government officials in Amsterdam have fought to keep the coffee shops from going out of business.

About a third of all visitors to Amsterdam step into one of its coffee shops at some point; nationally, the number is one in five. Banning such visitors would hit tourism revenues hard, chasing off travelers who tend to be well-behaved. “If you’re really a deadbeat hippie punk, a no-money kind of guy, how are you going to afford a ticket to Amsterdam?” Bergman says.

Cities such as Maastricht, on the other hand, have banned foreigners from coffee shops since 2005. The result, insists Bergman and other critics, is a proliferation of street dealers. People still come from neighboring countries to score marijuana, but now they stock up and head back home in a day, instead of spending any time in local hotels and restaurants.

How did Holland get here? Some trace the backlash to 9/11. The world’s global panic about terrorism in the wake of the attacks on New York City and Washington led to a surge in the power of conservative political parties in places as far away as the Netherlands. Ever since Holland’s People’s Party for Liberty and Democracy began to consolidate influence here, its leaders have pushed for zero tolerance drug laws. “Our last prime minister [Jan Peter Balkenende] believed in his heart that weed comes from Satan,” says Mila Jansen, a legendary figure in Amsterdam, who once invented a way to make hash in a washing machine.

Other factors influencing the government crackdown are pressure from outside nations, especially France, which has pushed the International Narcotics Control board to sanction Holland for violating international treaties on drug laws with its permissive pot policy. Ironic, argues Bergman, because the rate of marijuana use is twice as high in France as it is in the Netherlands, and Holland has one of the lowest number of drug-related deaths in Europe.

“Hard drugs are still illegal in Holland, but we also see that there are still many people who want to try drugs on occasion,” said the city’s mayor, Eberhard van der Laan, in a statement provided to Newsweek. “This is a reality we cannot ignore. And this is one of the key principles to our country’s drug policies: Drug use is first and foremost an issue of public health. By not focusing on the criminal aspects of drug use, as is the case in many other countries, we can be more effective when it comes to informing the public, testing drugs and prevention.”

Unfortunately, van der Laan’s federal counterparts don’t agree. They also don’t see that prohibition amounts to little more than, as they say here, “mopping with the tap on.”

Now, activists like Bergman are trying to convince Holland to consider the American model—the legalization and regulation of all components of marijuana cultivation and sale. Citing Oregon’s law, which allows residents to grow as many as four plants, Bergman says: “I’m sort of jealous.”

That’s because America seems to be learning from Holland’s mistakes. Holland’s passive-aggressive policy doesn’t stop illicit activity or drug tourism or make anyone safer, say activists: It actually has the reverse effect. Quasi-legalization leaves too many entry points for criminals to line their own pockets from the drug trade. State by state, the U.S. is legalizing pot with initiatives that clearly spell out who is allowed to manufacture, distribute and consume it. That’s the key to a successful policy, and it’s one Dutch activists are now working to implement in their own country, before things swing too far the other way. 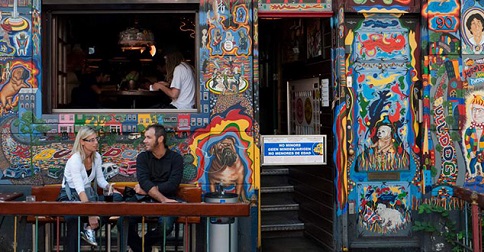