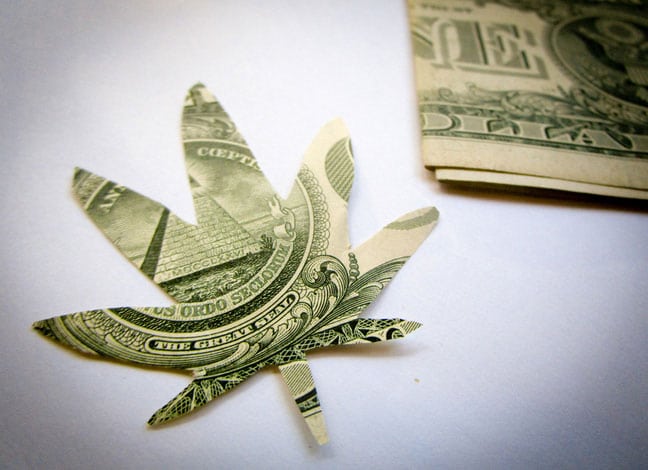 Twice a week, Emmett Reistroffer carefully watches his array of security cameras. When the coast is clear, an armed guard walks into his facility.

When the guard — a former law enforcement officer — enters, Reistroffer sits down with an accountant and the guard to count stacks of cash.

Riestroffer is the Director of Compliance at Silver State Wellness, a state-legal Nevada cannabis business.

The guard is a heavily armed cash courier, and this highly-choreographed meetup is the reality of doing business in Nevada’s cannabis industry. Riestroffer is just trying to pay Silver State’s vendors on time — and everything has to be in cash.

While marijuana is legal in a number of states, the federal government still considers it an illegal, Schedule I drug. Because of that, many marijuana startups — though fully compliant with state law — are shut out of the banking system.

Marijuana companies that deal with the plant directly, like cultivators, distributors, and dispensaries, are forced to come up with creative solutions to do business on an all-cash basis. That’s where the armored guards come in.

“The process is highly secure,” Riestroffer told Business Insider. “We plan the cash drops when the facility is relatively empty.”

Riestroffer said the word “cash” never appears in any of his text messages or emails to the courier and vendors he needs to pay.

While Riestroffer wouldn’t say exactly how much cash he handles on the twice-weekly drops, it’s upwards of $100,000. He said other cannabis businesses he knows of are handling cash “into the millions.”

“We try and minimize as much as possible who needs to know, and what the courier is coming to do at our facility,” he said.

Beyond the obvious public safety and theft issues of piles of cash moving around Las Vegas in armored trucks, it’s “a huge burden on my time,” Riestroffer said, adding that he has to account for every single transaction purely in cash.

It’s also a problem for paying vendors, many of whom don’t want or won’t accept cash payments, Riestroffer said.

No banks and no loans equals lots of problems
The marijuana business is booming in the US. According to a report from the investment bank Cowen, legal marijuana is set to hit $75 billion in sales by 2030, putting it on par with soda consumption. Marijuana cultivators are now listed on the NASDAQ, have former politicians on their board, and are backed by heavyweight investors like Leon Cooperman.

But for many big institutions, the risks of banking and lending to the cannabis industry under the current federal mandate just aren’t worth it, especially with all the extra paperwork and scrutiny it can generate.

“For cannabis businesses, this means that access to the basic financial products like checking and savings accounts can be elusive,” John Hudak, a senior fellow at the Brookings Institution who studies issues pertaining to marijuana legalization, told Business Insider.

Tyler Beuerlein, a VP at Hypur, an Arizona-based fintech startup that acts as a middleman between banks and cannabis companies, told Business Insider that he believes there are “less than 30” banks willing to do business with the booming cannabis industry in the US.

That means the costs of doing business and remaining compliant with the byzantine patchwork of state and federal laws guiding the cannabis sector are much higher than in any other industry.

There’s also a higher risk of fraud in cash-only businesses, according to Hudak. As a result, cannabis businesses have had to resort to creative accounting in order to do the things any normal business would, like paying employees and filing taxes.

“The way it works in Nevada, the employees are actually contractors of a parent organization,” Riestroffer said. “The contractors work for the facility, but they’re really employed by another entity.”

That system allows Silver State to pay employees regularly through direct deposit, which Riestroffer said is “really lucky.” Other companies are forced to pay employees in cash, which creates its own obvious headaches for state regulators.

Because of a section of the federal tax code that doesn’t allow cannabis companies to deduct business expenses, these startups end up paying an effective tax rate “3.5 times higher than their neighboring businesses,” Keegan Peterson, the CEO of Wurk, a Colorado-based payroll and compliance firm, told Business Insider.

John Cochran, the CEO of Loudpack, a marijuana distribution and cultivation company based in the Golden State, said there are a number of credit unions willing to bank his business.

But in the “old days,” which in the marijuana industry means two or three years ago, “I’m sure there were lots of people that paid their employees in cash in some form,” he said.

While credit unions will open basic checking accounts for California cannabis businesses, institutional banks still won’t lend to the cannabis industry, which hurts entrepreneurs across the board.

It’s a question of “whether the juice is worth the squeeze” for the big banks, Cochran said. Banks don’t want to invite the scrutiny that lending to a federally illegal industry would bring.

To finance a new business, firms usually have two basic options: they can use debt, by taking a loan and negotiating an interest rate with a bank, or they can trade equity by hitting up a venture firm — a process known as dilution.

Instead of going to banks and underwriting a loan backed by whatever assets a company has, most cannabis companies raise money from wealthy individuals who are willing to take risks that banks won’t.

But in order to protect their capital in what amounts to a risky investment, these wealthy individuals — much like angel investors or seed-stage venture capital firms — want something for their money. That something usually amounts to a huge equity stake, Kris Krane, the president of 4Front Ventures, a firm that invests and manages a network of marijuana dispensaries across the US told Business Insider.

For example, 4Front was recently granted a license to open a dispensary in Western Massachusetts.

But 4Front can’t get a loan to build in the state, so it’s forced to hit up private investors. “We basically have to take dilution and sell pieces of the company we otherwise wouldn’t have,” Krane said.

For a firm like 4Front, which seeks to purchase many licenses in states with legal marijuana to build a network of dispensaries, each new license means more equity dilution, according to Krane.

“We all own less of our company then we would have owned if we had access to traditional banking and lending,” Krane said.

For well-connected and well-capitalized companies like 4Front — which is composed of Wall Street veterans — this is a surmountable problem.

A lack of institutional lending hurts small business owners the most
Where it really hurts, according to Krane, is with the “mom-and-pops” and small businesses.

In states like Massachusetts, which allocate a certain percentage of their dispensary licenses to “equity applicants,” who are below certain income thresholds or who may have a past drug conviction, the lack of access to lending puts these license holders at a disadvantage.

“They’re going to wind up owning substantially less than their well-capitalized counterparts,” Krane said. Like 4Front, these applicants will be forced to rely on private investors to finance their dispensary, instead of banks.

These applicants, who may not have relevant management experience and who may be less connected to networks of high-net-worth investors, can get taken advantage of by private investors.

It puts equity applicants and small business owners in a position where “it’s almost impossible for them to keep majority control of their company,” Krane said, “because they don’t have that access to institutional lending where they could just get a loan and do this on their own and keep a larger chunk of that business.”

Hudak agrees. “For those without access to liquid capital, they are forced to recruit more investors than a traditional business would need,” which means they’ll end up losing more control of their operation.

Institutions “Want to be at the table”
Right now, the only way for cannabis companies to get institutional money is to tap into public markets in Canada, where marijuana is set to be legalized federally in October. But US institutions want the “upside” of what’s going on in Canada, Cochran said — especially as bigger public cannabis companies in Canada see their valuations soar as they go on acquisition sprees.

“There’s a lot of institutional money in the state that wants to be at the table,” Cochran, the CEO of Loudpack said.

Senators Cory Gardner and Elizabeth Warren have introduced the bipartisan STATES Act, which would essentially provide an exception from the Controlled Substances Act for states that choose to legalize marijuana, allowing banks to lend to the industry.

President Donald Trump indicated that he’d support the legislation if it crossed its desk.

“The STATES ACT could theoretically solve the banking issue,” Krane, of 4Front said. “But it won’t solve all of our problems.”

Until then, the cannabis industry will have to remain adaptable — and creative.

Canada: In Nova Scotia, Prepare To Drive A Long Way For...

Jeff Sessions Trumped — Are Marijuana Stocks About To Skyrocket