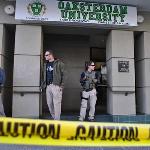 On April 21, I taught what may have been my final class at Oaksterdam University. For the better part of the past 3½ years, I have lectured at Oaksterdam. My 90-minute class focused on the peer-reviewed science establishing the safety and efficacy of cannabis as a therapeutic agent — science that the federal government has ignored and continues to ignore despite its public commitment to “scientific integrity.”

Several thousand paid students attended this and other core classes. They each left with a far greater understanding of the cannabis plant than when they entered.

That was the point of the Oaksterdam University institution. Its purpose was to provide those who enrolled with scientific and legal information regarding how to be compliant with the medicinal marijuana laws of their state, as well to provide quality training for those considering becoming involved in the nascent medical cannabis industry — an industry that is becoming increasingly accepted in various states.

Nonetheless, on the morning of April 2, a small army of federal agents — including representatives from the U.S. Marshals, the Drug Enforcement Administration, and the Internal Revenue Service — descended upon Oaksterdam’s brick-and-mortar facility.

They seized instructors’ curricula and student records, among other items. Federal authorities also froze Oaksterdam’s bank accounts, resulting in immediate layoffs to the facility’s 40-plus full-time and part-time staff members. Why? As of yet, no one in a position to know is talking.

Those responsible for the raid of Oaksterdam and other legally compliant cannabis-centric establishments “ought to be in therapy, not in office,” he said.

His outrage is understandable.

Conversely, the federal government engages in intimidation and the use of force to impose their morally bankrupt prohibition policy — a policy that is now opposed by a plurality of the American public.

And they do so under the veil of secrecy — by executing raids and seizing assets via sealed warrants, signed by unnamed judges, ordered by U.S. attorneys and overseen by an attorney general, all of whom have “no comment.”

Will Oaksterdam University be able to continue? That remains to be seen. No doubt it intends to, albeit with a skeleton staff of unpaid volunteers.

But whether it can thrive under such federal tyranny and demagoguery is another matter, and it is one that should concern all of us.

Ohio In Danger Of Missing Sept. 8 Deadline For Medical Marijuana