One of the country's most well-known think tanks is calling out United States Attorney General Jeff Sessions for his repressive attitude toward cannabis, particularly medical marijuana. On October 25, the Brookings Institution published an essay criticizing Sessions for his "biases on the issue, a division of opinion between him and the president he serves, and a federal government effort to stand in the way of the free conduct of research" with regard to growing medical marijuana for research purposes.

The Brookings Institution's beef with Sessions stems from remarks he made earlier this month, when he answered a question from Senator Orrin Hatch during a Senate Judiciary Committee hearing about federally approved cannabis studies. When Hatch asked Sessions for an update on the 26 applications to grow cannabis for medical and scientific research, Sessions responded, "I think it would be healthy to have some more competition in the supply, but I don't — I'm sure we don't need 26 new suppliers."

Although some would be surprised by Sessions' interest in having any more federally approved cannabis cultivations, considering his pot-hating past, Brookings authors John Hudak and Christine Stenglein weren't impressed, questioning his logic and efforts to delay the approval process by the Drug Enforcement Administration and National Institute on Drug Abuse, and calling it a "weak response" in the following:

Simply because there are 26 applications does not mean the Justice Department has to approve 26 applications. DEA, the agency charged with initially evaluating these applications, surely evaluated each application for quality, safety, security, necessity, and capacity, among other criteria. Experts have evaluated these applications, and the Attorney General should let those experts make the determinations. DEA and NIDA are sufficiently equipped to evaluate the protocols of each applicant, as they have been administering and overseeing the current producer for decades. In fact, the career officials at those agencies are better positioned to make those decisions than an Alabama Senator who just got a political promotion.

At the hearing, Sessions admitted that it wasn't the DEA holding up the approvals; it was him. "I have raised questions about how many [licensees there should be]," he said.

Currently, there is only one federally licensed cannabis cultivation in the country, housed at the University of Mississippi. The Ole Miss cultivation has been repeatedly criticized by cannabis advocates, growers and scientists alike for its lack of strain diversity and potency, and its failure to reflect consumption trends around the country.

In March, Sue Sisley, who is heading a study on how using cannabis affects post-traumatic stress disorder among military veterans, told PBS that the cannabis she received from Ole Miss — nearly two years after being awarded the study grant — was moldy and didn't match the potency she requested. "It didn't resemble cannabis. It didn't smell like cannabis," she said. "They weren't able to produce what we were asking for."

Hudak and Stenglein explain that in this rare instance, the DEA is actually the more interested party in learning about pot's medical benefits:

In its announcement opening the door for applicants to grow cannabis for research, DEA specified how the quantity of suppliers would be decided: facilities would be approved which are "necessary to provide an adequate and uninterrupted supply of cannabis." In his testimony, the Attorney General said nothing about the process for achieving the level of supply researchers need. It's not only that each application must be evaluated on its own merits. They will collectively be part of a system that must provide a reliable supply–the core problem DEA sought to address in ending the monopoly and one that merits a more informed analysis.

The authors end their essay by calling on President Donald Trump to follow through on his previously expressed support for a state's right to legalize cannabis, even though he's eased back since taking office. "It is time that the Attorney General gets out of the way of the free conduct of medical research. It is time that the Attorney General stops coming between patients and answers to important medical questions. And if he won't, the president should find someone who will," the essay concludes.

Sessions has been causing quite the shitstorm for the cannabis industry since taking the position of the country's most powerful prosecutor, questioning the legality of a state's rights to legalize and regulate commercial cannabis. In April, governors of Alaska, Colorado, Oregon and Washington sent a letter to Sessions and Secretary of the Treasury Steven Mnuchin, urging them to respect a state's rights and to consult with state governments operating under 2013's Cole Memorandum — a set of guidelines from the Obama Administration designed to give federal prosecutors clarity on how to operate in states that have legalized retail cannabis — before making any enforcement changes.

Although neither Sessions nor the United States Department of Justice have made any changes to federal enforcement of legalized cannabis, the AG's response to the four governors voiced his concerns with commercializing pot, which he and the DOJ still consider a Schedule I substance. After meeting with Sessions, Governor John Hickenlooper told cannabis-industry members that the AG said he might attempt federal enforcement against the sale of marijuana if he had more resources or if the industry saw substantial growth. 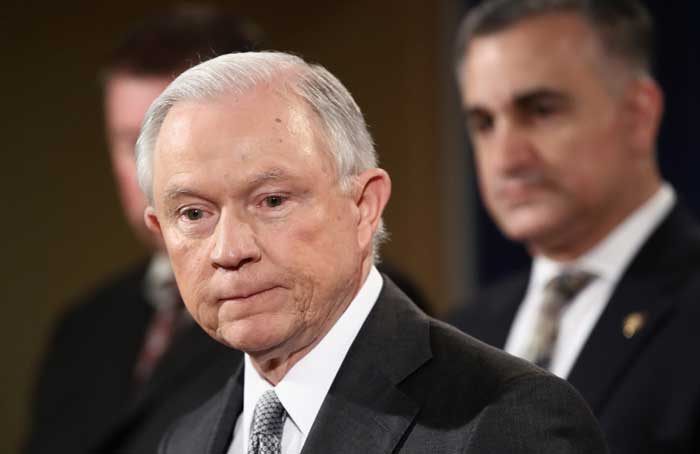