Connecticut Hospice Will Use Marijuana To Reduce Opioid Usage

Branford, CT — Hundreds, maybe thousands of stories have been written and told in the past few years about the impact the opioid crisis is having on young people, and their families, in the state of Connecticut.

On Monday, at The Connecticut Hospice, Inc. of Branford, state leaders and medical experts said there's another population being heavily impacted by the crisis — older people in need of pain relief.

"The fastest growing population" of those addicted to opiates "are those 55 and older'' who are taking pain medication, or opiates after having oral, hip or knee surgery, Gov. Dannel P. Malloy said.

Malloy, U.S. Sen. Richard Blumenthal, Consumer Protection Commissioner Jonathan Harris, and others were at the hospice to announce that it has been approved by the federal government to conduct comprehensive medical marijuana research with the goals of improving pain management and reducing opioid usage in palliative care.

Dr. Wen-Jen Hwu, professor of Medical Oncology at the MD Anderson Cancer Center in Houston, Texas and Chairman of The Connecticut Hospice, Inc.'s Professional Advisory Committee, said the goals of the medical marijuana research project are to:

"Anything that can relieve pain and suffering is something we want access to," Hwu said.

Hwu said those who participate in the study won't use medical marijuana instead of opiates. Instead, the marijuana would be used in conjunction with opiates, with the goal of having the opiate medication lessened.

Noting that many people spend their last days at hospice, Hwu said she's hopeful the research project, "will help us fulfill our mission to improve their quality of life. Everyone deserves to die with dignity."

One-third of Americans who have taken prescription opioids for at least two months say they became addicted to, or physically dependent on, the powerful painkillers, according to a new Washington Post-Kaiser Family Foundation survey released earlier this month.

James Prota, vice president and director of pharmacy for The Connecticut Hospice, said the study will also involve examining dosage levels and examining other constituents and cannabinoids in marijuana.

"We will be studying a whole spectrum of ingredients including cannabidiol, the non-psychoactive compound in marijuana, and the effects they have," Prota said.

Patients will elect whether or not to participate in the research project and the data collected, by the hospice nurses on each shift, is non-invasive.

State officials have already identified the potential of marijuana for reducing opiates in pain management therapy.

Malloy said the study, along with one just announced where medical marijuana will be used in place of oxycodone in patients suffering from pain from multiple rib fractures at St. Francis Hospital and Medical Center in Hartford, are "important" initiatives being undertaken in the state.

"I would argue that we have the most comprehensive medical marijuana program in the country,'' said Malloy, who added, "We took our time and did it right."

Additionally, the maximum allowable monthly amount is 2.5 ounces unless a physician indicates a lesser amount is appropriate.

Earlier this year, Malloy signed a law that gives children under the age of 18 access to non-smokeable medical marijuana.

The new law, which went into effect on Oct. 1, gives minors with severe epilepsy and terminal illnesses access to marijuana after the approval of two doctors.

The governor said the fact the a study on how medical marijuana may help those suffering from chronic pain, including those whose lives are nearing the end, means a lot to him.

"My mother many years ago died in hospice care," said Malloy. "For all of you who work here — thank you for what you do."

Harris said the progress the state has made on the medical marijuana program "has given the medical community confidence to do this kind of research.

"As the governor said," Harris continued, "We have the first and most highly regulated model in the country."

Blumenthal, who said that "some of the most meaningful moments of my life have been spent at this place," saying goodbye to loved ones, said the work Connecticut is doing on medical marijuana is "ground-breaking, and addressing a crisis in our society.''

But Blumenthal also told the Hospice audience there is a challenge for proponents of medical marijuana ahead — namely that President-elect Donald Trump's nominee for attorney general, Jeff Sessions, is on record of being an opponent of any kind of marijuana legalization.

Noting that 29 states have now some sort of medical marijuana programs in place Blumenthal said that Sessions, if he is confirmed as attorney general, "is in for a fight," if Sessions tries to revoke federal approval of this program.

"I will take to Washington this place, this research," Blumenthal told his audience. "I will take back all the work we are doing in Connecticut to help save lives through medical marijuana." 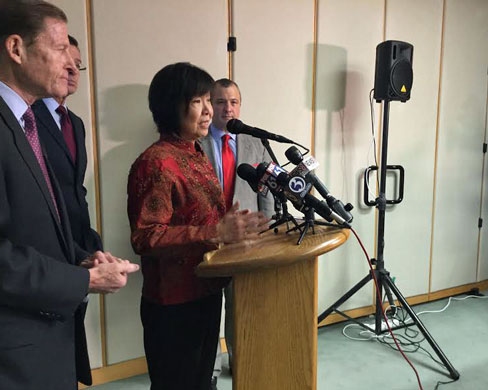