The boat's engines are powered completely by a biodiesel fuel source[1]. This fuel is derived mainly from animal fat, soybeans, or other forms of biodiesel fuel[1]. The powerboat itself is a 78-foot dramatic-looking wave-piercing trimaran, designed by Craig Loomes Design Group Ltd, with two 540 hp Cummins Mercruiser diesel engines, fueled with 100% Biodiesel, and is made mostly of carbon composite. It cost $1.25 million, which was mostly funded by generous sponsors. When asked, "Regrets about the cost of it all?" Pete Bethune replied "No...You know, I do have the coolest boat in the world. The floor is made of hemp, and instrument panels are strengthened with hemp fibre. 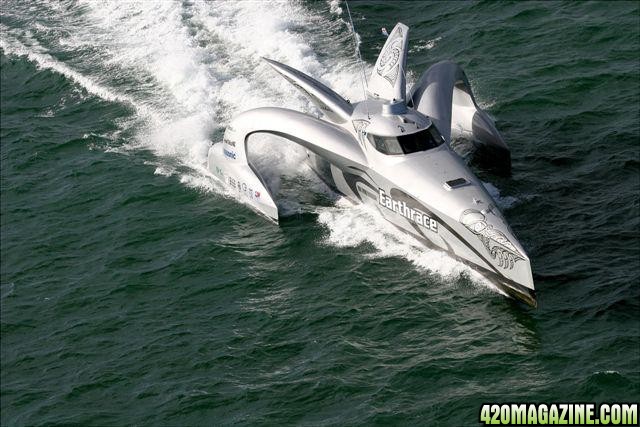 Led by New Zealander Pete Bethune, Earthrace intended to showcase environmentally friendly technologies such as low-emission engines, non-toxic antifouling and efficient hull design. The boat pierces waves instead of riding on top of them, which both results in a smoother ride and allows the boat to run at high speeds, even in rough seas. The current record of 74 days, 20 hours, 58 minutes was set by British boat "Cable & Wireless" in 1998. Earthrace made its first voyage on February 24, 2006 and planned to begin the record attempt trip on March 1, 2007.
Earthrace is a 78 foot alternative fuel powered wave-piercing trimaran; part of a project to break the world record for circumnavigating the globe in a powerboat—and to do so using only renewable fuels.[1]

The record attempt
The attempt originally departed from Barbados on March 10, 2007 but encountered significant delays include problems with the propellers and other mechanical problems. A problem with an engine off Palau caused an 8-day delay because of the remoteness.[3] On night of March 19, 2007, while around 22km offshore from Guatemala, Earthrace collided with a local fishing boat. No Earthrace crew were hurt, but one of the three crew members from the fishing boat was killed.[4] The crew was absolved of any responsibility after a 10-day investigation during which they were held.[5] The delays prevented Earthrace from completing the circumnavigation in record time, but because Earthrace took an official start time when leaving San Diego, the team decided to "restart" with this new start/finish line. They departed San Diego on 7 April 2007 and needed to return by 21 June to break the record. [3] However, the attempt was abandoned on 31 May 2007 after a crack was discovered in the hull shortly after leaving Malaga, Spain. [6]
Last edited: Dec 26, 2007
T

That is an amazing machine......created by an amazing plant :smokin:
In a closed society where everybody's guilty, the only crime is getting caught. In a world of thieves, the only final sin is stupidity -

Earthrace Eco-Boat Prepares to Make a Stop in the BVI