Shalimar, Fla. - It's called CBD Oil: short for Cannabidiol. And it was specially delivered this week to a little boy, JJ, short for Jonathan Junior.

The parents of the nine year-old were presented with the first-ever delivery of cannabis oil in Northwest Florida. Their son was diagnosed with a rare form of epilepsy called Dravet syndrome, an incurable disease that can cause hundreds of varying seizures every day. For Jonathan and Chloe Sampley, it's a last resort.

"It's been a battle for many, many years for us," Chloe Sampley, JJ's mother, said. "JJ is now nine. He started having seizures when he was four months old. We had been through so many medications, eight different medications; a simulator in his chest that sends electrical impulses to his brain. We'd exhausted everything."

The exchange was done at State Representative Matt Gaetz's local office. The legislator had sponsored the 2014 medical marijuana law that allowed the use of low THC marijuana for children.

"So often in politics we sensationalize conflict and partisanship and name-calling," Rep. Gaetz said. "But this was one circumstance where the power of a family's story touched the hearts of people who were elected to serve, and we did something that will improve quality of life."

The company that brought the product in, Surterra, grows cannabis in Tallahassee and after it's refined and produced into a low-level THC product like CBD oil, it's distributed to approved patients like JJ.

They believe the oil will help suppress his seizures, and allow him to do something he's never done: speak.

Because Cannabis oil is still a schedule one drug, carrying it across state lines is a felony. 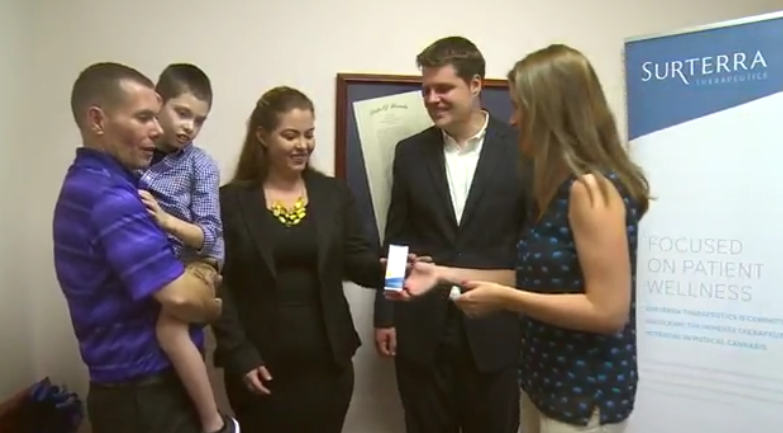