Once a month, a cardboard box from Colorado appears at the office of a conservative Christian lawmaker in central Georgia, filled with derivatives of marijuana, to be distributed around the state in the shadows of the law.

Operating in ways he hopes will avoid felony charges of drug trafficking, state Rep. Allen Peake is taking matters into his own hands. He's shepherding cannabis oil to hundreds of sick people who are now allowed by the state to possess marijuana, but have no legal way of obtaining it.

"We're going to do whatever it takes to be able to help get product to these families, these citizens who have debilitating illnesses," Peake said. He spoke with The Associated Press in his Macon office, where he runs his business, his campaign operation and his underground medical marijuana network.

Peake has successfully championed the creation and expansion of Georgia's medical marijuana program, which now provides low-THC cannabis oil to more than a thousand patients. Enrollees can have it, but they can't cultivate, import or purchase the drug.

This straight-laced Republican is about the last person many would expect to take up such a cause.

He's the CEO of one of the nation's largest franchise restaurant businesses, with more than 100 locations including Cheddar's and Fazoli's. He says he runs this business on Biblical principles and donates to Christian charities, a practice that led him into the world of cannabis when he began helping families with the costs of moving to Colorado for the legal access to treatments they couldn't get in Georgia.

Those connections led to the arrival each month of boxes on his office doorstep, filled with bottles of cannabis oil of varying concentrations within Georgia's now-legal THC limit.

Peake says he doesn't know who brings it into the state, and doesn't ask.

Marijuana remains a federally outlawed Schedule 1 narcotic, even though 29 states now have comprehensive medical marijuana programs. Seventeen others, including Georgia, allow the use of marijuana products for medical reasons in limited situations or as a legal defense, according to the National Conference of State Legislatures.

In 2009, President Barack Obama instructed the Department of Justice not to prosecute people for possessing or distributing medical marijuana, a policy President Donald Trump has not changed.

But transporting marijuana across state lines? That remains a felony.

"Quite frankly, I don't know how the product gets here," Peake said.

He's a certified public accountant who went to theology school, but has an adventurous side - running competitively, scuba diving and recently splurging on a Tesla Model S, which can zoom from 0 to 60 mph in 2.5 seconds.

Thrill-seeking has cost him at times: In 2015, he publicly acknowledged having had an account on the adultery dating site Ashley Madison. After apologizing to his constituents and thanking his wife for her "powerful and merciful gift of forgiveness," he went right back to legislating.

Each time one of the nondescript boxes arrives, Peake makes a significant donation to a foundation in Colorado that supports research of medical cannabis. He can't make a direct payment, because that would be illegal. But with his donations of about $100,000 a year, he and his wife are able to supply the oil to hundreds of patients across Georgia.

"I'll never recover that money," but the satisfaction of helping people makes it all worthwhile, he said.

If Peake did try to recoup the money, say by selling the oil, he could face charges of drug trafficking. By paying for it himself and giving it away for free, he narrowly skirts the law, which does not prohibit the gifting of cannabis oil.

It was Peake's bill in 2015 that established Georgia's medical cannabis program, which allows people with qualifying diagnoses to possess cannabis oil with less than 5 percent THC, the chemical that gets users high. It was a first step, acknowledging Gov. Nathan Deal's refusal to legalize the cultivation of marijuana within Georgia.

Peake also was instrumental in passing another step, now awaiting Deal's signature that would expand the list of qualifying conditions. Persuading state lawmakers to legalize cultivation, production and sale of cannabis oil in Georgia remains a distant goal, but Peake thinks enabling more patients to get the drug meanwhile can only help.

About 1,300 patients are currently enrolled, and other lawmakers have joined his quasi-legal enterprise: At least 20 state senators and representatives have referred their constituents to him, Peake says. Even some who voted against his marijuana bills have had a change of heart when someone close to them got sick, he said.

When it comes time for deliveries, Peake is vigilant, making sure everyone he works with is registered with the state and enrolled in the medical cannabis program so they can legally handle the product.

Though Peake isn't a qualified patient, he obtained a medical cannabis card from the Georgia Department of Public Health, so that he can show it to constituents as he promotes the program, he said.

But a card is a card, enabling Peake to legally possess the cannabis at his office.

Shannon Cloud is one of the parents helping Peake move the oils to Atlanta. She initially got involved because daughter Alaina has Dravet syndrome - a rare, serious seizure disorder - and has benefited from cannabis.

Even though her daughter is off the drug because she's part of a clinical trial, Cloud remains one of the most active members of the informal distribution network.

She's passionate about this work, but frustrated that she's needed at all.

"It shouldn't be this way," she said. "You shouldn't be meeting at a gas station or a Target parking lot to get medicine to somebody. You should be going to the place where it is produced and tested to get it dispensed to you in a regulated manner, but this is what we're forced to do." 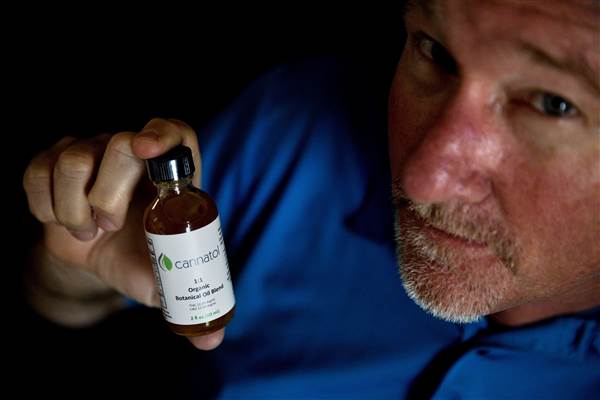