Temple Terrace, Florida - You could call it a cannabis controversy, one that is sparking heated conversation.

For the second year in a row, a massive,10-foot-long mechanical joint took center stage at a popular Bay-area 4th of July parade. According to one pro-pot group, the "World's Biggest Blunt" was back by popular demand in Temple Terrace. Organizers told 8 On Your Side that its members had every right to be there.

The National Organization for the Reform of Marijuana Laws, NORML, isn't backing down when it comes to spreading the pro-marijuana message. The giant joint was showcased in the parade with smoke billowing out of it.

"We filed all the paperwork, paid our fees. We are doing everything by the book. We want our message to be heard loud and clear," said float organizer Chris Cano. "We want to be taken seriously."

Cano is the executive director for the Central Florida chapter of NORML. He and his colleagues were thrilled to be part of the parade for a second year in a row. In fact, they tell us the response they got was phenomenal.

"This is all about education, not pushing drugs on anyone's kids. This is a legitimate medicine that we want to see doctors recommend to suffering patients," Cano said.

The longtime NORML member explained that his passion for the project comes from a personal place. "My father is suffering from Alzheimer's," he shared. "We want to help people and educate more Floridians."

But, the presence of pot is not sitting well with some parents on the parade route.

"This should not be around children," said Ellen Snelling, a mother of three and the chairman for the Hillsborough County Anti-Drug Alliance. "The biggest problem I have is the blunt. That shouldn't be at a family parade.

They have free speech and can spread their message, but that blunt shouldn't be there," she said.

As a matter of fact, when the Temple Terrace resident heard that NORML would once again be a part of the local parade, she was shocked. "To have that at a parade that is mainly families, and especially my children all the way to teenagers, it didn't seem like the best venue," Snelling added.

Once again, as she did last year, Snelling made calls to the Temple Terrace Chamber of Commerce, protesting the presence of the big blunt.

In the end, Lady Liberty won this round. The chamber cites free speech as the basis for allowing the pro-pot group into the parade float lineup. Cano countered, "What we're talking about here is saving lives. Why don't they get that?"

Cano says NORML has had its sights set on an even bigger venue — Gasparilla. But, the $12,000 price tag, he maintains, is prohibiting the creation of a float. "We think that money would be better spent in other ways to help our members. We are working to spread our message on amendment two. It would change lives," he commented. "And, that's what we are here to do." 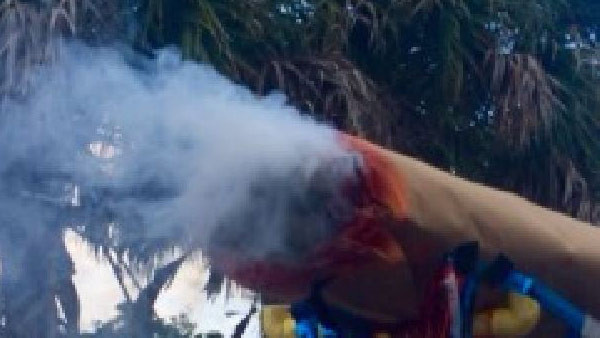