A bill to reject the Department of Public Health's latest draft of the rules governing the long-awaited medical marijuana program was met with fervent support from some community members and a local grassroots group Thursday.

In the past few weeks, proponents and local stakeholders of the program have raised several issues, including the proposed $25,000 cost to operate a dispensary, the inability to cultivate marijuana at home and restrictive access for patients.

Based on those concerns and the recommendation of the Committee on Health Chairman Sen. Dennis Rodriguez Jr., Sen. Tina Muna Barnes, the bill's author, wants the proposed rules scrapped.

"I will stress that we have to reject these rules in order to move forward with strengthening the provisions in our medical cannabis program," said Barnes, who co-wrote the voter-approved Joaquin "KC" Concepcion II Compassionate Cannabis Use Act.

"Yes, it was a tremendous amount of work and effort that went into this process," Barnes added, acknowledging the Public Health department's efforts. "However, as we began the review of the proposed rules and regulations, we realized that key pieces of legislation should be put in place."

Barnes said the government needs to construct a medical marijuana program that suits the needs of the patients on island — a point that the local advocacy group Women Grow Guam made during previous public hearings on the proposed rules.

"Please don't assume that Guam is not innovative or daring enough or bold enough to create a superior and successful policy or program that is suited to us, the constituents of Guam, our home," said Women Grow Guam member Leilani Peredo on Thursday.

Women Grow Guam President Andrea Pellacani told lawmakers they should develop a policy that protects patients and their privacy as well as providing adequate access to the drug.

Pellacani said the group wants to eliminate the illicit marijuana market — a process that can be achieved with a well-intentioned medical marijuana system.

"I definitely agree with Sen. Barnes that the original rules and (regulations) are totally inappropriate for Guam," Lynn Flores told lawmakers during Thursday's hearing. "I was especially struck by how inappropriate the fees were and that it afforded no opportunity to people with less money in their pockets to participate in developing an economy that would allow them to participate in a growing program."

Public Health Director James Gillan has previously stated that the $25,000 cost to operate was set because the federal government still classifies marijuana as a Schedule I substance, which means its considered a drug with a high potential for abuse and has no medical use.

"We must keep in mind that this currently Schedule I drug requires strict and responsible regulation," Gillan recently wrote to the Legislature. "If we truly want to make the cannabis available at the lowest cost, then we should offer it at considerable subsidy by the government of Guam."

In addition to Bill 345, Sen. Barnes introduced two other measures — Bills 343-33 and 344-33 — that would amend the original cannabis act. Bill 344 specifically allows qualified patients to grow up to six plants in their own home.

During Thursday's hearing, which was meant solely for the rules rejection bill, August Fest advised Barnes to amend the six-plants proposal to instead stipulate the amount of marijuana a person can grow based on square footage.

According to Fest, when growing marijuana plants, half come up as male and the other half grow up to be females, which contain the marijuana buds that are smoked. Fest suggested that a plot, ranging between 32 to 50 feet, should produce an adequate amount of home cultivated marijuana for a patient to use.

"Six plants, that's totally useless to a patient. Half of those could be males and you don't realize that until 70 days into it and then you'll only end up with three females to hold you off from seed to harvest," Fest said.

Sen. Rodriguez noted Thursday that lawmakers are up against the clock, with a deadline of early August to take action on the draft rules and regulations, otherwise they automatically take effect.

Bill 345 is likely to go before senators during legislative session in early August. Barnes' other two bills are scheduled for public hearings next Wednesday and Friday at 5 p.m. 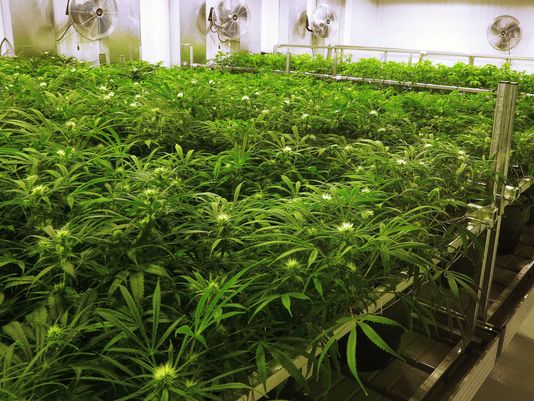