Global Hemp President Eric Pollitt's lobbying for an industrial hemp research bill has finally paid off as the Illinois Senate passed HB 5085 on Monday, May 19th, with all voting in favor of the bill. Two prior Industrial Hemp bills, one in 1999 and another in 2000, passed the House and Senate, yet were vetoed by Governor Ryan, who stated a lack of private funding for research led to his veto of the second bill. Mr. Pollitt worked with State Representative David Leitch (R-Peoria, IL) to create the bill, and HB 5085 acts as a research bill, one that will allow the industry to move forward.

"The late 1990s saw numerous hemp legislation passed, yet Hawaii was the only state able to follow through with research, headed by David West, PhD. During this period, researchers had to first obtain permits from the DEA before proceeding as hemp had yet to be distinguished from marijuana in terms of cultivation. Although raw and finished hemp materials, such as those sold through the Global Hemp Store, remain exempt from the Controlled Substance Act, cultivating hemp remained an issue. Viable seed is the only hemp product regulated by the Controlled Substance Act, which explains why Canada are able to export hemp seed products into America," Eric Pollitt declares.

Retail sales of hemp products exceed $581 million last year, according to the Hemp Industries Association, yet the raw materials come from other countries. HB 5085, drafted by Mr. Pollitt and Representative Leitch, began as a licensing program bill, one allowing farmers to grow industrial hemp, using the same strict parameters found in the European Union and Canada. The Illinois Department of Agriculture objected to this bill as it lacked funding, which was estimated at $500,000 for program oversight. This led to the bill being amended to become a research bill, which passed the House on April 10.

"Thanks to the passage of the federal 2014 Farm Bill, the differences between marijuana and industrial hemp have been established at the federal level. States with industrial hemp legislation can now perform research at the state department of agriculture or universities without a DEA permit, yet neither the Illinois Bill or the Farm Bill allows farmers to grow hemp," Pollitt continues.

The hemp provision in the Farm Bill has been challenged by the DEA in Kentucky, but with the support of the Secretary of Agriculture Tom Vilsack and Attorney General Eric Holder this will be resolved soon. Global Hemp plans to take advantage of this bill by initiating research in conjunction with state universities. Furthermore, the company has long-term plans to build a hemp processing plant and has numerous other projects in the works. As Pollitt explains, "A significant opportunity for growth remains, such as in the automotive composite industry, and the time has come to take advantage of it. With the passage of this bill, Global Hemp will now be able to do so." 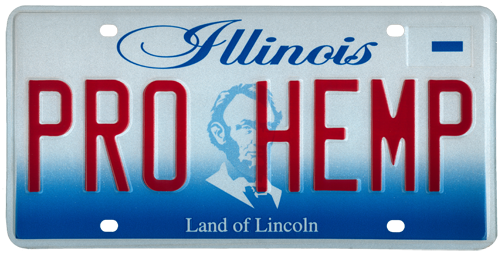