Inside The Marijuana Showdown At The Canadian Border

It was 2013, and Goldstein, a 30-year-old Canadian from the Vancouver area, was on her way to a Dave Matthews concert in Washington state, passing through the Peace Arch border crossing between the United States and Canada. She'd done this countless times before and had never been asked about her narcotics history. The inquiry seemed especially odd considering the setting: With its picnic tables and grassy fields, the Peace Arch port of entry looks more like a park than a high-security border crossing.

So she told the truth: She used marijuana about once a month. She was, after all, traveling into Washington State, whose voters had legalized marijuana the year before. Her boyfriend at the time had recently been asked the same question at the border, and when he'd admitted to smoking pot, agents had thanked him for being honest and let him through. But the guards had a different reaction to Goldstein's response. The detained and interrogated her for six hours, then told her she'd been deemed inadmissible to the United States, a status that would likely stay with her for the rest of her life. "I was being treated like a criminal when I didn't do anything wrong and was just being honest," she says.

It wasn't a mistake. According to a statement from Customs and Border Protection spokesman Jaime Ruiz, "A violation, conspiracy to violate or simply an attempt to violate any U.S. State, federal or any foreign government controlled substance law renders a foreign national inadmissible to the United States." That means, as per immigration law, if a foreigner tells border agents that he or she has consumed or plans to consume marijuana, even in jurisdictions where it's legal, the result could be banishment from the country for life. While the law has been on the books for years, the little-known rule has become a growing problem as states like Washington, Oregon and Colorado have launched recreational marijuana markets and folks become less reluctant to admit to using cannabis. Matters will surely become even thornier over the next year, as two more border states, California and Maine, launch recreational cannabis programs and, more pressingly, Canada moves towards legalizing marijuana nationwide.

That means there could soon be a lot more Canadians and other foreigners who find themselves barred from the United States for admitting to something they figure is perfectly legit. And once that happens, the only way for them back in is by applying for an inadmissibility waiver from the U.S. government. To do that, Goldstein and many of her countrymen are turning to one individual in particular: Len Goldstein, a small-town immigration lawyer in Blaine, Washington, who's become the go-to guy for Canadians who unexpectedly find themselves turned into international pot pariahs.

After his clients receive their first waiver following the four- to six-month application processing time, they need to immediately start the process over again – and then again and again for the rest of their lives.

"For me, it's definitely a booming business," says Saunders. The Canadian-born attorney, who attended Pepperdine School of Law in California and has dual citizenship, had no intention of becoming an expert in marijuana and immigration law. He simply saw an opportunity to set up a law firm specializing in immigration issues in Blaine, the nearest border town to the Peace Arch port of entry, the third busiest crossing between Canada and the United States and the busiest on the West Coast.

But business started to change after Washington began opening recreational marijuana shops in 2014. Blaine has always catered to Canadian consumers, since gas and groceries are cheaper in the States. Now it began drawing cannabis shoppers from north of the border, too. "I wouldn't be able to survive here if I didn't have international travelers," says Jacob Lamont, owner of Evergreen Cannabis, a marijuana shop in Blaine. During the spring, summer and fall, Lamont figures 70 percent of his business comes from folks coming through the Peace Arch crossing, which he can see from his parking lot.

But with those marijuana shoppers came border problems. Saunders began receiving more and more phone calls from Canadians who'd told border guards they'd tried marijuana or were planning to in Washington and had been deemed inadmissible. "It used to be one or two cases like that a year," he says. "Now I am seeing one or two cases a week."

Those cases involve Saunders' clients completing an extensive waiver application, undergoing a criminal-background check, presenting proof of employment, providing two character reference letters, and penning a letter of remorse. Then there's the $585 filing charge, plus Saunders' legal fees. The resulting waivers are only good for one to five years; Saunders says first-time applicants deemed inadmissible for marijuana-related activities always begin with a one-year waiver. That means after his clients receive their first waiver following the four- to six-month application processing time, they need to immediately start the process over again – and then again and again for the rest of their lives.

"I tell my clients, this is a lifetime relationship with me," says Saunders. Not everyone can handle that process. Saunders has seen careers implode and relationships collapse over someone being deemed inadmissible to the country for marijuana and not being able to jump through all the endless hoops to get back in.

Such cases aren't the only way clashes between marijuana reforms and immigration law are wreaking havoc on people's lives, say immigration lawyers. Cannabis businesses can't attract foreign financiers who'd need immigrant investor visas or sponsor employment-based visas for qualified candidates from other countries because they deal in a federally unlawful substance. U.S. citizens in the marijuana industry can't sponsor visas for foreign-born spouses, since their partners would be considered complicit in illicit drug activity. And immigrants working in dispensaries are being denied green cards because of their jobs.

Cannabis-based immigration crackdowns are nothing new. According to a 2015 Human Rights Watch report, between 2007 and 2012, more than 50,000 non-citizens were deported after being convicted of selling or possessing marijuana. But experts say the situation could be exacerbated by the Trump administration's hardline stance on cannabis, including Homeland Security chief John Kelly's recent statements that marijuana is a "potentially dangerous gateway drug" that will be used as a basis for "targeted operations against illegal aliens."

"Statements by the administration make us concerned that there will be really severe immigration consequences for people who use marijuana, even in jurisdictions where it's legal," says Human Rights Watch senior researcher Grace Meng. "We are all trying to track the impact of what these new policies are, but we might not know for a year or more."

The administration's position on marijuana might already be having an impact on immigrants. A woman in Colorado says she and her family moved to the state about a year ago so she could use medical marijuana for a serious heart condition. Recently, her husband, a foreign national who's had his green card for 15 years, was planning on applying for citizenship. But then a friend working for the federal government warned him that the naturalization process had just been changed to scrutinize applicants' experience with cannabis. "He said if my husband's records showed any mention of relocating for [marijuana] access for me, that would be enough for him to be deported, as it shows him being supportive of usage," says the woman, who asked to remain anonymous to protect her family.

In Blaine, Saunders says he's starting to see indications of toughening policies, too. Last month, on 4/20 of all days, he received his first ever denial of a waiver for a marijuana-related inadmissibility decision. And while immigration officials can send waiver applicants to an authorized physician to determine if they're a health risk, they had only decided to do so once over the past year for all of his marijuana-related clients. That changed last month: Three of his clients were told they'd need a medical exam to determine whether their cannabis use was a health threat.

No one knows how the situation will change if Canada ends marijuana prohibition in 2018. "If they legalize, I don't think they can find someone using marijuana under a federal government where it's legal inadmissible," says Scott Railton, a Bellingham, Washington-based immigration lawyer who's an expert in marijuana-related immigration issues. "But my guess is immigration agencies will be slow to give clear guidelines on that, and I still think there will be some arbitrary exercise of authority."

The new law also wouldn't help Canadians who let slip to border guards they're heading to Washington State to do their cannabis shopping, says Saunders. "I am sure marijuana is going to cost less here," he says. "Because of taxes in Canada, everything is more expensive." Nor is nationwide legalization – in Canada or eventually in the United States – likely to help foreigners who've already been deemed inadmissible for past cannabis incidents. "Officials I've talked to say these people would still be inadmissible because at the time they admitted to smoking marijuana, it was still a controlled substance," says Saunders.

The best option for foreigners, says Saunders, is to avoid admitting to marijuana use at the border in the first place. "I can't tell people to lie to a border agent," says Saunders. "But I can tell people they are under no obligation to answer that question." If someone refuses to answer questions about marijuana, the only thing agents can do is deny entry to the country on that given day.

But even with warnings like this, Saunders figures more and more Canadians are going to assume it's okay to be open about marijuana at the border, which means he's going to be getting more and more calls about it. "I want a booming green card business, I want a booming business of individuals who want to become nationalized citizens and vote in federal elections," he says. "I want my workers permits to boom, so more foreigners can come here and work, like I did." 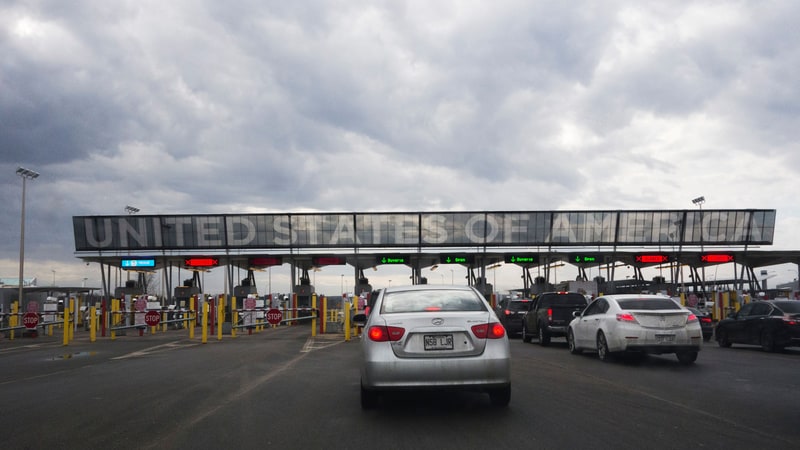