MD: Medical Marijuana Dispensary In Silver Spring Invites Public In For A Look

Bethesda resident Denise Dougherty said entering a medical marijuana dispensary in California felt a little "like you're sneaking into a speakeasy."

"I could hardly find a door," said the 70-year-old woman, who suffers from chronic pain.

According to Dougherty, the vibe was decidedly different Tuesday when she walked into the sunny lobby of RISE Silver Spring, a new medical marijuana outlet at 7900 Fenton St.

The business invited the media, prospective patients and curious members of the public in for a ribbon cutting and a tour of the building, which was once home to Banner Glass. Andy Grossman, a partner in the company that owns RISE, said the business opened its doors to dispel stereotypes and concerns about dispensaries.

"This is not a pot shop. This is a medical facility," said Grossman of Green Thumb Industries.

"It's warm and welcoming, and it will let you feel comfortable bringing anyone here," he said.

Monroe, who played seven seasons with the Ravens and the Jacksonville Jaguars, said that at one time, he relied on heavy-duty painkillers to cope with of the aftermath of surgeries and football injuries. Since he began regularly using medical cannabis, he's been able to stop taking the dangerous medication, he said.

In recent years, he's "been on a warpath for helping people," said Monroe.

However, the state's medical marijuana program has been slow to get off the ground since enabling legislation passed in 2014. Now, RISE and other Maryland dispensaries, including one near the city of Rockville, are waiting for the release of the first batch of medical cannabis products.

Tuesday's event drew dozens of people, some of whom filled out registration forms so they could buy medical cannabis once it's available. Grossman said the store is ready to open after the first product shipment arrives, possibly within the next week.

GTI is licensed to sell medical marijuana in Illinois, Nevada, Massachusetts and Pennsylvania. The Silver Spring location is the company's first Maryland dispensary, he said.

Ten to 15 staff members will work full-time at the dispensary.

Grossman said the business has solicited input from the Montgomery County police on securing the building and has installed an alarm system and indoor and outdoor cameras. A locked door stands between the lobby and the area stocked with medical marijuana. Customers are admitted into the back by a staff member.

The store will offer an assortment of oils, concentrates, pills, transdermal patches, tinctures and flowers, he added.

After her visit Tuesday, Dougherty said she's considering medical marijuana as a potential treatment for some of her pain.

"I'm taking opioids for pain, and I would like not to do that," she said. 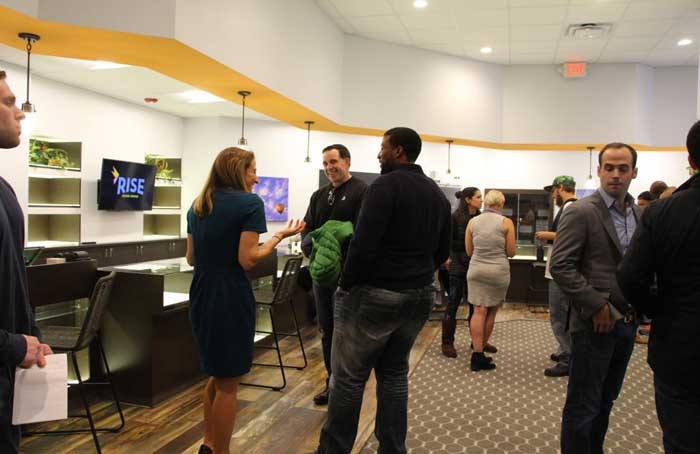