Missouri - The pediatric intensive care unit at a nearby children's hospital has become like a second home for Lenexa mom Christine Bay and her 2-year-old daughter, Autumn. "We're on a first-name basis with everyone at the Children's Mercy PIC-U," Bay said this week. Bay said her daughter has sodium channelopathy, a genetic disorder that causes her to have seizures that have thus far defied all traditional medical treatments. Bay is adding her voice to a growing chorus of families calling for state governments to allow them to try medicinal marijuana in the form of an oil derived from cannabis that some seizure sufferers say is a godsend.

"I want them to stop interfering with the physician-patient relationship," Bay said. "If a physician feels this should be an option, it should not be up to politicians to tell us whether we can take a medication." The oil, like all marijuana products, is currently illegal in Kansas. But Bay said she has talked to physicians in Colorado – one of the states that have legalized medical marijuana – who are willing to write her daughter a prescription for the cannabis oil today.

A Kansas City television station reported that prohibitions in Missouri and Kansas spurred Kansas City mother Holli Brown to move to Colorado Springs last year, where she said her 10-year-old daughter's seizures are being successfully treated with the cannabis extract. Bay said that isn't an option for her family. They own a home and a business in the Kansas City area, they have four other children in school and they have a team at Children's Mercy that understands Autumn's complex case. "We are not in the position to be able to relocate," Bay said.

Bay said the fear of legal action keeps her from transporting the substance from Colorado, and even if she could import it, the fear of child welfare action would deter her from administering it in states in which it is prohibited. Natalie Judd, a spokeswoman for the American Epilepsy Society, said Bay's situation isn't unique, given the patchwork of state marijuana laws.

"This has been a story unfolding in many places around the country," Judd said. Judd referred to the epilepsy society's official position paper on medicinal marijuana as a seizure treatment, which encourages more research. The paper notes that one-third of the 3 million Americans with epilepsy have "ongoing, treatment-resistant seizures" and anecdotes about successful treatment through cannabidiol "give reason for hope."

But the paper stresses that anecdotes can't take the place of controlled medical studies, of which there haven't been enough, the society says. "At present, the epilepsy community does not know if marijuana is a safe and effective treatment nor do we know the long-term effects that marijuana will have on learning, memory and behavior, especially in infants and young children," the society's paper states. "This knowledge-gap is of particular concern because both clinical data in adolescents and adults and laboratory data in animals demonstrate that there are potential negative effects of marijuana on these critical brain functions."

The society's paper urges that the federal Drug Enforcement Agency review its listing of marijuana as a Schedule 1 controlled substance, which has restricted some research. Meanwhile, states are moving on their own to decriminalize prescription marijuana. Minnesota passed a bill allowing for limited use of cannabis oil only this year, bringing the number of states with some legal medical marijuana to 22, plus Washington, D.C. The Missouri Legislature passed a more limited version this year that allows for cannabis oil with small amounts of THC for epilepsy patients for whom three other treatments have failed to quell their seizures. As of Friday, Gov. Jay Nixon had yet to sign the bill into law. The Kansas Legislature had hearings on medical marijuana in 2012, when former Rep. Brenda Landwehr, R-Wichita, was chairwoman of the House Health and Human Services Committee.

It didn't make it out of Landwehr's committee, and since then, other committee chairs haven't brought the issue up for debate, though advocates like Sen. David Haley, D-Kansas City, introduce medical marijuana bills annually. Haley said recently he believes attitudes toward marijuana are changing, even in conservative states, and the evidence lies in the number of states to legalize. "We'll see what the (Kansas) Senate does," Haley said. "But I certainly share with compassion the many stories I've heard from families having to make key health decisions based on an unwarranted stigma that I predict will be fully resolved within a decade." Meanwhile, Autumn's condition consumes Bay's life, keeping her from work and socializing. She watches and hopes that Autumn won't have another hour-long seizure that will land her back in the Children's Mercy PIC-U, on a breathing tube. "I can't take my eyes off her," Bay said. "She could have a seizure at any time." 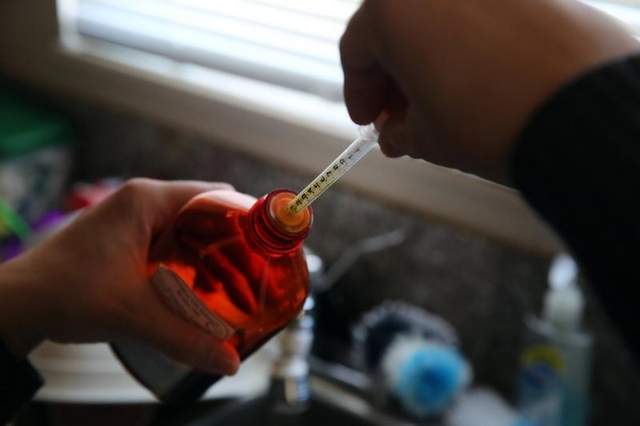