Philippines Explains Drug War To UN: Rights For Most but Not All

Addressing the mounting criticisms of the war on drugs, the Philippine delegation in Geneva fell short of recognizing the universal characteristic of human rights as it told a United Nations assembly that the Duterte administration's campaign is to protect the rights of "majority" of Filipinos.

Menardo Guevarra, a deputy executive secretary at the Office of the President who led the delegation, spoke before the UN Human Rights Council on Thursday during the adoption of the Universal Periodic Review Working Group report on the Philippines.

"We note that a number of our esteemed colleagues in this body have raised concerns about the extent of the direct and indirect effects of this campaign," Guevarra said.

"To the best of our ability, we tried to explain the underlying reasons for this campaign, that is to protect the human rights of the majority of our people," he added, ostensibly failing to meet the definition of application of human rights.

The drug war, which has led to the killing of thousands of mostly poor male drug "personalities" since it was launched last year, was a main issue of concern among the 95 UN member-states in the Swiss capital that took the floor at the session on the Philippines on Monday.

While Guevarra assured the council that the Philippines upholds the periodic review, he said most Filipinos will potentially suffer from the "dire consequences of an unmitigated abuse of illegal drugs." The statement is despite the unalarming drug prevalence rate in the Philippines by global measures.

The Universal Declaration of Human Rights, to which the Philippines is a party to, recognizes "the inherent dignity and of the equal and inalienable rights of all members of the human family" as the "foundation of freedom, justice and peace in the world."

The declaration does not exempt anyone, such as a minority of a population.

Sought for comment, the Commission on Human Rights said "universality and non-discrimination" are basic characteristics of human rights.

Prior to Guevarra's statement on Thursday, Sen. Alan Peter Cayetano, another head of the delegation, was also said to have applied a restrictive definition of "extrajudicial killings" in defending the anti-drug measures before the UN body on Monday. 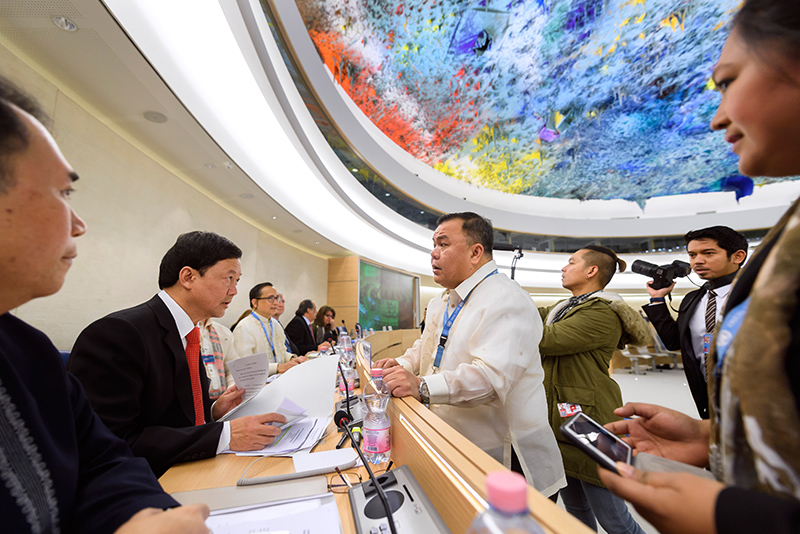