I saw a PVC CFL fixture in someones grow journal that inspired me to build my own, and figured i'd share some pics.

I ziptied a horizontal reflector I have for MH or HPS bulbs around it and seems to do the trick reflecting light from the top of the CFLs back:

I raised it a bit higher for the pics in the cab, usually the lights are an inch from the main tops, and I just pull the lights down to focus rigth on a main top. 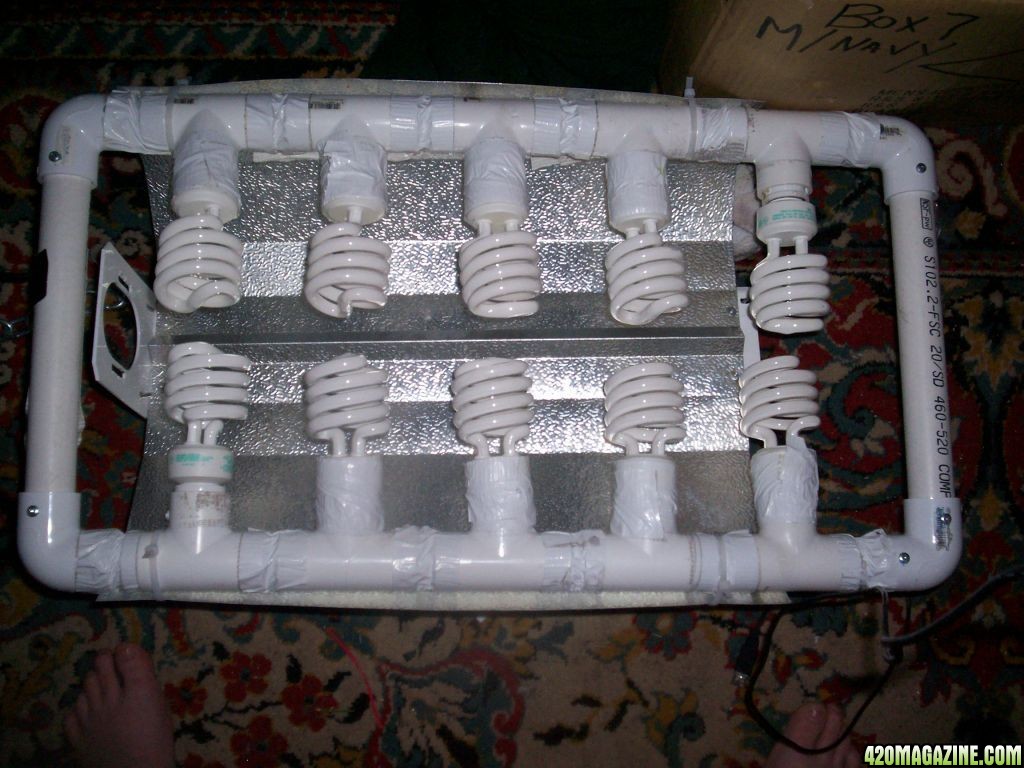 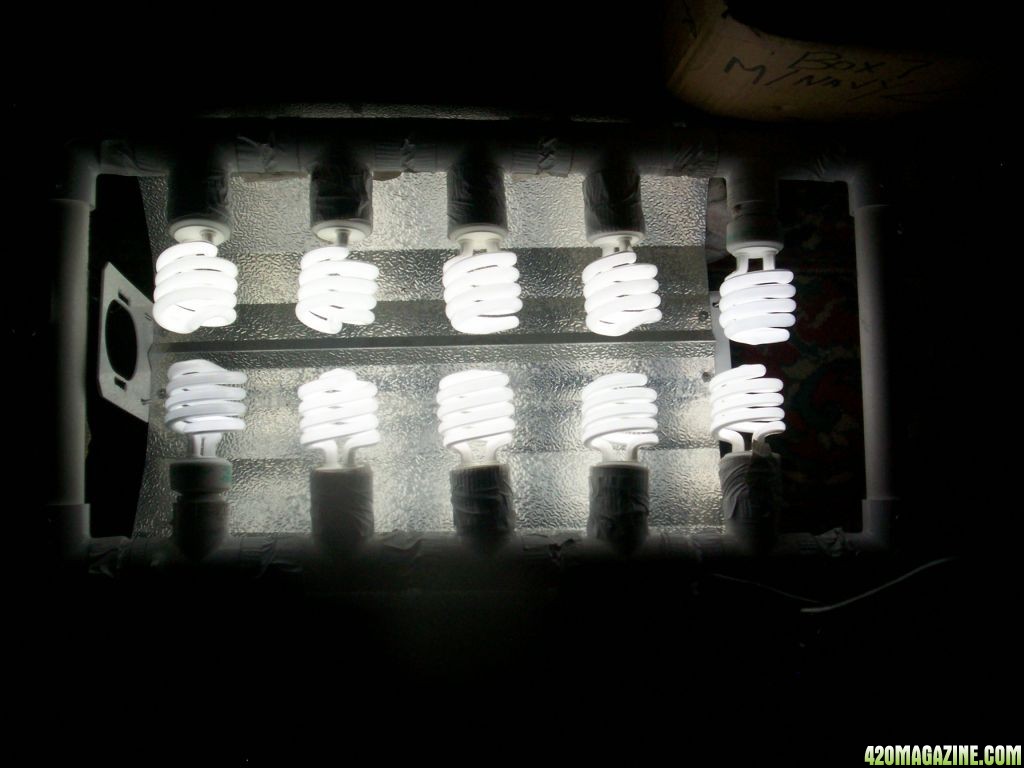 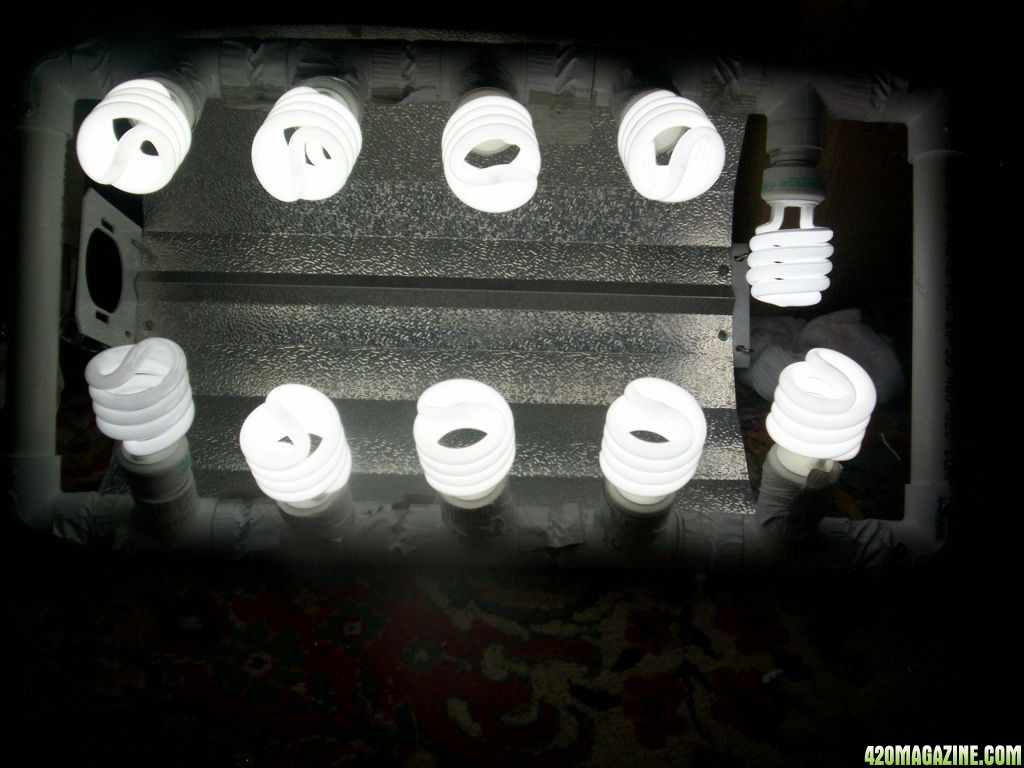 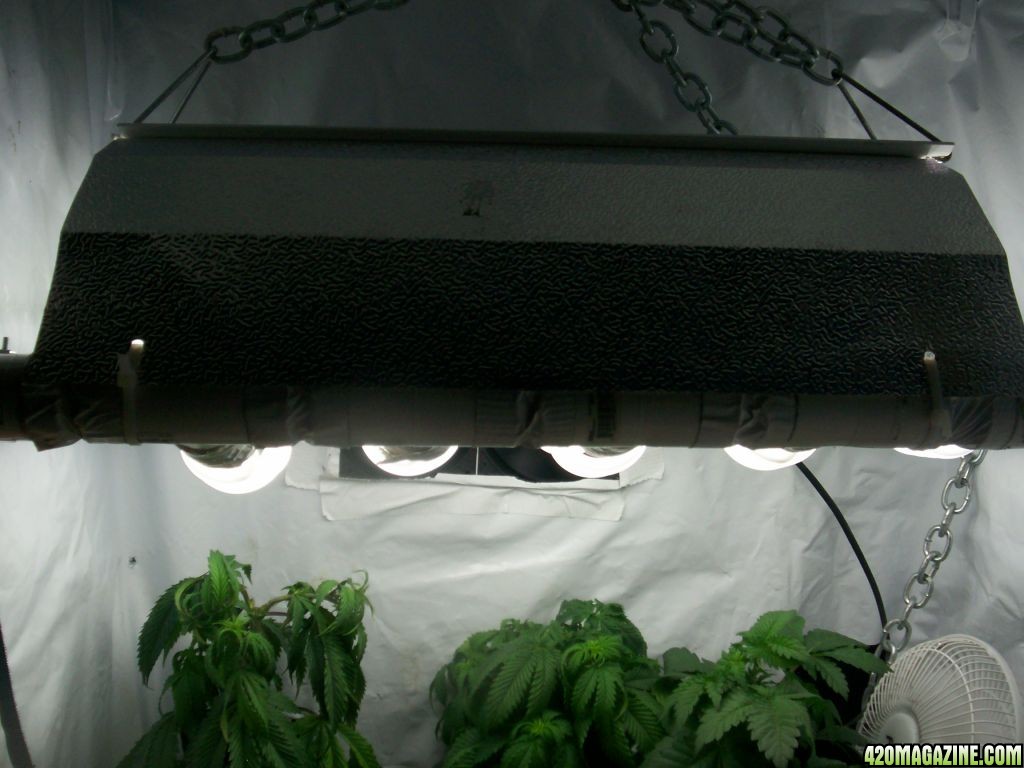 In Action Adjusted for each plant 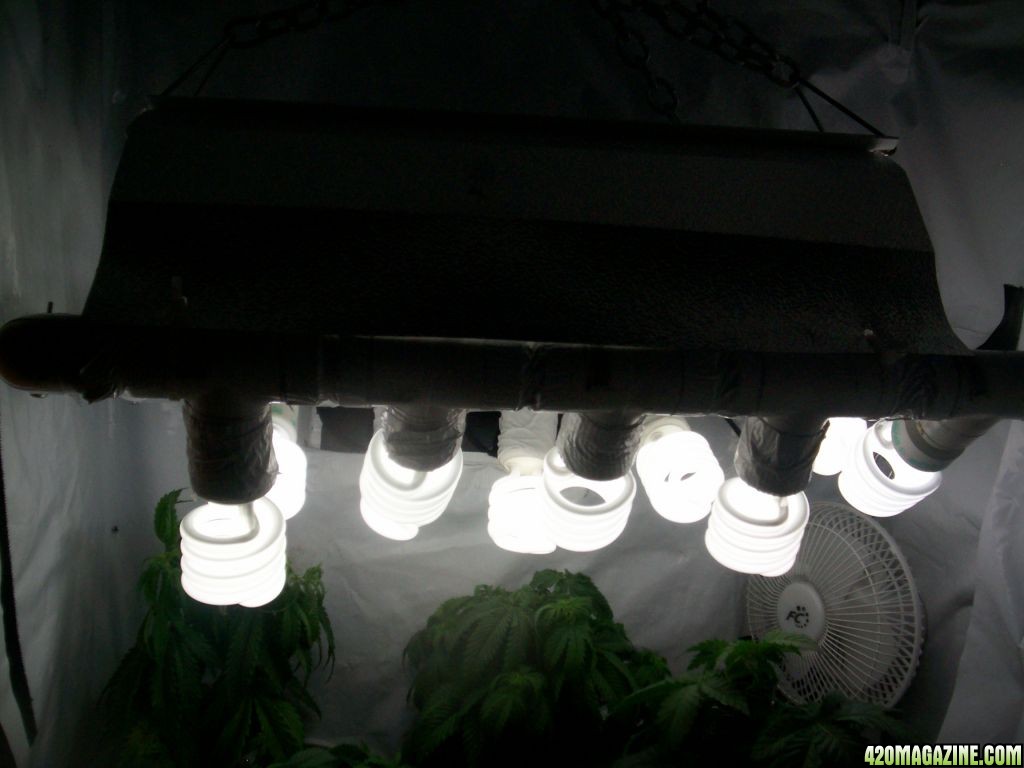 The plants should get far more of the bulbs' illumination with the next-to-last picture in your post than with the last picture. Only real use for vertical bulbs is when they are placed within the canopy instead of above it. Other than that, it looks like a nice use of materials at hand.
Respectfully,
Tortured Soul

The dinosaurs became extinct because they didn't have a space program. -Larry Niven
H

I moved the hood way above my plants to take these pics, these pics are about the fixture not my plants. I pulled the lights down in the pics to show the versatility of having them horizontal or anywhere in between to vertical at my discretion, they don't typically look that altered in the cab, just for pic purposes

Typically the hood is VERY LOW in my cab, and the bulbs are almost entirely horizontal.

I just like the versatility that I can pull them down as I please, and it has been helpful to do so in some cases to do exactly what you said, placing the light in the canopy, or between two plants which have several new side growth nodes shooting up from the LSTing i've done to them.

Also some plants are taller then others cuz there are several strains in there, my indica is like 6" tall and on its 7th node (so we're talking a growth of the main stem of only 1/4-1/2" between nodes), and so i've had to adjust the lamp's position accordingly, whereas the sativa's I have require agressive LSTing to keep them down !

Also, after topping the sativa's i've found it very helpful to move one of the lights down closer to where I topped so those tiny tiny growth shoots get max light, and as a result they bounce back way faster after topping, that is to say the two 'new' main branches grow out a lot faster then if the light wasn't pulled down right near them

I built this thing in the first place for the sole reason of using horizontal CFL lighting over vertical, cuz I saw such a HUGE waste in these grows I see with vertical lights hanging down.

I might do a scrog in my next grow, in which case the lights will remain permanently horizontal, its just as of now I have all these different plants at different ages, different heights, and different regions of aggressive growth, so I like tailoring/dedicating a given lamp to a given objective. I also know that vertical or not they are right below a reflective hood, so the light will bounce back on my plants anyways.

Thanks for your advice though, just know these are just pics I took to show off the lights, not the plants

PS: I was logged onto my brothers account when I posted those pics last night, so ... I am MDMA4LIFE

Looks good Brother- Just try to keep the lights about 2" above plants max.-I built a 12-Pack cfl using plywood,making an air plenum in the top of the light to help keep the heat down-put a 6" duct tap-connected to my 400 cfm inline fan.CFL's work great just have to experiment a little-
"One Man Gathers What Another Man Spills"
H

Its never over 1", have done so on purpose, cuz my plants LOVE IT.

They grow maniacally towards that light, and there's only an internode distance of like 1/4", even on my 'tallest' sativa plant.

Only problem i've run into is I just switched to 12/12 well 3 days ago now, and they are stretching like mad already.

Got that under control with LST and supercropping, but the prob is that for eg. I went to work for 9 hours and some of the shoots grew over 2 inches in 9 hours !!! Grew right into the lights and kept on going lol, these plants just can't get enough EM quanta !

I know CFLs aren't hot, but when the plant is directly touching one, it gets burned

So now I 'TRY" and raise the light a few extra inches just before the lights go off (and of course lower them again when the lights go on). but I can't be around 24/7, thats why i'm doing this, lights go on 2 hours after my shifts at work begin. So I come home on every break and my coworkers are like where are you going "O just to get some food [and take care of my plants

Anyways, only into day 3 of flower so nothing really to speak of yet, but hopefully there's some pistils soon, i'd have thought there would be aggressive flower auxin metabolic flux since I had them on 24/0 before and now they spend half their day in this new thing called darkness haha

I had to open the cab in the dark yesterday to raise the light cuz I was paranois they might burn in the 2 hours of work I wasn't there. Only open for about 15 seconds, and I blocked as much as I could, but I still interrupted the dark cycle, which pisses me off for doing


Last one I shot with my non-contact IR thermometer read 154.2Â°F. Think it was a 42-watt one or thereabouts. Might have been because it had quite a few hours on it, but ten of those - with their attached ballasts - in a box produce more gross BTUs than a 400-watt HPS (without an attached ballast).

Individually, a CFL produces relatively little heat. But it's still a factor that should be taken into account. They're not really at the top of the efficiency pile.

) though and have shown it to others.
Respectfully,
Tortured Soul

The dinosaurs became extinct because they didn't have a space program. -Larry Niven
H

TorturedSoul said:
Last one I shot with my non-contact IR thermometer read 154.2Â°F. Think it was a 42-watt one or thereabouts. Might have been because it had quite a few hours on it, but ten of those - with their attached ballasts - in a box produce more gross BTUs than a 400-watt HPS (without an attached ballast).

Individually, a CFL produces relatively little heat. But it's still a factor that should be taken into account. They're not really at the top of the efficiency pile.

) though and have shown it to others.
Click to expand...


O yeah, heat was a significant problem in the first week or two of growth.

I have just since gotten it under control and in fact with the fan I have directly on the lights, I could grasp a lamp and it feels COOL
R

How did u get power to all the bulbs?
hempy bucket lemon kush
P

I wired mine up in parallel circuit.
P 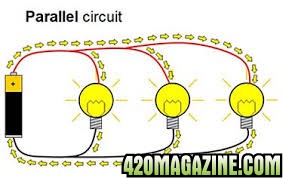 Yeah, it's pretty simple. I just bought 25 feet of wire, cut it into usable lengths, and wired up each socket. Just keep going from positive to positive till it dead ends at last socket, and repeat with negative. I can take a pic of the wiring if you need it
R

Alrighty, I'll run out and grab a pic. Be back in a minute
P 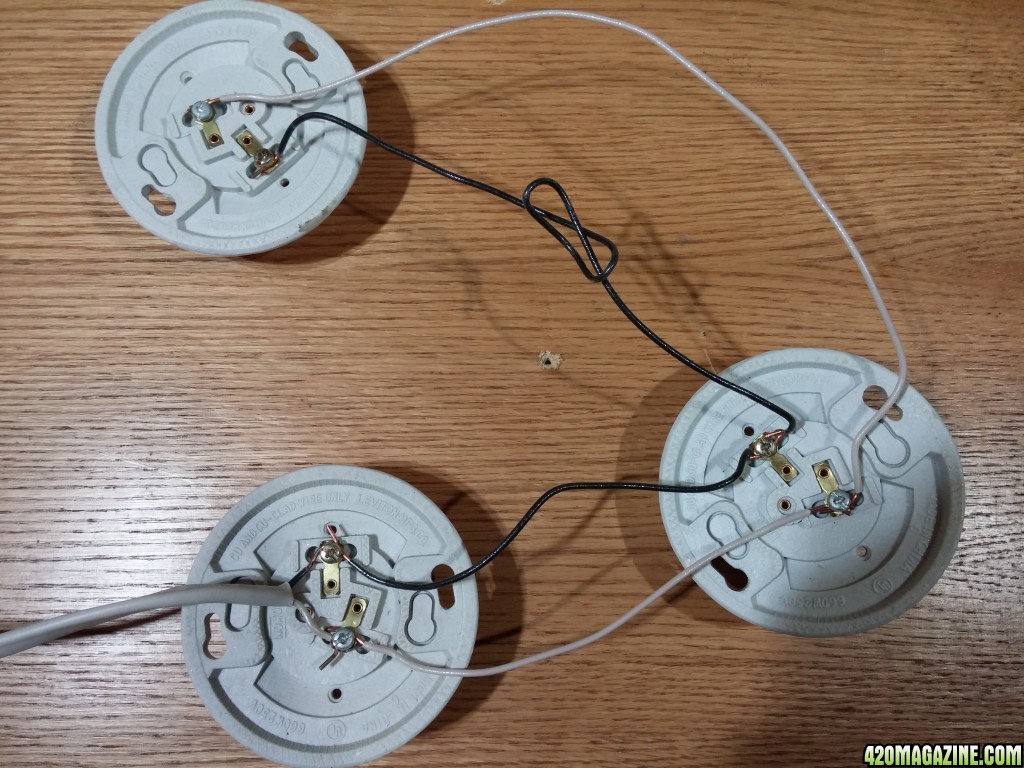 I had to look at it in pictures to get it right, so no worries. Can't wait to see what you do with the setup. I'll be getting my CFL bulbs back up in a week or so for next set of veg plants. Excited!
R