A coalition seeking to legalize recreational marijuana in Michigan got the green light Thursday to circulate petitions and plans to begin collecting signatures immediately in hopes of making the 2018 ballot, a spokesman said.

The Board of State Canvassers unanimously approved the form of petitions submitted by the Coalition to Regulate Marijuana Like Alcohol despite opposition from a mysterious new group that called the language "misleading."

Petitioners will have to collect at least 252,523 valid voter signatures within a 180-day window to qualify for the ballot.

"We also have volunteers who are here today who are ready to go. We will be on the streets immediately, making sure we're out there especially at the Memorial Day events."

The proposal would allow adults over the age of 21 to possess and use marijuana. It would tax sales and create a state system to license and regulate growers, processors, testing facilities, distributors and retailers.

Gordon urged the bipartisan board to reject the petition, arguing the proposal would not actually regulate marijuana like alcohol. He noted the initiative would allow individuals to grow up to 12 plants at home, similar to Michigan's current medical marijuana law.

"They don't have to be licensed and they are not taxed," he said of the potential home growers. "There's not regulation at all on that."

The four canvassers approved the petition for circulation, saying it complied with the state's technical requirements. They do not have statutory authority to weigh in on the substance of the petitions.

Lansing political consultant Chris DeWitt is a spokesman for the new opposition group, but he declined to provide any other details about who is involved. He said additional information will be revealed in coming weeks.

Political consultant Steven Linder of the Sterling Corp. accompanied DeWitt at the board meeting but said he has no formal role with the group.

The anti-marijuana group is "committed to making certain every citizen, especially our kids, are protected from the unregulated proliferation of pot being made available across Michigan," according to a press release.

"If this flawed effort passes as proposed there will be no stopping pot from infiltrating all aspects of our society, including schools, neighborhoods and places of work."

The proposal would regulate commercial marijuana production and sales. Smoking would not be allowed on public sidewalks. Local communities could decide whether they want to allow marijuana businesses.

Retail sales would be taxed at 10 percent, plus sales tax, with the new revenue going to K-12 schools, road repairs and participating cities and counties.

"We are clearly the most tightly controlled marijuana legalization initiative that has come to the state of Michigan," Hovey said. "To argue that we're misleading in any way I find to be laughable."

The board meeting took place at the same time as an addiction recovery rally outside the state Capitol, and some attendees raised concerns after the petition approval.

"I'm just concerned as a parent and as a professional that works in the field," said Mike Tobias, who works with Michigan Alcohol Policy Promoting Health and Safety.

"Marijuana is very potent, it's a little different from when I was growing up as far as the potency, so I'm not sure we know all the ramifications, but then there's more and more research raising concerns about the health effects of marijuana."

The proposal was drafted with input from the Marijuana Policy Project, a national group that has played a role in winning campaigns in other states.

The coalition includes the American Civil Liberties Union of Michigan, the National Patients Rights Association and MI Legalize, an activist group that attempted its own petition drive in 2016 but fell short. 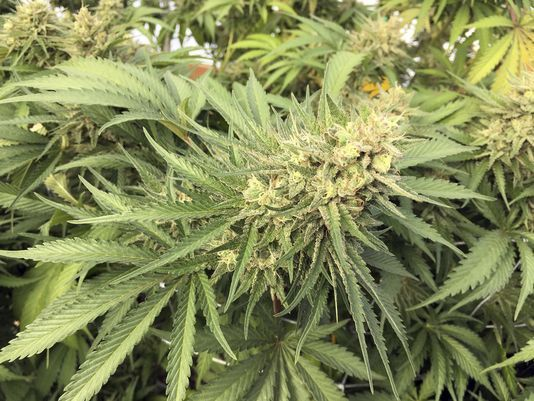