Pot Shots: The Long War Over Marijuana Legalization In Canada

By 1971, marijuana's scent hung over most of Canada. Some 1.5 million folks had taken at least one drag on a joint. Hundreds of thousands were regularly firing up, grooving to Three Dog Night and learning from the leaked Pentagon Papers that the U.S. administration had lied about the Vietnam War.

Convictions for simple pot possession exploded: from 431 in 1967 to 5,399 in 1970 and 8,389 in 1971. More than half were against otherwise law-abiding baby boomers under 21 who would now carry criminal records along with their university degrees.

In May 1972, a federal commission of inquiry into the non-medical use of drugs handed an audacious recommendation to the government of then-prime minister Pierre Trudeau, whose flower-child bride, Margaret, was smoking weed behind the backs of her RCMP bodyguards.

After two years of public hearings, including testimony from John Lennon and Yoko Ono, the Le Dain commission said laws against simple possession of marijuana and hashish should be abolished in the face of a blossoming social attitude among a growing minority of people that grass was relatively harmless. It stopped short of saying the stuff should be made legally available and consumed.

Part of the climate of acceptance was attributed to the expanding influence of rock radio and music such as Black Sabbath's 1971 stoner anthem "Sweet Leaf."

But it was the heavy-handed use of criminal law to suppress the youthful pursuit of a buzz that offended many people's sense of justice and threatened to erode the moral authority of the law, the commission said.

"The use of cannabis is a problem but so also is the present use of the criminal law to suppress it. It is clear that the law has had no serious effect on this issue. There can be no doubt that the law on the books is at extreme variance with the facts. It is simply not a feasible policy in the long run."

Forty-three years later, recognition of pot's reality has arrived. Prime Minister Justin Trudeau says his government will do what his father's would not by legitimizing simple possession of recreational marijuana and regulating its sale, like alcohol and tobacco.

There's no timeline on lifting the prohibition. Other Liberal justice issues — notably the implementation of physician-assisted suicide, the inquiry into murdered and missing indigenous women and girls, and criminal justice reforms — are more urgent priorities.

A November poll by Forum Research suggests 59 per cent of Canadians favour legalization and about one-third of the nation's adults — six to seven million — plan to indulge in the psychoactive pleasure once it's no longer a crime.

Federal Health Minister Jane Philpott says a task force will gather information about how marijuana could be sold; age limits; and police enforcement issues (trafficking will remain a crime). But she offered no timeline. In Ontario, Premier Kathleen Wynne suggests provincial liquor stores could start retailing government-certified — and taxed — ganja.

In the meantime, the 426-page Cannabis Report of the Le Dain commission, headed by Gerald Le Dain, then-dean of Osgoode Hall Law School, remains an insightful guide, even if some of its psychedelic language is dÃ©modÃ©. ("Cannabis" denotes both marijuana and hashish.)

The chief question back then was whether there was a well-founded social concern about cannabis's non-medical use, and if so, how that concern should express itself in social policy. The issue turned on the question of whether marijuana was harmful.

Le Dain and his four fellow commissioners concluded the developing brains of adolescents could be damaged by cannabis and singled that out as the most serious issue in the legalization debate.

"It seems completely unrealistic to assume that adolescents, beginning as early as the age of 12, can persistently resort to cannabis intoxication with its hallucinogenic effects without seriously interfering with development of the capacity to cope with reality that is an essential part of the process of maturation."

It recommended no one under 18 be allowed to legally possess marijuana, but acknowledged that making it available to adults would, like booze and cigarettes, have the effect of making it more available to minors. Adult use also would make it seem relatively harmless to kids.

Beyond that, however, the inquiry found no evidence to support 50 years of "reefer madness" sensationalism.

Emily Murphy, a police magistrate and juvenile court judge in Edmonton, and later leader of the Famous Five champions of the rights of Canadian women, had spearheaded an anti-narcotics campaign in the 1920s that would profoundly influence national drug policies, including the demonization of cannabis. Her 1922 book, Black Candle, warned of the menace of marijuana and quoted the chief of police of Los Angeles saying many users experienced utter insanity.

Some believe Murphy's fear-mongering led to marijuana being criminalized in 1923 without any apparent public debate, scientific basis or any real sense of social urgency. Over the years, stiffer penalties for opium, heroin and other heavy narcotics were automatically applied to cannabis. And its increasing illegality seemed to make it more dangerous.

Yet a Senate committee examining drug trafficking in 1955 reported no domestic marijuana problems beyond a few isolated seizures from foreigners and returning Canadian tourists.

No matter, the maximum sentence for trafficking and possession for the purpose of trafficking was doubled to 14 years. Then, in 1961, trafficking and possession for the purpose offences became liable to life imprisonment — just as the leading edge of the baby boom entered teenagehood. Simple possession, as an indictable offence, was punishable by up to seven years in prison. A summary conviction carried a maximum six months in jail and/or a $1,000 first-time fine and $2,000 for subsequent convictions. (The average annual Canadian wage then was about $5,700.)

Lawmakers had no inkling of the dilemma their legislation would cause in the late '60s by disproportionately targeting middle-class kids and young adults looking to get high. It took another eight years for the social and political consequences to waft up to Parliament Hill and, in 1969, spark the four-year Le Dain inquiry.

"The attempt to enforce the prohibition ... is bringing the criminal law to bear against thousands of young people with very serious consequences for their lives," Le Dain later declared.

The growing costs for police, prosecutors and the courts was another concern, as was the hit-and-miss prosecutorial assault on recreational dopers. The law, the commission revealed, was catching less than one per cent of a conservative estimate of the total number of users. "A law which can only be enforced in a haphazard and accidental manner is an unjust law," it proclaimed.

It recommended laws against trafficking and distribution be softened but kept on the books to restrict availability. And it called for what became a new law against the cultivation of marijuana for the purpose of trafficking.

Reaction to the report split along predictable lines: Church and social groups approved. Police, justice officials and many politicians did not.

British Columbia premier W.A.C. Bennett summed up The Establishment response: "I am opposed to the legalization of these drugs, period, double period, triple period." 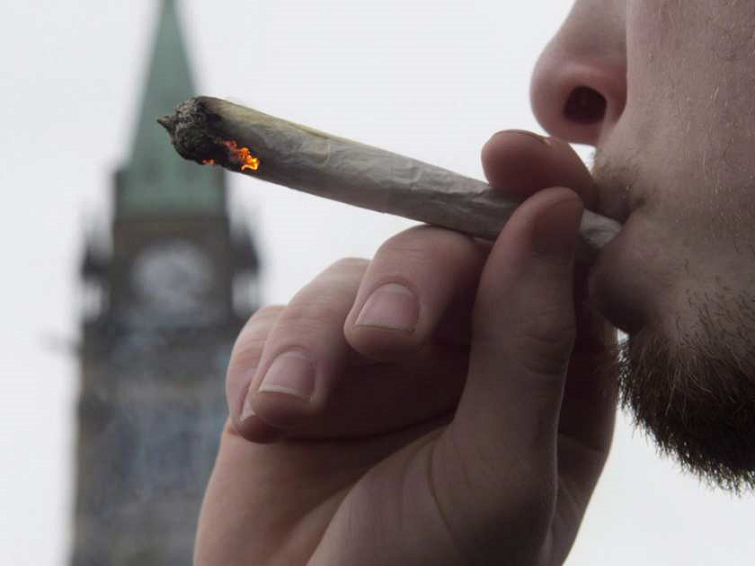 Damn... They couldn't trim 6 pages from that report?!

In all seriousness though, I find it rather interesting that Canada cannabis ban on marijuana arose from similar circumstances as it did in the US for alcohol. With alcohol, I can at least understand the moral dilemma people had because of what alcohol can do to individuals who abuse as well as what effects it would have on families it but I don't understand why marijuana was singled out in Canada. Was it because alcohol was already banned in candle for consumption and thus it was just a easy moral issue to grab onto or was there other reasons going on for way cannabis was targeted?
I'm legally blind, so if I write something...odd I blame the Voice dictation program. Just let me know if it's so bad that I need to repeat it!

T
PARLIAMENT'S VIEW OF POT OVER THE YEARS

His Landmark Commission On Drugs Urged Legalizing Marijuana In 1973