At a candidate forum in Sandy on Thursday, the six law enforcement officers in the race to become the next Salt Lake County sheriff said they support the legalization of medical marijuana, but that Utah might not be ready for recreational use of the drug.

Activists launched an effort in June to put the issue on Utah's 2018 ballot in hopes of bypassing the state's conservative Legislature, which has resisted legalization for the past three years.

Many states have legalized the drug to help people with cancer and other chronic medical conditions ease their pain.

Five of the six candidates said the drug should be legalized, particularly if the people of Utah vote to do so. "I am the father of four," said candidate Fred Ross, chief of the Utah Transit Authority police force. "If anyone of them needed it to increase the betterment of their lives, I'd give up my gun and my badges to make sure they had the right treatment."

"I never have used marijuana," Manatau, a former corrections officer and police officer, said before leaning into his microphone to joke: "I hear it's fun."

But he, like the others, said that if the people of Utah want legalization and vote to make it happen, he would defend that choice.

The question was the last asked during the two-hour forum at Salt Lake Community College's Larry H. Miller Campus in Sandy – a fitting site because Miller was a longtime advocate for Utah police.

The candidates, each with a record of police work in Utah, are running to replace Democratic Sheriff Jim Winder, who resigned last month to become the Moab police chief.

By law, the 1,100 members of Salt Lake County Democratic Party's Central Committee get to select the interim sheriff.

Voting is slated for Aug. 12, and the winner's name will be submitted to the Salt Lake County Council for confirmation.

The interim sheriff will serve until the end of Winder's term, which runs through next year.

More than 100 members of the Central Committee packed an auditorium at Salt Lake Community in Sandy to ask the candidates questions generated by its various caucuses.

The queries focused on some of the county's biggest issues, including immigration, domestic, veterans and homelessness.

The problem of overcrowding at the county jail – one of the issues that Winder said led to his departure – was front and center on the Thursday agenda.

It's not a new problem, the candidates noted. The jail was overcrowded within 21 days of its opening in 2000, Hansen said, but locking more people up isn't a solution.

Hansen, a Unified Police Department detective, suggested that the jail should have a receiving center to assess individuals and connect them with services like mental health care and drug treatment as soon as they walk in the door.

Others agreed: "We need to triage the problems people have so we can stop the cycle of people returning to jail," said Anjewierden, a retired UPD chief of police services in Kearns.

Hughes, a UPD sergeant, said addiction should be treated as a disease, not as a reason to send someone to jail.

"We have to change our mindset," he said. "Don't build more jails – build more opportunities."

Each of the six said part of the solution is to find more beds, and most advocated for the opening of two additional pods – about 370 beds – at the Oxbow jail, which would cost the county about $9 million.

On his way out of office, Winder told the County Council it needed to raise property taxes to expand the number of available jail beds

Rivera, a deputy chief of police services, said communities need to be willing to help pay for more jail space to help keep the community safe, just as they might buy a security system to protect their own homes.

If selected, Rivera would be the first woman to serve as sheriff in Utah's most populous county. 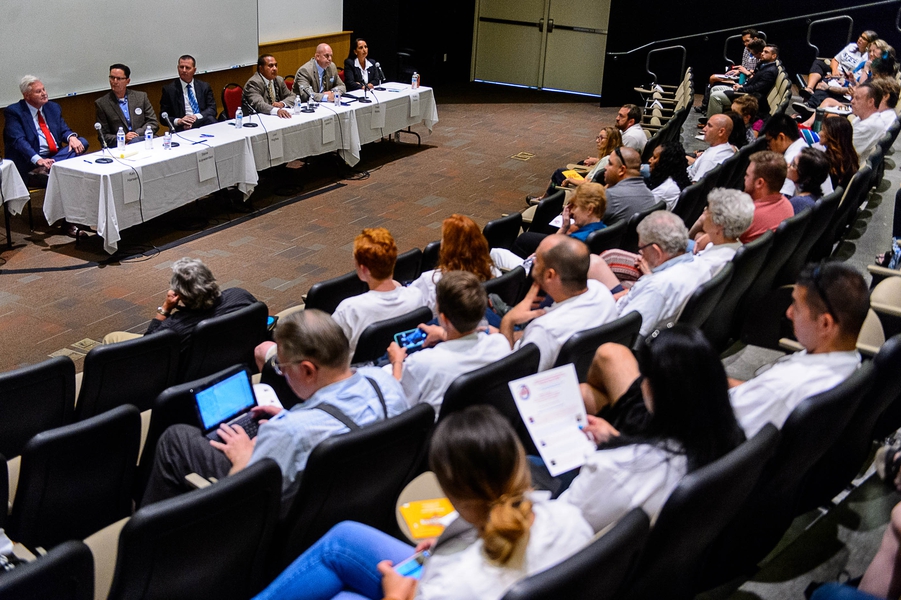