420 Staff
Medical marijuana production centers and dispensaries could become part of the Hawaii landscape as soon as 2017, under recommendations a task force is sending to the state Legislature.

The Medical Marijuana Dispensary Task Force wrapped up its work Tuesday with a list of recommendations, said Rep. Della Au Belatti, an Oahu Democrat and chairwoman of the House Health Committee, who has been overseeing the task force.

Au Belatti said she's working on a bill for the House to consider when the Legislature convenes Jan. 21 for its regular session.

- The Department of Health shall determine the number of dispensary licenses based on a guideline of 1 for every 500 patients, adjusted annually, based on the patients' residency. There shall be at least one dispensary in each county.

The fee for an application for a license to operate a dispensary shall be $20,000, with $18,000 refunded to unsuccessful applicants. Annual renewal licensing fees for dispensaries shall be $30,000.

- In the event that an island or a county in the state lacks a single licensed dispensary by July 1, 2017, a dispensary that is licensed and established on another island or in another county may petition the Department of Health to allow an owner or employee to deliver medical marijuana products to a qualified patient or caregiver of the island or county that lacks a dispensary.

- The Department of Health shall determine the number of medical marijuana production center licenses to issue based on a ratio that producers will have up to 1,000 plants at any one time.

- Beginning Jan. 1, 2017, the Department of Health may offer a minimum of 30 producer licenses.

- Medical marijuana production centers may distribute only to licensed dispensaries or other production centers. The Legislature shall preserve the right of qualifying patients to continue to cultivate their own medication if they wish to do so.

- Producers and dispensaries shall be permitted to transport medical marijuana within Hawaii and between the Hawaiian islands in accordance with security requirements to be established by the Department of Health.

- Dispensaries, producers and manufacturers shall comply with County zoning ordinances, provided that counties cannot enact zoning laws that target or discriminate against dispensaries or producers.

- No dispensary or producer shall be located within 500 feet of public and private schools.

- Sales of medical marijuana shall be subject to the Hawaii General Excise Tax.

The Legislature will be asked to appropriate $510,000 from the general fund for each of the next two years to set up the program, to be reimbursed from application and license fees. The Department of Health would create five positions to help implement the program.

Hawaii's law allowing doctors to prescribe marijuana for certain conditions was signed by former Gov. Ben Cayetano in 2000. Marijuana can be prescribed for these conditions: cancer, glaucoma, HIV/AIDS, cachexia or wasting syndrome, severe pain, severe nausea, seizures, including those characteristic of epilepsy, severe and persistent muscle spasms, including those characteristic of multiple sclerosis or Crohn's disease and any other medical condition approved by the state Department of Health. 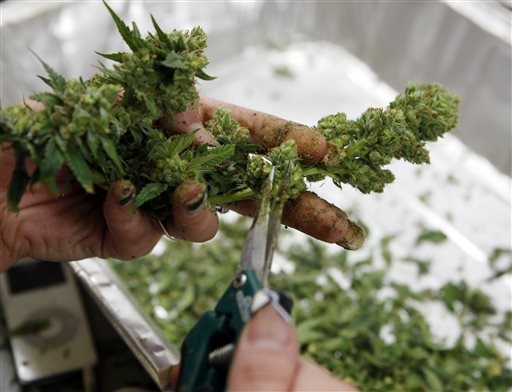