Banking remains a thorny issue for legal marijuana businesses, but regulators in Washington state are trying to make it easier for financial institutions to track their pot-related customers. In the last few days, the state's Liquor Control Board has started posting the sales activity of licensed marijuana growers, sellers and processers online – along with any warnings or fines issued to businesses caught out of compliance. The data show that two of state's top-selling pot shops are in the southwest Washington city of Vancouver, just across the Columbia River from Portland, Oregon.

The idea behind posting the information online is to make it easy for banks or credit unions to discover red flags that might indicate illegal activity, officials said. Early this year, the U.S. Justice and Treasury departments gave banks permission to do business with legal marijuana entities with conditions, including trying to make sure the customers are complying with regulations.

"The more information that's out there, it helps them know their customers and gives them an opportunity to identify behavior that's not what they thought it would be," Scott Jarvis, director of the state Department of Financial Institutions. "If somebody reports that they're selling $10,000 a month, and all of a sudden the bank sees them depositing $40,000 a month, there's room for inquiry there."

Colorado, the only other state with legal marijuana sales, does not make such data available online. Denny Eliason, a lobbyist for the state banking industry, said it can only help to have the information easily accessible because "the federal guidance requires financial institutions to know their customers at an unprecedented level." While some credit unions in the state are already opening accounts for pot businesses, he said it's too soon to say whether the online access will encourage more to take marijuana money.

"The sense I get from the financial industry is still one of caution," he said. "There's so much risk." Under the guidance, banks must review state license applications for marijuana customers, request information about the business, develop an understanding of the types of products to be sold and monitor publicly available sources for any negative information about the business.

The sales data show that since sales began in July, one of the state's top-selling pot shops has been New Vansterdam in Vancouver, which has reported nearly $1.7 million in sales. Another Vancouver shop, Main Street Marijuana, has sold about $1.1 million worth. By contrast, Seattle's first licensed pot store, Cannabis City, which like many of the stores has been beset by supply problems, reported $1.3 million in sales.

Sales are allowed to out-of-state residents. But among the federal government's concerns in allowing states to move forward with legalizing marijuana is to prevent diversion to other states. Oregon is set to vote this fall on whether to legalize marijuana.

The enforcement data posted online so far concerns activity from last month only, but it reveals that the state has already issued fines to businesses. One licensed marijuana grower, Botany Unlimited Design and Supply in Pasco, was fined twice: $2,500 on Sept. 16 for having unauthorized product or unapproved storage, and $1,000 on Sept. 25 for failing to maintain a required security alarm or surveillance system.

Liquor board spokesman Brian Smith said Botany Unlimited is scheduled for an informal hearing about the fines next month. The company declined to comment when contacted by The Associated Press. Another licensed grower, Green Chiefs of Granite Falls, was fined $5,000 for failing to use or maintain systems designed to track its marijuana. Green Chiefs hasn't informed the board about whether it wants to seek a hearing over the matter, Smith said. The company did not return phone messages from The Associated Press.

Two other companies were issued fines that were not reflected in the September data, Smith said. After hearings, Green Apple, a licensed grower in Silverdale, was fined $1,600, and BMF Washington, a grower in Raymond, was fined $3,000. The reasons for those fines were not immediately clear. About three dozen other businesses have been issued warnings, mostly for failing to file sales reports with the board. Many didn't realize that they were required to file the reports even if they did not sell any marijuana, Smith said. "Really what we've found is the industry has been very careful," he said. "They want to do everything they can not to jeopardize their license." 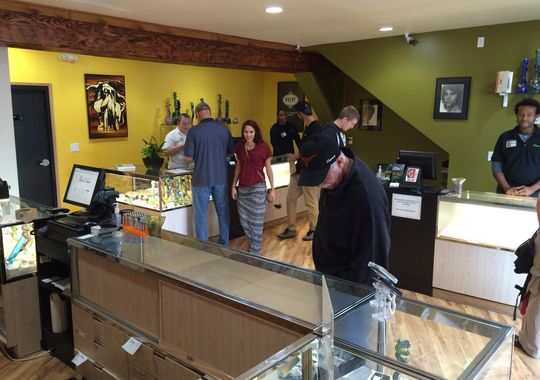