What is this? Nutrient Burn? (PIC)

My plants are 3 weeks old from seed, growing in canna coco coir. I am using the canna line of nutrients (coco A+B, rhizo, cannazyme, PK-13/14). All of my plants are in JUST coco except the plant in this pic (which is canna coco + 15% perlite)

The edges of my plants are going badly brown after a feeding using the canna websites schedule (EC 1.6, pH 5.8), its affected all but one so far. 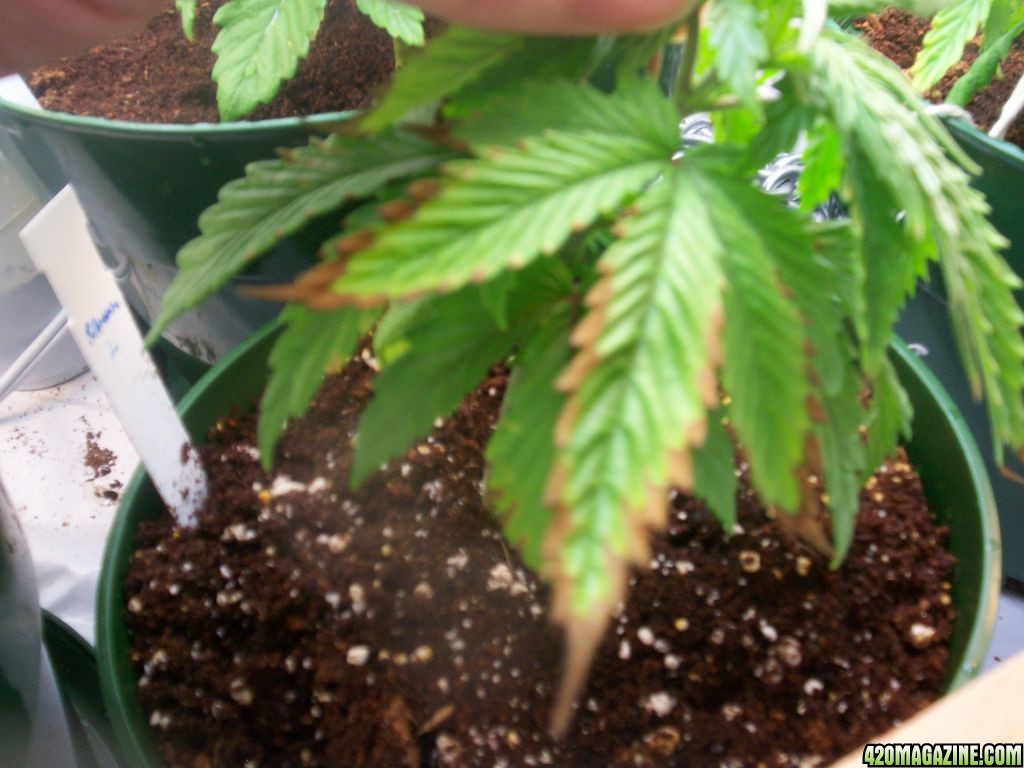 This was on Sunday and i've since fed them very dilute nutes with no improvement.

Yeah, looks like nute burn to me as well... but by "no improvement", do you mean the leaves stay brown (which is to be expected) or that there is no sign of new growth? Or are conditions worsening day by day?
First LED grow: https://www.420magazine.com/forums/...s-soil-grow-medibud-super-silver-haze-ww.html
H

All growth has stopped, new leaves are turning brown, though the rate of this is slowing

The EC of my runoff is 1.4, so I don't even understand how this happened .. unless it takes a few feedings before they come back?

The last 2 feeds have been super low concentration (not gonna flush with plain water as that will displace all the microfauna in the coco).

PS: Thanks for your response, was turning into a ghost thread

IMO part of the problem could be your soil ratio, roots dont like really packed together soil, it makes it so there is no oxygen for the roots. start using a higher ratio of perlite like 30-40, you will boost your oxygen to your roots and see faster responses
Green's Help Me Hotlne (Come on in if you are having any problems)

id repot and put in new soil/media immediately. thats locked out its nute burn.
use 1/4 nute when starting off. watch how your plants react for 2 or 3 days afterward before going to 1/2 strenght. when they get past 5 weeks they need more nutes. never over nute.

those are high p-k levels for 3 weeks from seed.
seedling dont need nutes. kelp folair is all they need then start slowly adding nutes gradually.
H

Thanks for all your help guys. Sorry for slow reply, had no internet back until today.

They are ... slowly recovering. Some of them experienced no burn at all, and have since continued to fluorish. Luckily of these is the most important plants (A northern lights F1 fem, which is SOOOO short but has so much growth, not even sure how to take cuttings cuz the branches are like 3 inches long

The ones with nute burn, well they are definitely growing, it just seems slow and I dunno how fast they would typically grow (its a strain called Fast Pine)

N.W green, i'm not using soil, i'm using coco coir (made by Canna). I put perlite in one of the pots, but then stopped immediately, and i'm glad I did. This coco has PLENTY of aeration.

Sully508, i'd rather not transplant them as I just put them in those puts like 1.5 weeks ago. I decided to stop using 'strength' altogether, and just make up my plants feed until it has the desired EC (adding each nute in proportion of course). Their last two feedings have been 0.8EC and 1.0EC respectively, with a runoff about 1.5 EC. So that's pretty indicative they were overfed by the runoff being so much higher. I won't flush these plants with just water as they would destroy the microfauna in them.

Thanks for the help guys, if they actually look HEALTHY, i'll put up some pics