Medical marijuana can manage and sometimes cause the complete remission of Crohn's Disease symptoms like pain, inflammation, cramping and nausea.

Thousands of medical cannabis patients will tell you medical marijuana can treat and suppress the pain, inflammation, cramping and nausea of Crohn's Disease. New studies come out every year backing up the evidence for use of the herb to treat the widespread gut ailment, whether by smoking, vaping, edibles, and other options. Patients are saying there is an alternative to toxic prescription drugs, and access to it is expanding.

The case for medical marijuana for Crohn's Disease

The Crohn's and Colitis Foundation of America – which notes that opioids are a treatment for Crohn's pain – doesn't mention the word "marijuana" or "cannabis" on their web site once.

Which is strange, because the medical history, as well as cell, animal and human trials make a rock-solid case for cannabis as an alternative to pharmaceuticals. Medical cannabis is legal in some form in 35 states, as well as several countries.

The auto-immune related disease of the digestive system is thought incurable and can often result in surgery. About 1.4 million Americans are thought to have some form of IBD, and a range of anti-inflammatories and narcotic painkillers are often prescribed.

Treating and stopping inflammatory bowel disease with existing drugs is "currently one of the biggest challenges in the field of gastroenterology," researchers note.

Researchers noted in 2011, that "A significant number of patients with IBD currently use marijuana. Most patients find it very helpful for symptom control, including patients with ulcerative colitis."

Lab evidence for marijuana for Crohn's

The evidence is indisputable, cannabis' active ingredients – the cannabinoids – interact like keys in a lock with receptors on nerve cells – primarily in the brain, but also in the gut.

Researchers wrote for a paper in Pharmacology in 2014 that "In ancient medicine, cannabis has been widely used to cure disturbances and inflammation of the bowel. ... In a prospective placebo-controlled study, it has been shown what has been largely anticipated from anecdotal reports, i.e. that cannabis produces significant clinical benefits in patients with Crohn's disease. The mechanisms involved are not yet clear but most likely include peripheral actions on cannabinoid receptors 1 and 2, and may also include central actions."

In 2002, researchers noted that THC "modulates the immune response of T lymphocytes" to decrease pro-inflammatory reactions. "This may explain why THC is effective against inflammation ... in multiple sclerosis, CROHN's disease and arthritis."

In 2013, researchers noted that pot molecule cannabidiol appears to be a gut protectant. CBD interrupts runaway inflammation in the bowel, by reducing the damage to bowel muscosa from the pro-inflammatory substance interleukin 17A.

A small human trial in Israel in 2011 found that "Of the 30 patients 21 improved significantly after treatment with cannabis. The average Harvey Bradshaw index improved from 14 to 7. The need for other medication was significantly reduced. Thus, before cannabis use 26 patients used corticosteroids, but only 4 after start of the cannabis therapy. Fifteen of the patients had 19 surgeries during an average period of 9 years before cannabis use, but only 2 required surgery during an average period of 3 years of cannabis use." Authors concluded that "this is the first report of cannabis use in CROHN's disease in humans. The results indicate that cannabis may have a positive effect on disease activity, as reflected by reduction in disease activity index and in the need for other drugs and surgery."

In 2013, researchers reported "complete remission" of Crohn's Disease Activity in 5 of 11 cannabis test subjects in a prospective 21-person placebo-controlled study. Eight weeks of THC-rich cannabis "produced significant clinical, steroid-free benefits to 10 of 11 patients with active Crohn's disease, compared with placebo, without side effects. Further studies, with larger patient groups and a nonsmoking mode of intake, are warranted."

And patients aren't just smoking pot to help regulate the ECS in the gut. They're vaping, dabbing, or taking low-dose edibles, and suppositories.

As for smoking, researchers in the 2013 trial, reported that "no significant side effects" were associated with cannabis inhalation. Test subjects reported improved appetite and sleep compared to placebo group.

Patients also report learning to tolerate the side effects, as well as take high-CBD, low-THC formulations. Cannabis is also far less addictive that opioids and doesn't damage the liver like long-term use of many NSAIDs.

Cannabis is medically legal in 23 states and CBD is legal in 12 more, and counting, and patients in pain aren't waiting for more medical proof. That's why it's worth repeating: medical marijuana helps treat Crohn's Disease. 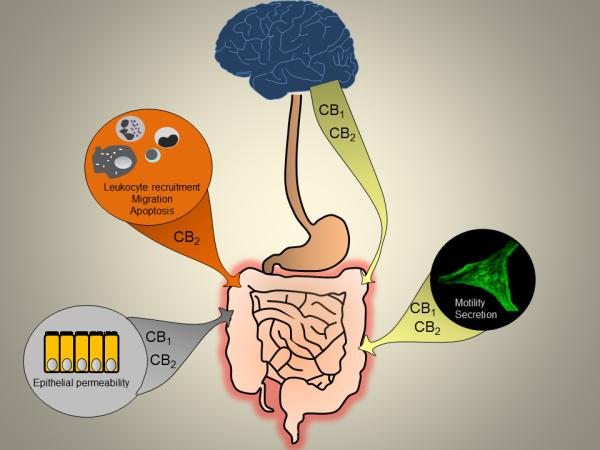 K
How Marijuana Works To Provide Relief From Gut Inflammation, Pain, And Cramping