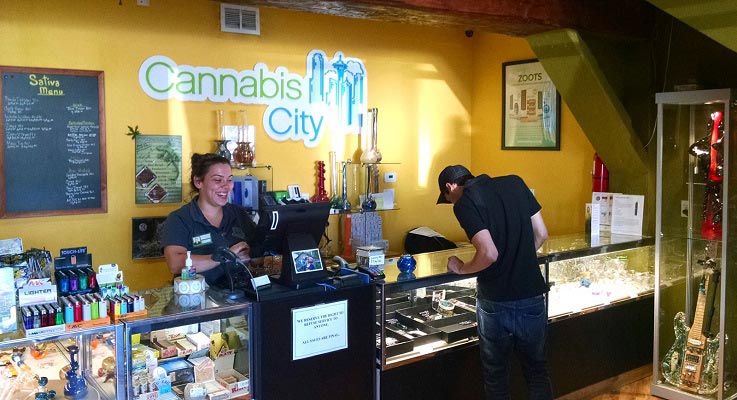 When it comes to fast-growing industries, there may be none with better growth prospects than marijuana. Based on some estimates, legalizing marijuana across the country could lead to a $35 billion market. Separately, NerdWallet has suggested that legalizing marijuana would generate around $3.1 billion in annual tax revenue for states and potentially the federal government.

Where are we now? Colorado recently announced that monthly marijuana sales topped $100 million for the first time ever in August, putting its marijuana industry on pace for more than $1 billion in annualized sales. In Washington state, retailers sold slightly more than $257 million over the first trailing year of recreational marijuana sales. Oregon just started selling recreational marijuana legally as of Oct. 1, 2015, and shops there registered about $11 million in retail sales during its inaugural month.

In other words, the U.S. marijuana industry right now is likely generating around $1.5 billion to $2 billion in annual sales, inclusive of medical and recreational marijuana, but could still have growth potential of around 2,000% based on those aforementioned estimates.

Three surprising industries that would benefit if marijuana were legalized

If marijuana were indeed legalized across the board at the federal level, you’d see some expected industries, such as retailers and medical marijuana dispensaries, benefiting in a big way. Retailers would likely see their foot traffic and profits soar if the legal barriers to marijuana were removed. Drug developers focused on cannabinoids from the cannabis plant would also likely see a boost, with the obstacles to researching marijuana for medicinal purposes largely removed and the emphasis of research shifted to discovering what medical benefits cannabis could offer.

However, there are more beneficiaries to legalizing marijuana than just pot shops and marijuana-based drug developers. Here are three surprising industries that could witness a boost in their profits if marijuana were legalized by the federal government.

Arguably the biggest potential beneficiaries despite having next to nothing to do with the marijuana industry are banks and credit unions.

As it stands now, roughly 3% of the nation’s 6,700 banks are working with marijuana-based businesses to provide access to basic checking accounts and other financial services, potentially including access to lines of credit. Although many of the 23 states where marijuana is medically legal have lengthy rules that govern how banks can legally interact with marijuana businesses, most banks choose to avoid the marijuana industry altogether. The reason? The federal government still views the marijuana plant to be illegal, so offering financial services to a marijuana business could be construed as money laundering.

Another surprising beneficiary, although to a lesser degree, could be companies that benefit from an increase in tourism.

The only country worldwide that’s legalized the possession, sale, transport, and cultivation of marijuana is Uruguay, but there are strict rules still in place as to how much a consumer can buy monthly. Further, tourists who don’t live in Uruguay aren’t allowed to buy marijuana. If the United States were to legalize marijuana across the board, you can bet on a corresponding boost in tourism.

Need proof? According to Hotels.com via NBC News, on a year-over-year basis from 2013 into 2014 there was a 73% increase in hotel room demand during Denver’s 4/20 festivities. Similarly, Hotels.com points out that there was a 68% surge in hotel room demand the week Seattle opened its recreational marijuana stores to the public. Hopper.com also noted some nominal boosts to airfare interest to various cities within Washington following the legalization of recreational marijuana.

Finally, consider what a legal marijuana industry could do for the jobs market.

According to a report from the Marijuana Industry Group, Colorado’s burgeoning marijuana industry has created 10,000 jobs, including between 1,000 and 2,000 that joined the workforce between Jan. 2014 and May 2015. Not every state has the market potential or size of Colorado, but extrapolated out the employment numbers could be enormous.

In June 1994, the National Organization for the Reform of Marijuana Laws, or NORML, released an abstract discussing the impact of legalizing marijuana at the time. According to Dale Gieringer, Ph.D. and lead author, some 60,000 to 100,000 jobs would be created by legalizing the drug. This estimate almost seems woefully outdated and low now considering the 10,000 jobs created just in Colorado, but it speaks to the economic opportunity that could come to fruition if marijuana were legalized.

The potential is there, but change is no guarantee

The market potential for marijuana has always been there, and the economic reasoning behind legalization makes sense in many respects. However, the fact remains that lawmakers still appear to be a long way off from changing their stance on the schedule 1 drug.

The biggest barrier standing in the way of legalization is that lawmakers aren’t convinced of marijuana’s long-term safety profile. For decades, researchers focused solely on marijuana’s adverse effects, and only recently shifted gears and began examining its possible medical benefits. It takes a long time to build up an accurate safety profile of a drug, and lawmakers are simply not going to be comfortable deciding one way or another until all the puzzle pieces are put together. There simply is no timetable as to when that might happen.

We also have to contend with the 2016 elections. Lawmakers are unlikely to take a hardline stance on marijuana one way or another with the elections coming up for fear of alienating one group or another — marijuana support on a national level favors legalization, but it’s very close to an even split.

Minnesota will open its medical marijuana program to patients who experience chronic pain starting next summer, the state Department of Health Commissioner Ed Ehlinger said Wednesday, according to the Star Tribune.

The expansion is expected to drastically increase the number of patients in the program, which has low enrollment due in part to its strict rules.

Medical marijuana is not allowed in smokeable or leaf form, requiring costly extraction of the plants’ active ingredients, dispensed to patients in the form of pills, oils or vapors.

The state law puts other restrictions on marijuana’s use.

“Just from a social compassion standpoint, people who are experiencing intractable pain and believe this is going to be helpful to them, deserve to find out”, the governor said. Their executives said this could finally allow them to reduce the prices for the medicine they’re selling.

Opponents of the bill legalizing medical marijuana were concerned that it could lead to wider use of the drug, particularly among children, and serve as a first step toward legalization of marijuana for recreational use in Minnesota.

“As a physician, I share the concerns of health care providers and I sympathize with their desire for more information”, Commissioner Ehlinger said.

That hesitance was clear to current patients early on, finding that many doctors wouldn’t sign off on their participation.

Medical marijuana is effective in treating severe and chronic pain and at times has been found to be more effective than the conventionally prescribed painkillers. Intractable pain will become a qualifying condition for medical marijuana effective August 1, 2016, unless the legislature passes a law stating otherwise.

“We get to help a ton more Minnesotans and maybe even save a few lives”, Munson-Regala said, adding “pain either doubles patient count or multiplies it by 10?. In response, MDH will help coordinate a broader conversation with the state’s medical community about how to effectively address pain management.

Studies Are Showing Weed Could Treat ADHD Better And Safer Than...