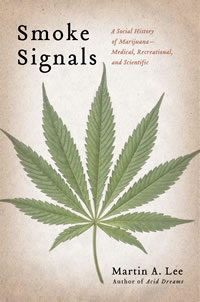 Seldom have I read a book four times in succession. In fact, I can’t remember reading any book three times in a row, let alone four. Smoke Signals is such a book! My initial reading was very enjoyable. I learned and re-learned a tremendous amount of historical fact and not a small amount of medical research regarding Cannabis. The book is easy to read and is written in largely chronological order, starting way back in antiquity, but really focusing on Cannabis in America during the Twentieth century. If that sounds boring to you, it’s only because you don’t know what happened! Names from the past, like Alan Ginsburg and Lawrence Ferlinghetti are discussed, and these people are given their proper recognition….finally.

But other names, such as Todd Mikuriya, MD are introduced as well as many others who have made a difference in the struggle for legal Cannabis.

My first reading exposed me to a very colorful history, larger than life personalities, and a social-political drama quite different than what we saw on TV and learned about in school. This was all a very enjoyable reading experience. I put the book down…..thought about what I read and the implications thereof….and immediately re-read the book.

On the second reading it dawned on me that marijuana prohibition from the beginning had nothing to do with public health and everything to do with racism, authoritarian control and protecting drug companies. Again, this is nothing I hadn’t heard before, but I was unaware of the long history of bad policy. I had always assumed it started with Richard Nixon, and while he is indeed a chief villain, he’s certainly not the first, nor the last to persecute marijuana users.

After the second reading I tried to explain all this to my wife, trying to describe the magnitude of the deception and arbitrary prohibition laws. She asked, “If it’s so good, where is the research?”

On the third reading, I concentrated on the medical research of Cannabis. I was not at all aware that a long list of government sponsored studies, designed to show the public health hazards of pot smoking were commissioned and completed over the years.

While each of these studies were done with the goal of making Cannabis look dangerous—built in bias that would make any real scientist recoil—-the studies actually showed Cannabis makes people more healthy, not less! Wow.

I even assumed that habitual smokers would have lung damage at the very least, and true to form the Federal Government spent millions on a study to show how marijuana smoking is even worse than tobacco when it comes to lung disease.

WRONG! Even with the built in bias of the study, pot was shown to be PROTECTIVE of lung tissue, not damaging at all. In fact, people who smoked both pot and tobacco had lower incidence of lung disease than those who smoked only tobacco. Pot smokers had healthier lungs than people who smoked nothing! That was very new information to me, and sure enough, this was a properly designed study, funded by a hostile government.

All this got me a bit angry and I started to notice a pattern in the book.

A Social history of Marijuana—Medical, Recreational and Scientific is the subtitle of Smoke Signals. However, while the book certainly delivers exactly that in a most entertaining manner, in my opinion there is a deeper story here.

Why, given reams of data and thousands of years of anecdotal evidence that shows that Cannabis is safe and healthy to ingest, is the government waging war on this plant?

It is this “big picture” put into perspective with all the personalities and their individual stories that are accurately and objectively recounted in this book that has made the difference for me.

Reading this book allowed me to comprehend, process and come to some conclusions regarding the criminal manner in which the government has taken something very good and demonized it, essentially brainwashing a large segment of the population.

All throughout the book, it is demonstrated that Cannabis is not only harmless, but also healthy! That’s right, using Cannabis will make you a much healthier person. It relieves stress, protects from myriad of diseases and gets people off of dangerous pharmaceutical drugs that have horrible side effects….

And our government is doing everything they can to stop its use. Why?

I won’t answer that question right here, but the answer lies in the pages of Smoke Signals. Sure there are some dots that need connecting, but Martin Lee makes it pretty easy with his engaging narrative.

In an era where government spending is out of control and individual rights are being stripped away, one after the other, several things begin to stand out.

1.Cannabis activists are more peaceful than almost any other group and are actually freedom fighters. Reliable, tireless and passionate and PEACEFUL. Furthermore, they’re one of the few groups getting results! We’re making headway!

3.Big Pharma is scared to death of what might happen to their profits if people started smoking marijuana en masse.

Smoke Signals will clear the air when it come to Cannabis. What an excellent read. I’ve given away three copies already!

420 Product Review: Everyone Who Has Died From Smoking Marijuana