Petersburg voters spoke loudly in favor of supporting marijuana in the Petersburg Borough. Moving forward, the product will be taxed and potentially bring much needed funds to the borough during tough fiscal times in the Last Frontier State.

The unofficial results showed a landslide victory with 701 no votes to 414, on the only ballot initiative for this year's municipal election. The polls were busy Tuesday, with 1120 people taking the time to cast their ballot at the Community Center, in addition to absentee ballots cast.

Those numbers will change when the last 18 absentee ballots are received, and the results are affirmed by the borough assembly Friday morning. Borough clerk Debbie Thompson said the turnout was great, with just over 41 percent of registered voters making their mark, the highest percentage in three years.

Now, marijuana can be available for purchase in retail stores, for people looking to purchase marijuana for recreational and medical use. And a cultivation operation out the road gets the green light, as far as the borough is concerned. The applications of two hopeful business owners are still in the works. The vote also means licensed manufacturing businesses and testing facilities will be allowed in the borough.

Susie Burrell is planning to open a retail market in her downtown establishment. All she could say was, "I'm excited."

Gary Morgan spent a good portion of Tuesday night awaiting the results at home and he was thankful for the vice presidential debate, because it kept his mind off the municipal election.

"Thank you Petersburg. You've voted and now it's clear what the community wants. This is historic but not scary," Morgan wrote in a Facebook post after receiving the results. "Thank you to all who've helped and supported me through this very uncertain time."

Morgan said he promises to be a responsible business owner and work hard to earn the Petersburg Borough tax revenue. He welcomed people looking for medical strains, saying there'd be plenty of variety for various medical conditions. Morgan's said for months, helping people in Southeast Alaska with medical needs is a top priority of his new business venture.

"It's a new chapter and I'll do everything possible to make it a positive change," he ended his post.

Grant Trask heard the news Wednesday morning, when his wife told him the results. Trask said he doesn't regret the effort of the citizen's initiative and hours he spent collecting signatures to ensure the issue went to a vote.

"I'm glad the town stepped up," he said referring to the voter turnout. "Which should give a mandate to the borough assembly and also affirm those who are users that they can be legal in how they can do this."

Molly Taiber said voting is important because election results can impact a person's daily life in Petersburg, and she wants to set a good example for her 2-year-old daughter, Libby. The pair voted early and together, and Taiber said she liked the idea of regulating the product.

"I do not want it prohibited," she said. "And if it is prohibited, I believe that would affect Petersburg negatively, because it would keep up the instigation of black market sales."

For Taiber viewing it as a positive revenue source doesn't stop at the borough boundary. She said the impact of the

plant can positively impact the state.

"We all understand this crunched budget times, and this is an excellent opportunity for the borough and Alaska to take advantage of this," she said.

Dave Burleigh's been voting for decades because it's important for him to know his opinion matters.

"I'm just glad that I had a voice in saying whether we have sales of marijuana in town," Burleigh said after casting his vote Tuesday 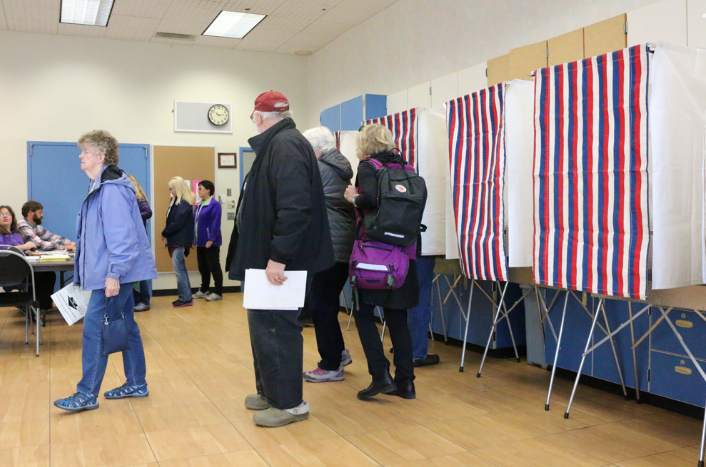