Arizona - Yuma Sector Border Patrol agents seized 810 pounds of marijuana and arrested 10 alleged smugglers Thursday, according to U.S. Customs and Border Protection. Wellton Station agents assigned to the All-Terrain Vehicle Unit near Gila Bend were tracking footprints when they located four suspected illegal immigrants carrying backpacks. The men reportedly tried to flee from agents, but were apprehended a short time later and found to be in possession of 258 pounds of marijuana. The drugs have an estimated value of $129,000.

The marijuana and three of the men were turned over to the Maricopa County Sheriff's Office. The fourth person, a juvenile, will be processed for deportation, according to U.S. Customs and Border Protection. In a separate incident, agents near Wellton contacted six people near Interstate 8 who were allegedly carrying 13 backpacks containing marijuana. Authorities estimated the 552 pounds of marijuana is worth $276,000. The marijuana and alleged smugglers were transported to the Wellton Station for further processing. 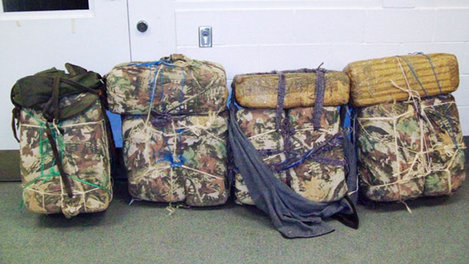