The Camarillo City Council on Wednesday extended a temporary urgency ordinance for another 10 months that will continue to prohibit nonmedical marijuana facilities, such as dispensaries and private marijuana cultivators in the city.

What is still legal under the proposition remains legal in the city while the interim ordinance is in effect. People may still possess limited amounts of marijuana, and private indoor cultivation of six marijuana plants or less, subject to reasonable regulations, is still allowed in the city.

A temporary 45-day moratorium the council approved on Nov. 16 was set to expire Dec. 31, but the council made the decision Wednesday since they won't be meeting again this year.

Government code allows the first extension of the urgency ordinance to be extended for 10 months and 15 days, so it will expire on Nov. 17. The council has the option of extending it for another year in November.

The moratorium would be rescinded if the city drafts a permanent ordinance earlier than November.

"We don't know what the future holds. This is something new in California," City Attorney Brian Pierik said about the legalization of recreational marijuana use in the state.

Pierik said extending the ordinance allows the city to learn more from the state about additional or different regulations. Pierik said one of the issues that the council will consider is whether a city permit should be required to grow marijuana indoors.

No deliveries of recreational marijuana are allowed in the city. Under a separate city ordinance, medical marijuana dispensaries are also prohibited.

Speaker Dan Kirk, a retired executive, told the council that he has a problem with the urgency ordinance because it impinges on people's individual rights and freedoms and that the council shouldn't regulate what people do inside their own property if it's not harming anyone else.

Pierik said regulating indoor cultivation to make sure that it's done in a safe manner is important because growing marijuana can impact neighboring properties if something catches on fire or if it's done in an apartment building where people live close to one another.

"As long as folks are doing this in a responsible manner, I don't think they're going to find this moratorium is going to impact their ability to proceed," said Pierik.

"We're not going to be able to uphold both of them, and I think that's something I've been struggling with. In the meantime, while I continue with my struggle, I'm happy to support this. It does follow what the state says, but it's not getting us in too deeply at this point. It does give us more time to figure out what we're going to do," said Craven.

The council also accepted a $200,000 check from the Friends of the Camarillo Library to support the city library, including funding of new book and magazine purchases, library materials and supplies and other needs of the library. It also provides support for library programs for children and adult patrons of the library.

Funds come from book sales at the Friends of the Camarillo Library bookstore located at the Camarillo library. It sells used books, magazines and audio and video materials that are donated by the community. 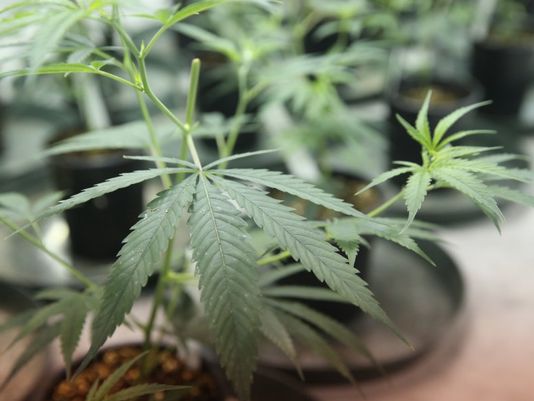 K
CA: Camarillo Calls 'Time Out' On Recreational Pot Use