Is this potting mix OK? Questions about potting mixes and watering too

Having such a hard time with growing (problems with heat, etc.), but this time I will ask about the potting mix we're using.

It is an universal potting mix sold here in Spain and I had to look up the brand ("Sisanflor") and get information on what's in it.

The mix consists of composted pine bark and wood fibers

Translating what I could get on info:

"It is a substrate composed of composted plant materials , controlling the particle size, moisture and all its process. High in natural nutrients. Product stabilized and biologically active ."

I attached a picture where you can clearly see the bark and the fibers.

Now I read that pine bark is really bad and I am slowly believing that aside other problems (Spanish heat etc.) our soil also is to blame for us failing to grow anything right now. (Plants are all turning yellow and about to die).

When we water we use a sprayer and usually we water only very little, to me it often seems that often only the top of the pots are wet but just half an inch into it it's already/still dry. (So I have another theory that despite us watering the water doesn't really get down to the roots and it's evaporating too quick in the current heat..here too the soil might be to blame?? We grow on the balcony in a greenhouse w/ LED lights and some natural daylight but NO direct sun. Temps right now are still very high, 90s.)

I have ordered "Canna Terra Professional" and will likely try to save what is there to save, besides I also ordered three bags of perlite although I know Canna Terra Pro already has perlite in it. (Maybe I can at least mix the perlite in the old soil and use it for our peppers aloe?)

Also...we have a gardening store right ariund the corner and I was checking what type of planting mixes they have. I have spotted big sacks of some "special mix" with a big Cannabis plant pictured on it but then I checked the description and it said something like ph 7.5 which didn't look right to me, this is why I didn't get that mix.

Wondering whether I should just throw out all the "Sisanflor" soil with the composted pine bark and do future growing exclusively with Canna Terra Pro? (A 50L bag here is only €10 from a local grow shop)?

(Which also leads to the question whether Canna Terra Pro would possibly be better for my chillies as well?)

Edit: Now I read that Canna Terra Pro ALSO has tree bark in it, so tree bark by itself cannot be that bad? 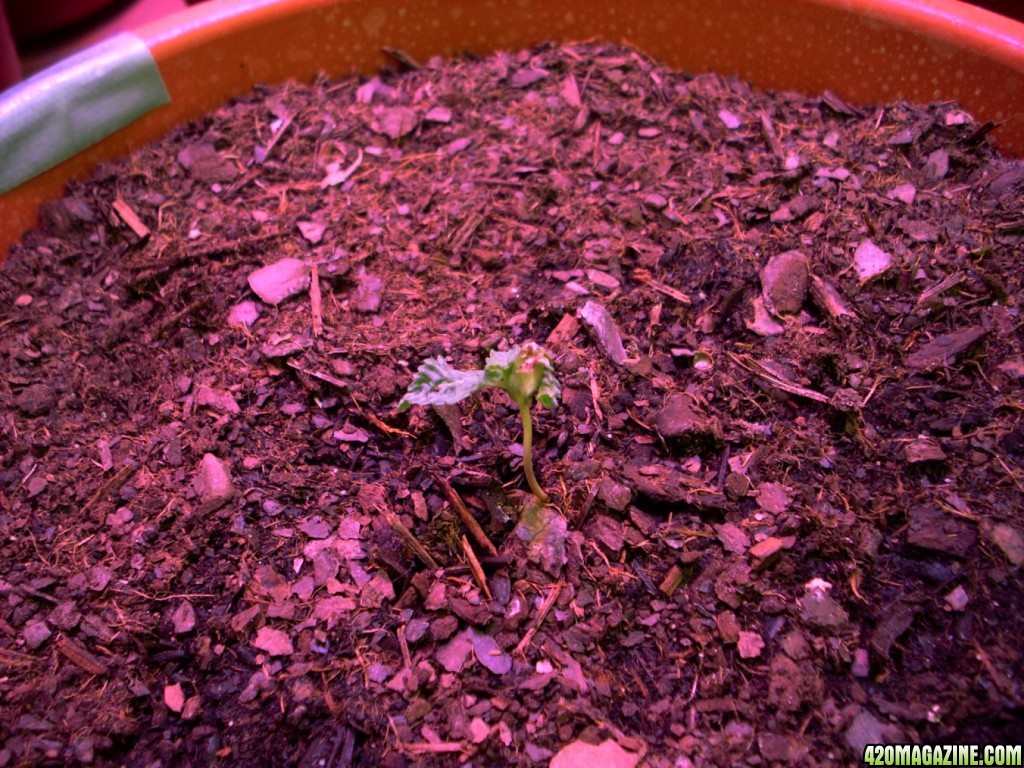 To get an idea of the ordeal...those seedlings are way MORE than 5 weeks old. THIS one, barely an inch actually looks "good". (Sarcasm). The others all turned yellow/white and are basically dying, except two. Some other people basically harvest already after 5 weeks, or their plants are at least lush with many leaves. Ours look just AWFUL.

I tried so many things already, distance of the LED lights (2x 300W Watts Marshydro, now deactivated one of the lights because 2x300W might be too much for seedlings as told by some), cutting openings into the greenhouse for air circulation etc...I am really at a loss. The only thing I have left as an explanation why nothing won't really grow is the horrible heat right now outside. Even my chilly pepper seedlings are yellowing/bleached, cilantro too. LEDs have been at distances ranging anywhere from 18"-38", right now approx. 25" with just ONE 300W (60x5W) light running right now, 18/6.

(The seedling above looks crooked because it had a seed shell stuck on the right leaf for the longest. I didn't want to pick it so I left it. Other seedlings are yellow, becoming white actually)
My Journal: "A Challenging Grow": Newbie Grows In Brutal Heat in a Greenhouse in Spain

You have to figure out if the rest of the soil is getting moist. I think you are on the right track by switching soil mix and adding perlite. As for the existing Sisanflor, I think I would cut it with perlite, biochar and worm castings, then see if the peppers like it. Maybe check the run off water PH (making sure it actually is flowing through the soil, not around it) before amending it. You might find it WAY off and need to add Peat or Lime.

Have you thought about trying a foliar feeding or compost tea foliar spray? It won't fix the soil if the soil is the problem, but it should help them some....at least the one with one sad leaf. Might buy you the time needed to fix the real issue. Could also drench the soil with microbe/worm casting tea.

Can you put these pots in a sunny window? Removing artificial light and letting mother nature have her way could also help.

Yeah I will use 25%-30% perlite with the rest of this soil and otherwise use the Canna Pro for the new seeds. I was actually thinking about worm castings but then thought that a €10 50L bag Canna Pro is a better deal especially when I read it already had worm castings and perlite in it.

I really think we did a lots of rookie mistakes, especially with the watering. What we'll do now, really as others say don't water for 2-3 days (depending) until the pot is really light and the earth dry, but THEN when we water water them good so that water actually runs out the bottom and the entire pot gets drenched. We really didn't do that in the past.

As for the lighting, I read so much about lighting and LEDs recently that my head is buzzing

The plants do get a decent amount of daylight and some sun in the morning since they're on the balcony in a greenhouse but definitely not many hours of "direct sunlight". This is why we have the LEDs. It's possible (or likely) that two 300W LEDs and the natural light was just too much, especially for seedlings. Add the heat etc...and I guess the plants had been really stressed the last weeks. Well it's a constant learning process for sure, but I am sure we'll get it right at some point

The irony: We had some autoflowers...and you can guess, at least one of them, barely one inch "tall" actually flowered and developed microscopic tiny buds! We stopped using autoflowering seeds now and just use feminized.
My Journal: "A Challenging Grow": Newbie Grows In Brutal Heat in a Greenhouse in Spain

We are all continuously learning. You should never stop learning. Even those among us whose have developed recipes for success in soil and/or hydro continue to learn and develop into better gardeners.

Good luck with the next set. Be sure to post your process and results, maybe start a journal!
F

I did some more research since the bleaching just seems so odd with the LEDs at such a far distance. It's really not only the MJ bleaching and looking awful, basically ALL my seedlings turning yellow and white.

While the distance to LED is the first thing I thought about, I am now constantly coming across people mentioning Cal-Mag and in particular that stress (LED, heat, both of them I have!!) can cause an Iron deficiency and that it might be this what's causing the bleached leaves!
And Cal-Mag (or Cal-Max) actually also has Iron in it. So I ordered Cal-Max.

Right now we're watering with tap water that I leave on the balcony for some days. I just checked the water quality report for my town and it says the water has

So I guess it's sort of hard water?

My question is whether adding CalMag to the water could possibly also have a NEGATIVE effect since there is already cal/mag in the water? Or should I just use bottled water with less cal/mag for watering when I add the CalMag for the Iron?

(It's also my understanding that I should add CalMag every time when I water, like 1tsp per gallon?)

I really don't want to upload a picture of the greenhouse because it's so sad. Picture 5 large pots with tiny 1" or so seedlings and each YELLOW, almost white. Same with my other plants. It's *possible* that the CalMag is the solution for all my problems since I am at a loss otherwise.
My Journal: "A Challenging Grow": Newbie Grows In Brutal Heat in a Greenhouse in Spain