When Oregon's new attorney general walked into a gathering Wednesday of some of the state's most ardent medical marijuana advocates, she was greeted like an old friend.

"Hopefully there is a message in my being here," Rosenblum told the group.

"I think the most important thing is to have trust, and hopefully there is at least some level of that," she said. "Trust doesn't come with a title. It comes with actions and, to a degree, with words."

Oregon's medical marijuana community hopes it has found a strong ally in Rosenblum. After all, pro-marijuana groups helped propel her into office, donating $200,000 to her campaign. That amount was about one-third of her fundraising total.

To understand the political significance of Rosenblum's visit to the Oregon Medical Marijuana Program's advisory committee, consider: The panel earlier this year issued a lengthy letter to Rosenblum's predecessor, John Kroger, detailing a host of complaints it had with advice his office had given to the medical marijuana program. Kroger, a former federal prosecutor, didn't bother to respond, panel members said.

Rosenblum, by contrast, squeezed a 45-minute visit with the advisory committee into what she described as an overloaded schedule Wednesday. It was the first time an Oregon attorney general met with the advisory panel since the Legislature created it in 2005.

The attorney general made no promises on policy changes sought by the committee. But her presence was a start, advocates said.

"I think the attorney general's heart is in the right place on this issue," said Anthony Johnson, executive director of the Oregon-based National Cannabis Coalition.

Johnson's group bought $10,000 in print advertisements for Rosenblum in her primary race against Dwight Holton, the former U.S. attorney for Oregon.

"Right now she is navigating the politics and practicalities of her office," he said.

Advocates said one of those practicalities is Rosenblum's responsibility to clients such as the Oregon State Police.

Rosenblum, as if to underscore her view of medical marijuana as an issue of public health, brought with her Linda Grimms, the staff attorney who advises the Department of Human Services and the Oregon Health Authority. The agency lawyer who advises the Oregon State Police didn't accompany Rosenblum.

Ben Mackaness, a panel member, wept as he spoke about his father's use of medical marijuana to cope with symptoms of cancer.

"I want to know that you have our back," he said.

He called the committee members "toothless wonders," due to their lack of influence on medical marijuana policies. The group has pushed repeatedly and unsuccesfully for the addition of post-traumatic stress disorder to the list of qualifying conditions for medical marijuana. And they've tried and failed to stop an increase in patient fees proposed by state officials.

"At every turn, the goal is just to quiet us and put us in a corner, and it just doesn't work anymore," Mackaness said. "I am begging for your help."

Rosenblum promised to meet with the group again.

"I can't promise you anything today," she said. "I have a position that has a lot of power, but the person with the power, that person is allowed to have compassion and personal views. My job today is really to listen to what you have to say." 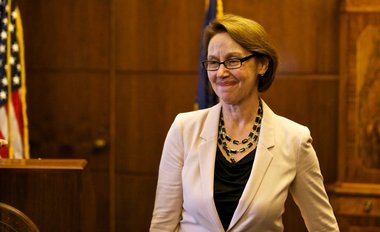