To Tax Pot Or Not, Carbondale Voters Will Decide

The town's electorate will be asked on Nov. 5 to impose a local sales tax on the sale of retail marijuana, which would be added to the town's existing sales tax rate of 3.5 percent.

The Board of Trustees has not yet decided on the size of the proposed tax, although a 5 percent tax rate has been discussed at recent meetings and is expected to come up at an Aug. 20 work session.

A resolution was approved by the trustees on July 23 to alert Garfield County Clerk and Recorder Jean Alberico that Carbondale plans to have a question on the Nov. 5 general election ballot, and to share in the cost of the combined general election in the county.

That resolution puts the town of Carbondale in line with a number of nearby towns and counties that have agreed to allow recreational marijuana shops to operate in their jurisdictions, but out of step with others that have voted to ban the retail shops.

What has yet to be decided, said Trustee Pam Zentmyer, is whether the question to the voters will ask about just a sales tax, or about two separate tax rates – a sales tax and a wholesale sales tax that would be at a higher rate than the regular sales tax.

The idea of the wholesale tax, she said, was to keep wholesale production to a low level.

"For me, personally, it kind of jibes, because I want to keep our wholesale production as low as we can," Zentmyer said, explaining that she wants to prevent Carbondale from becoming a wholesale cultivation and distribution center shipping pot to other parts of the state.

Besides any local taxing questions, voters statewide will be asked to impose a state wholesale excise tax of 15 percent on cultivated pot, which will be earmarked for school construction, and a special 10 percent sales tax that would be over and above the state's existing 2.9 percent sales tax.

According to the ballot question, 15 percent of the sales tax would be shared with local jurisdictions, to help defray the costs of enforcing and administering the new pot laws.

In addition to the local tax issues, Zentmyer said, there was some talk about capping the number of retail outlets permitted to operate in town. A similar concept was discussed regarding medical marijuana dispensaries in town, of which there were a dozen or more at one time until competition and other considerations trimmed that number down to the three that currently operate.

"I'm not as sold on that [cap on numbers], personally, because we don't treat liquor licenses like that," she said. "And we talked about doing that with medical marijuana, but we didn't do it. So, I'm not for that idea, in the interests of fairness."

In general, Zentmyer said, "I'm kind of a believer in capitalism and free markets. I think we've learned that we're not going to have a huge number of these businesses."

According to a map published in the Denver Post on July 26, six towns in the central Colorado Rockies have agreed to allow recreational pot shops to operate within the town limits – Frisco, Eagle, Glenwood Springs, Carbondale, Aspen and Leadville.

Other towns in the same region have either not made a decision, imposed a temporary moratorium on the businesses, or banned them outright.

Two counties in the same area, Eagle and Park, also have agreed to permit the businesses to operate within their jurisdictions, according to the map, while Garfield, Pitkin, Summit, Chaffee and Lake have not made a decision on the issue yet.

Town Manager Jay Harrington said there are other issues facing the trustees, aside from taxing the nascent industry, such as revisions to the town's law enforcement codes to put Carbondale in line with state law permitting the cultivation, possession and use of pot by persons over 21 years old, as long as it is not in public. 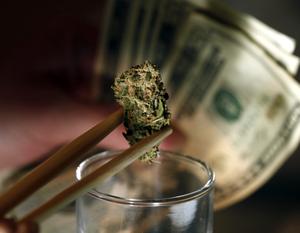