Oregon's legal marijuana business owners are hauling massive amounts of cash into Salem each month to deliver their tax payments. On his latest trip to the Oregon Department of Revenue, dispensary owner Tyson Haworth had company: U.S. Sen. Jeff Merkley.

Haworth, an owner of Oregon's Finest and a marijuana production operation called sofresh Farms, stuffed his tax payment, about $70,000, into a bag and drove south on Interstate 5 with the Democratic senator in the passenger's seat.

"And so this is crazy," Merkley says in the video. "This is from an ancient era. We're taking cash down to Salem because you're legally not to use our banking system."

Marijuana's prohibition under federal law has kept traditional banking generally off-limits to the industry, even in states where it's legal.

Haworth tells the senator how he can't get a credit card processing system at his two Portland stores. The company has gone through four bank accounts; each were closed once the bank realized the nature of the business.

"Do you worry about getting robbed? Here you're traveling down the road with this enormous pile of money in a backpack," Merkley says in the video.

"Yeah, it's one of the few things that keeps me up at night," Haworth says. "You lose sleep over how we're going to protect our employees."

The video, paid for by Oregon's Finest and produced by Crimson & Clover Media, opens with Haworth standing alongside Merkley and U.S. Rep. Earl Blumenaur, D-Oregon. Haworth said the company approached the politicians to appear in the video and both readily agreed.

The Revenue Department has asked for additional staff to help handle the influx of cash payments. One official told lawmakers in May that the agency has received individual cash payments as large as $90,000. 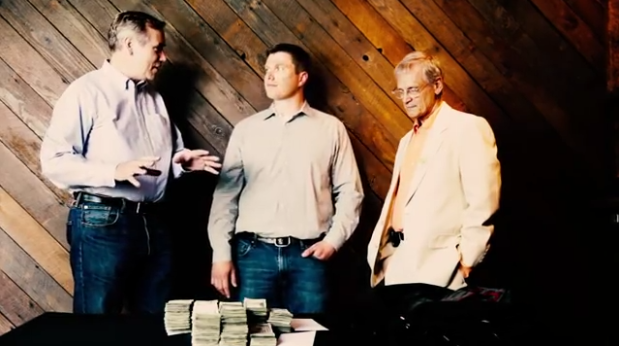