the heavy weight runoff was 6.something i think I cant remember for the life of me cause I checked it as I was running out the door for work.
how soon do you think I should start seeing a change for the better in her ?

heres some pics i took this morning 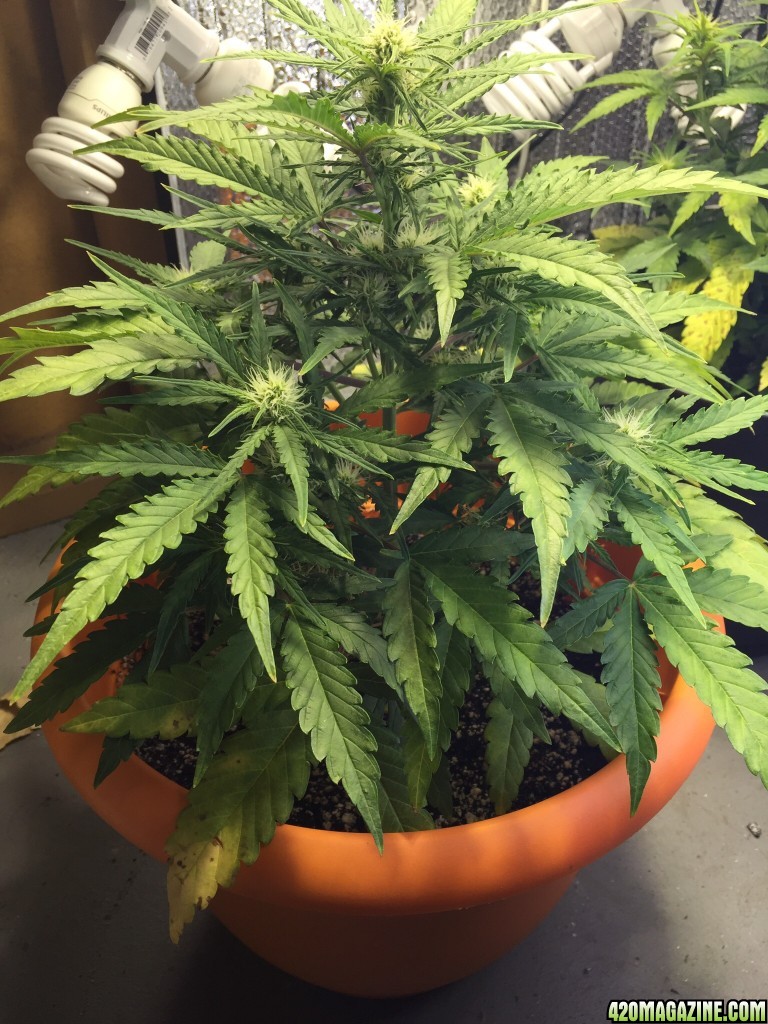 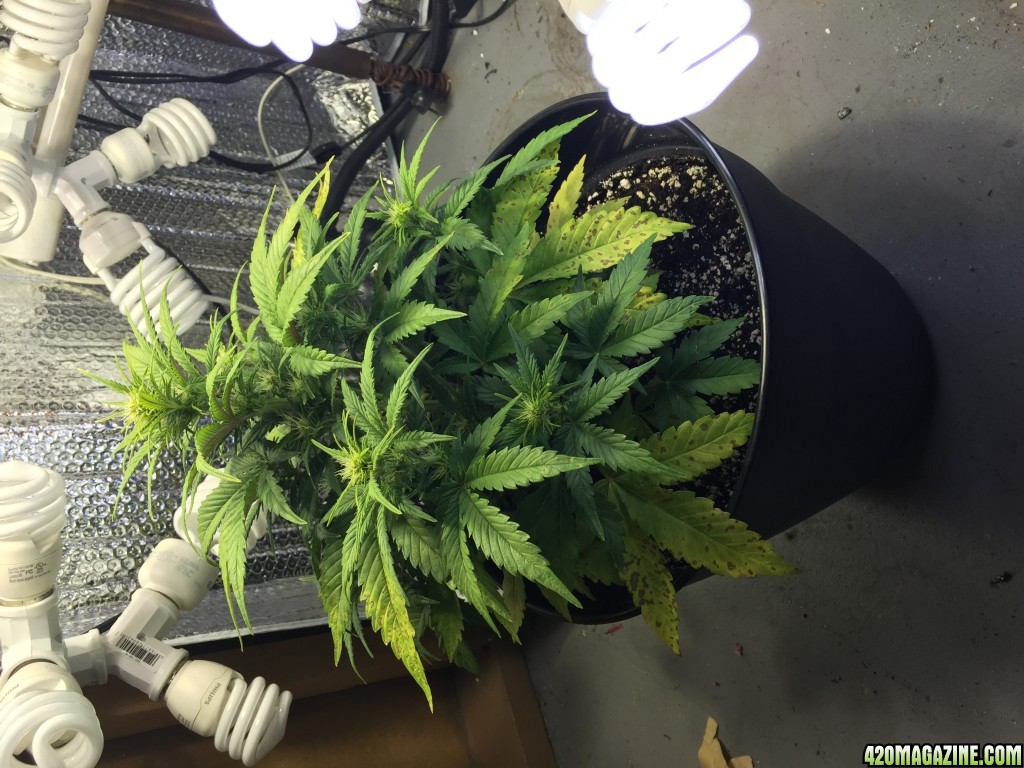 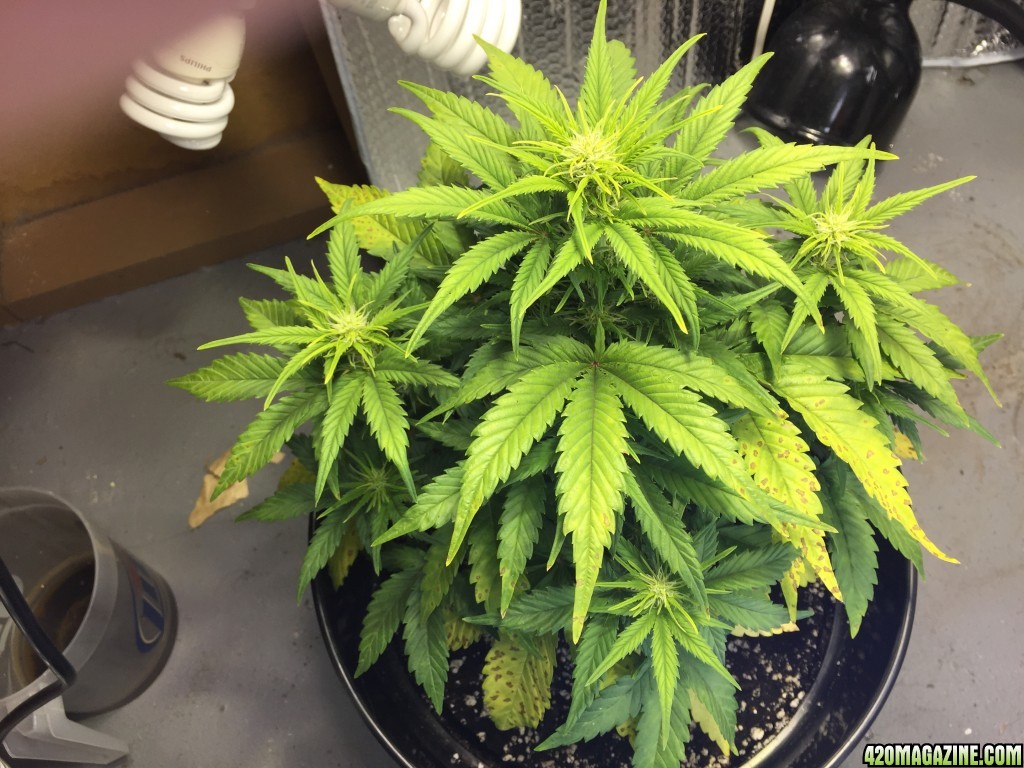 . Remember. You won't see the yellow go away. Look at the new growth. You don't want to see new yellow. I would probably give her a week or so to sort herself out. At that point, you could trim some of the yellow leaves if you like. I find it is easier to see if any of the new growth has a problem if I get rid of some of the old growth.

I would not give any more nutes for now. You can water with PHed water if she needs it, but I would let her dry out pretty well first (3 or 4 days at least.) Then start with 1/4 strength nutes. I flushed by Blueberry Kush about 2 weeks ago and have not "fed" her yet. Just water. I will probably give her a light feeding next watering.

I'll agree with everything supergroomer said! The bad part is that since you're a few weeks into flowering, you probably won't have a ton of new growth be able to notice improvement, so you just have to make sure she doesn't look worse! You can probably eyeball it and compare to these pictures if you need to.
JoJo's SOG 'n SCROG - LED - C99/Northern Lights/NL99 (In Process)

Ok so today i went and bought one of these rapitest ph soil tester where you put the soil in and the water and the pill and shake it.
I took a soil sample from the side but from 4 to 5 inches deep. It read at 7.0 - 7.5 so i am going to try adding some espoma soil acidifier and see what that does for me when i feed her tomorrow hope fully it will get me to the 6 - 6.5 i want. i also bought some gen hydro cal mag to add to nute cocktail it gets.
2nd GROW 60 Day Lemon Auto and Heavyweight Fast & Vast Auto CFL MH/HPS

Ok so I am gonna keep posting on here cause its the same problem. So the plants are looking bad again heavy weight in the matter of like 2 days is almost completely yellow leaf tips curled up and burnt and some spotting still even on newer growth. Lemon is starting to yellow out on her lower branches pretty bad too. After I did that original flush I waited a few days then fed them a like less than quarter strength maybe like 1/8th strength nutes. So for about a week they were doing ok looking a little better. Than all of a sudden bam. They go to crap. I dont think its possible for me to have burned them with such a small amount of nutes. I am talking in a gallon of water like .5 ml max. I have checked my ph over and over. I even flushed heavy weight again last night with another 8 gallons of water and it ph'd at around 6.8-7.0. I ph'd lemon after a regular watering 6.8 - 7.0. So they cant be getting lockout so WHHYYYY are they both looking like death ?!?!?

I dont have a camera to take pictures at the moment but I will later today and will make sure to post them. So you all can see what I am talking about.

So I am thinking its a potassium defic. the way they are looking the spotting and the yellow to green look from leaf tip in. Also the stems on the leaves are hella reddish purple on every single leaf that's still alive.

I am using pro mix ultimate organic and I recently started giving them cal mag not alot but some within the last week.

Heres the photos I promised 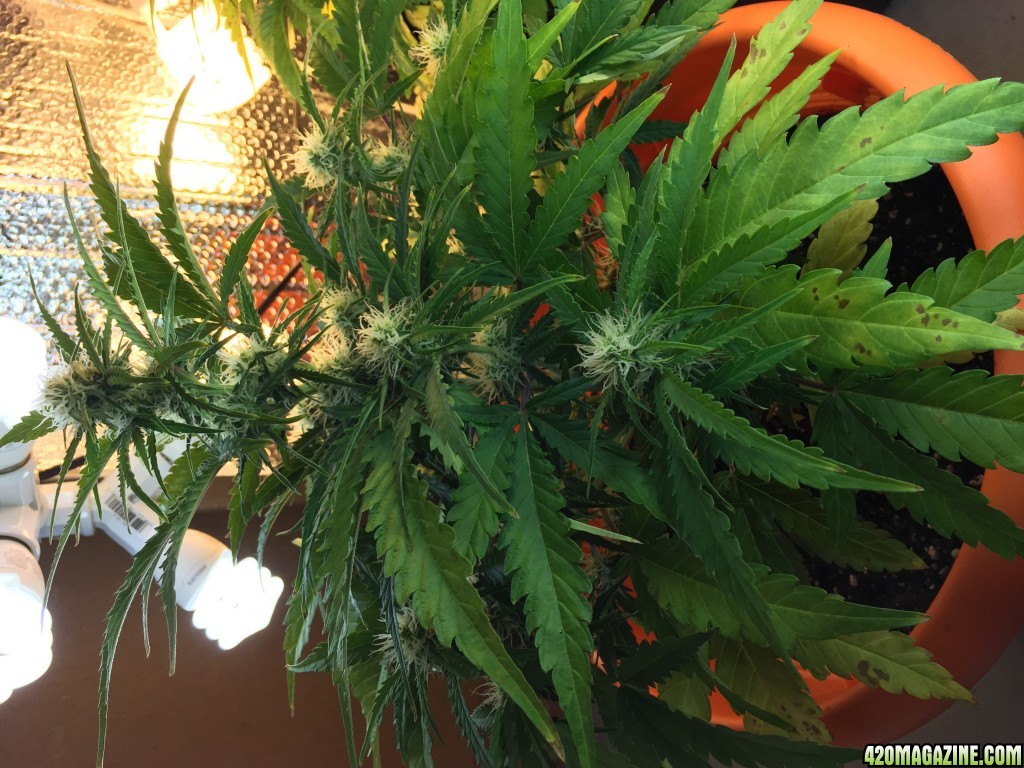 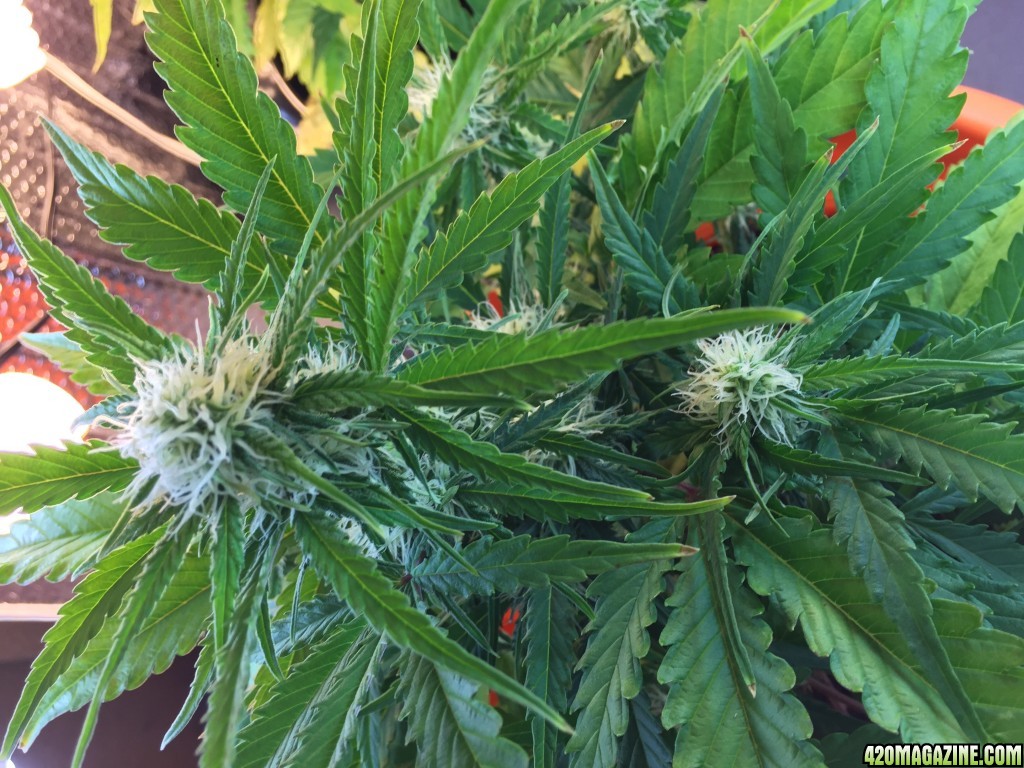 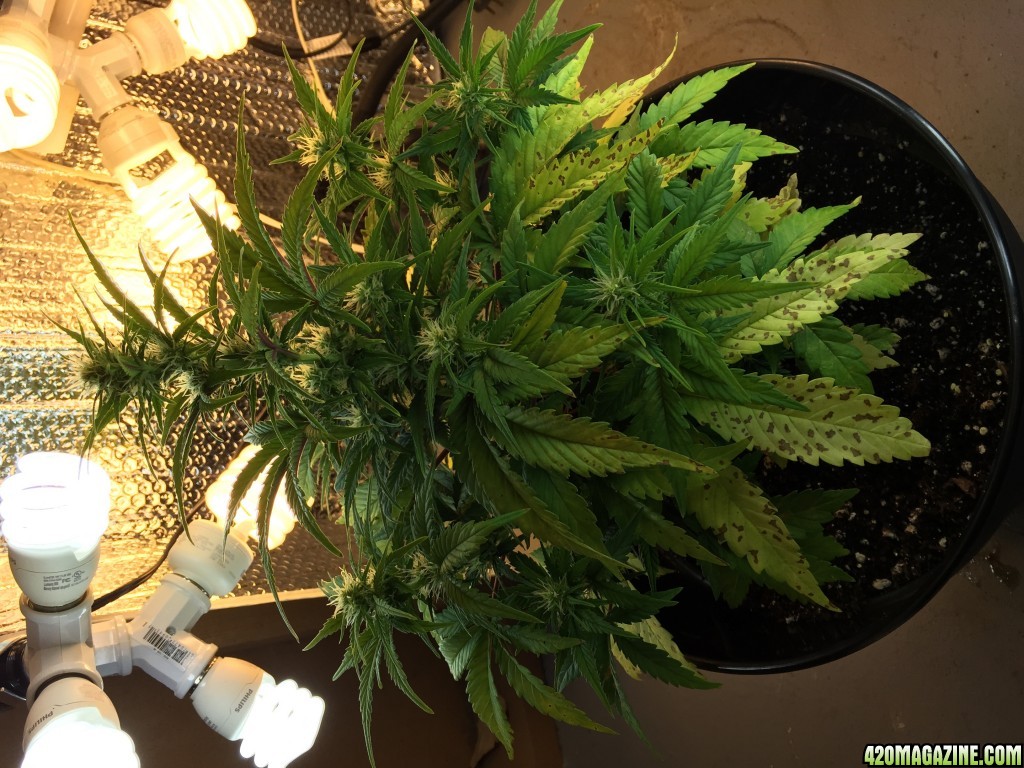 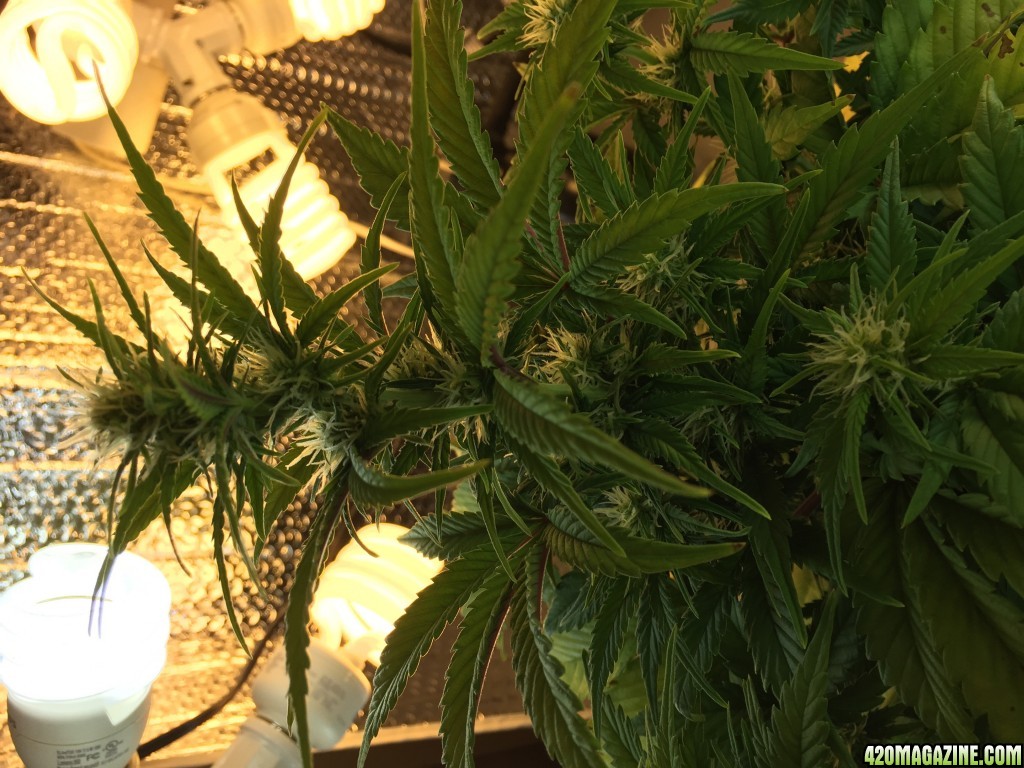 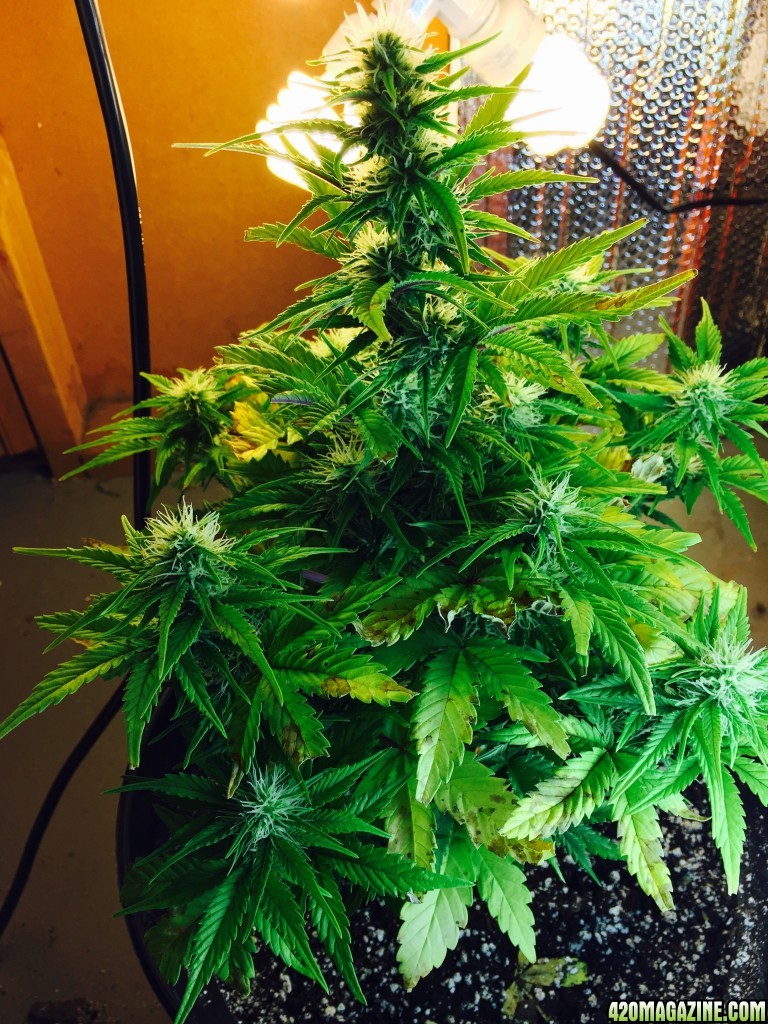 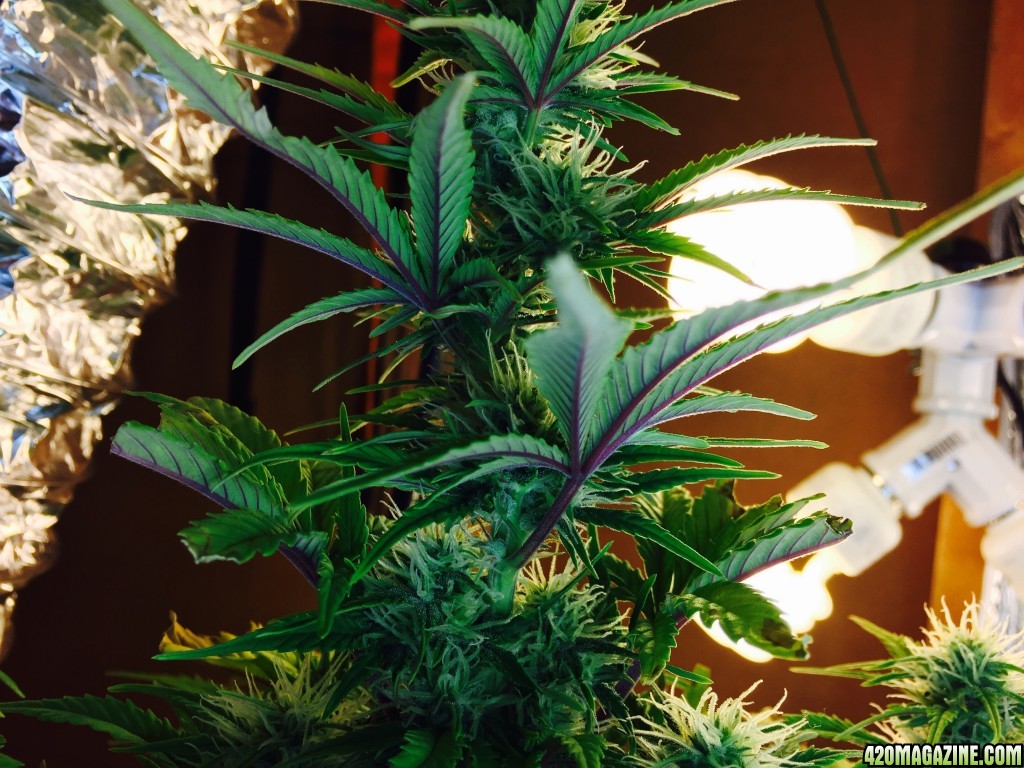 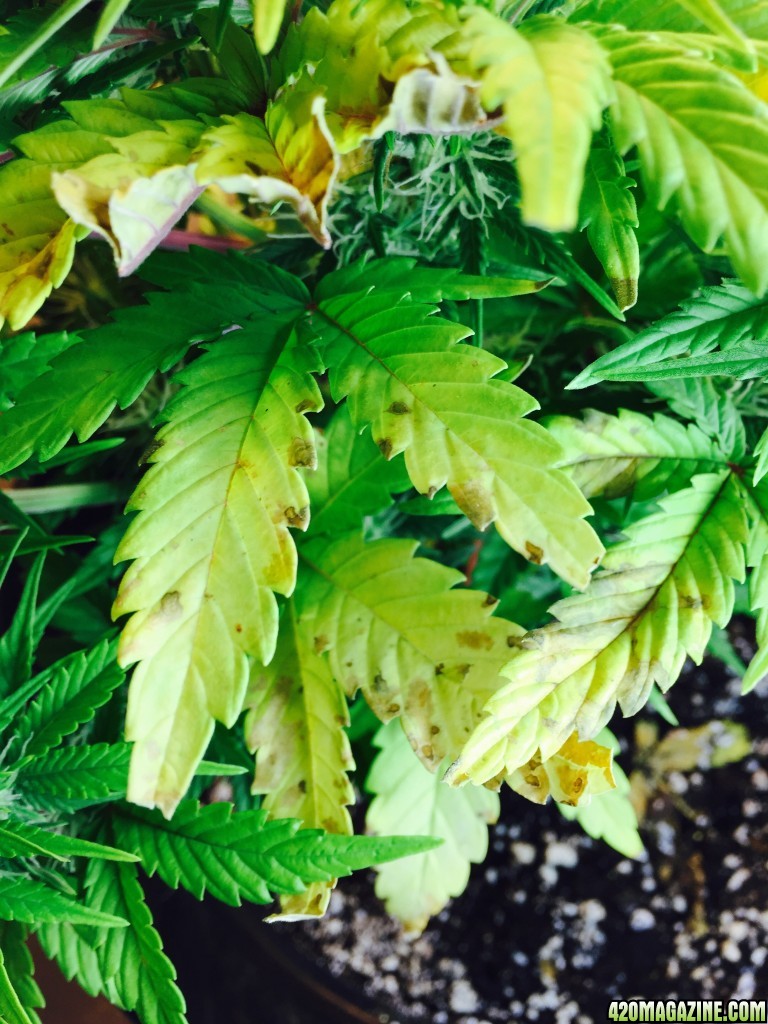 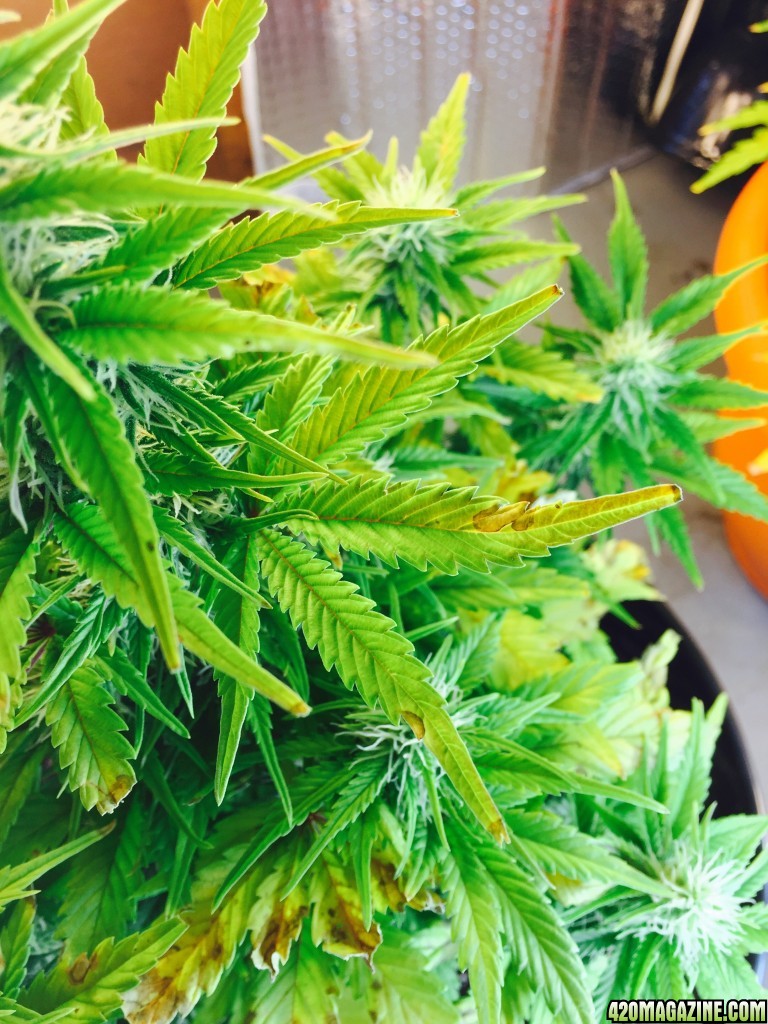 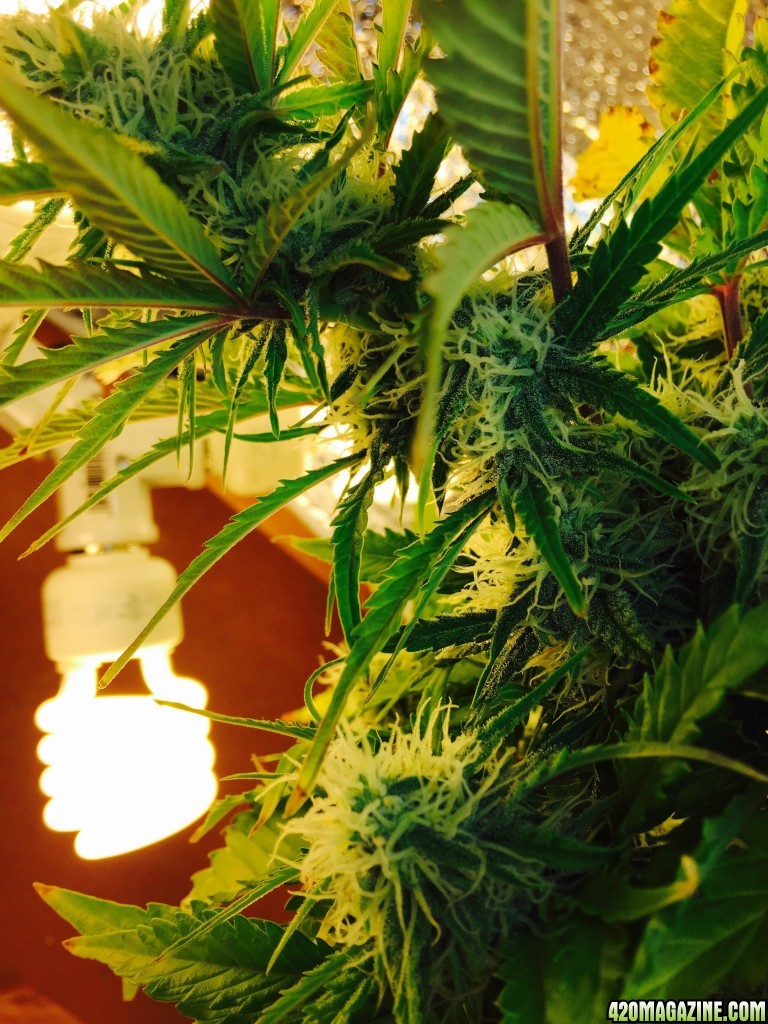 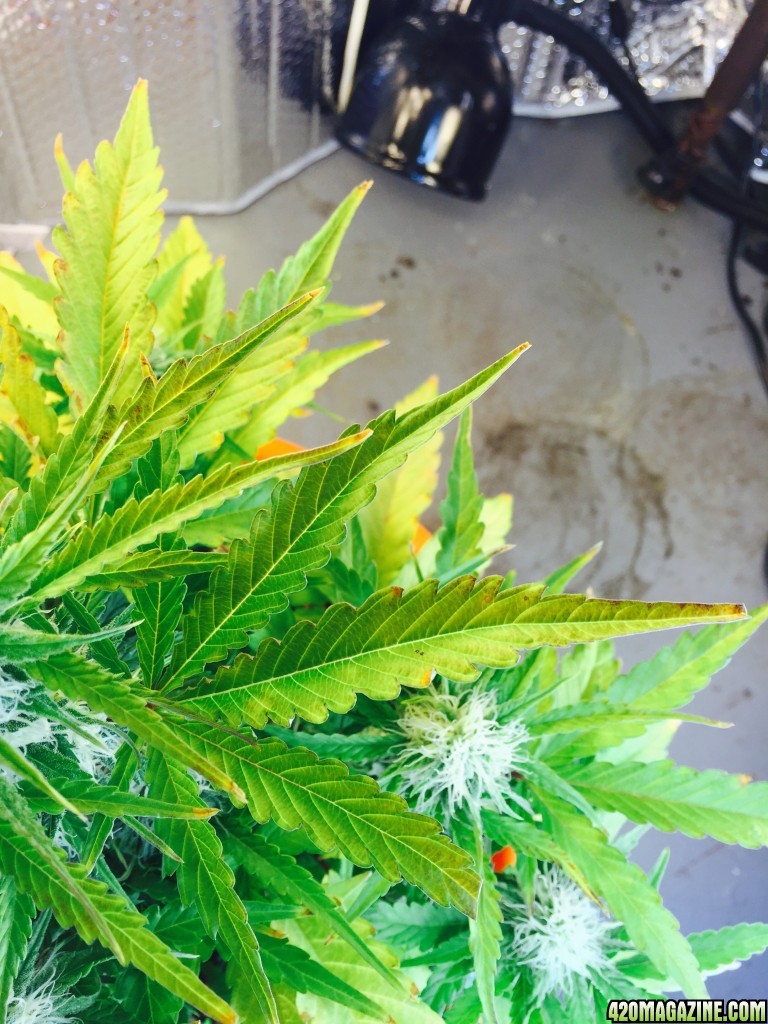 So what does my soil have to do with it ?
2nd GROW 60 Day Lemon Auto and Heavyweight Fast & Vast Auto CFL MH/HPS

Personally, I still think it's a pH issue. I grew in Promix (the standard kind) for my first grow and had similar problems before realizing that it is mostly peat moss & perlite, which is a *soiless* medium. Once I started running closer to the hydro pH range (5.6-6.2, with 5.8 being awesome), pretty much all of my problems disappeared.

So that's my diagnosis! Looks like it may be time to do another flush... Some people in peat moss based mixes have better luck in the 6.1-6.2 pH range, but it sounds like you're still outside of that.

She also looks like you may be feeding her a bit too much, as you have some nute burn on the new growth. Once you're done flushing, you may want to back off the nutes a bit.

Other than that, she's looking pretty good, and like she's getting plenty of light. Good luck, and she'll reward you if you stay on top of your issues like you have been!
JoJo's SOG 'n SCROG - LED - C99/Northern Lights/NL99 (In Process)

I might try that trying to get my ph lower...

and I am going to try to flush lemon for a second time already did heavy weight.

With the nutes I only been feeding like less than a quarter strength ever since it started happening the leaf tips burning started at the same time all these other problems did. Since the orginal flush I have only fed once.
2nd GROW 60 Day Lemon Auto and Heavyweight Fast & Vast Auto CFL MH/HPS
2

A
Problem in Flowering