Tulare County Sheriff's deputies and U.S. Forest agents are in the midst of marijuana season.

While voters approved the legalization of marijuana, the law comes with limitations. Tulare County Sheriff Mike Boudreaux said that the department has seen an uptick in mountain grows this year.

During surveillance flights, sheriff's detectives found three different properties in the Badger area that were growing marijuana on a large scale.

Combined, more than 34,000 marijuana plants were uprooted and destroyed. The street value – $102 million.

During the raid near California Hit Springs on Tuesday, 25,813 marijuana plants were located and destroyed. It's among the larger sites confiscated this year.

Detectives also found chemicals and trash at the campsite where growers had been living. Growers had also diverted water from rivers and streams.

Marijuana grow sites found on forest land are often connected to gang crime, U.S. Forest officials said. The money typically goes back into gangs, which are run from prisons.

Grow sites have also been linked to massive Mexican cartels, which shuffle drugs across the world.

A pound of marijuana sells for roughly $3,000 in California. However, the plants could be worth more in states where recreational use remains illegal.

In the last 14 years, nearly 300,000 plants with a value of almost $850 million have been eradicated in Sequoia and Kings Canyon national parks. 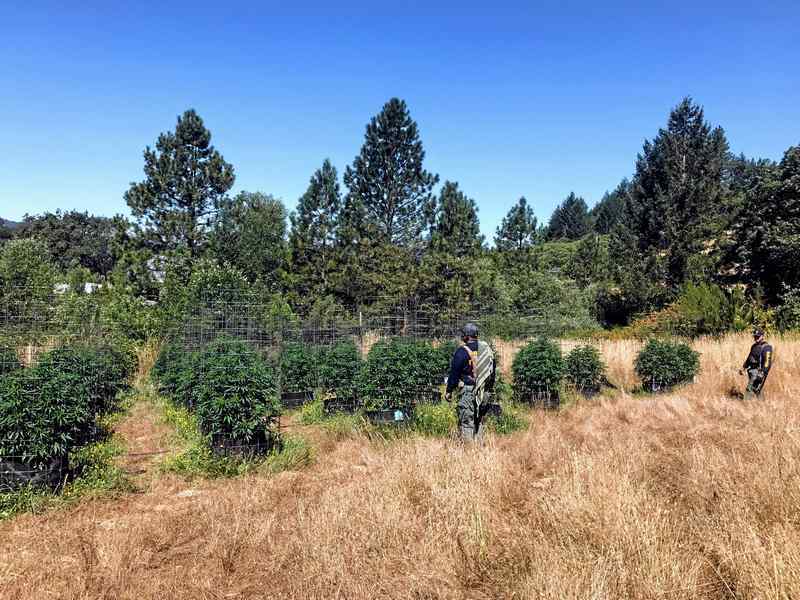 The wholesale price for outdoor grown marijuana in California is a little over $1,000 a pound according to experts that track sales. Me thinks that Tulare County is padding their figures a bit.