At this point, it's hard to be surprised by any ingredient in a cocktail made by a creative mixologist. Duck fat? It's been done. Peanut butter? Why not. Charcoal? Absolutely. Every veggie in the garden? Old hat. So it only makes sense that these bartending Picassos have to dig ever deeper to find additives that will not just stand out but add that something extra-special to their Instagram-worthy concoctions.

It's not shocking that Gracias Madre–the Mexican-themed cousin of L.A.'s cultish plant-based CafÃ© Gratitude chain–made digital waves last year when introducing CBD-infused cocktails, which don't exactly not taste of marijuana. By now, many people are familiar with CBD (also known as cannabidiol), the trendy part of cannabis or hemp that's being increasingly touted for medical use as an anti-inflammatory, pain-easing mood elevator said to not elicit a true high, since it has lower levels of THC (the psychoactive portion of the plant that largely comes from the flower). The herbal supplement brand Torii Labs has even been mixing its CBD-laced Re-Leaf tonic with Gem & Bolt's mezcal distilled with damiana (a heart-opening medicinal shrub), lemon, honey, and ginger for the High Frequency, designed to connect the heart and mind and leave the drinker with lingering positive energy.

At this point, CBD is relatively old news, and it's all about terpenes, a term wellness junkies and the rest of the world may soon begin hearing more of, especially if Los Angeles's Prank bar has any say in the matter. One thing to note: CBD is generally only allowed where medical or recreational marijuana is legal, while terpenes are legal in the U.S. You can think of terpenes as similar to the flavonoids inside any plant–they are in everything from lavender to basil to cannabis and help give something its flavor, whether it's in a certain strain of weed or a sprig of rosemary. The reason the rise of these incredibly refined terpenes is so exciting, says Prank co-owner and veteran L.A. barman Dave Whitton, is they have hefty health benefits alongside interesting flavor profiles.

Terpenes from cannabis have some of the strongest anti-inflammatory properties of any plant, according to proponents, and a good number of doctors are now studying their effects and benefits in replacing opioids. "When you toss in CBD, you're getting the different terpenes but not really distinctive ones," says Whitton. "Once you dive in and distill it down, you clean out the terpene itself and keep cleaning it and cleaning it using CO2 extraction until you get this very distinct strain line that's an oil."

A few of the more than 140 identified thus far include limonene, a pungent citrus-oriented terpene, which, in addition to the mighty anti-inflammatory benefits they are all said to carry, is credited as being stress relieving, mood elevating, relaxing, antibacterial, antifungal, anticarcinogenic, and has been used to treat acid reflux and gallstones. At Prank, which opened earlier this year as L.A'.s first walk-up bar (the airy neighborhood-friendly industrial space features vibrant tile work and a display case of terpene chocolates, kombucha, and CBD lotions, among other related products), it's the softly acidic note that rounds out the bright and boozy Mon FrÃ©re, which combines Plymouth gin with Cocchi Americano and orange bitters. "You're taking a depressant, alcohol, and putting in a mood lifter," says Whitton, "so hopefully it evens things out a little bit. That's why we like using it in cocktails."

All it takes is a drop or two to have an effect on the person and the flavor. Limonene also features in the instantly addictive Fizziotics House Original Kombucha. It's fermented into the health beverage in-house, along with flavors of mango, peach, coconut, and ginger. (Another called Crossfizz, with pomegranate and ginger, is new this month.) The piney-tasting pinene terpene–said to be a bronchodilator good for those with asthma that can be used as an expectorant and to increase alertness–also factors into that brew.

Another key terpene for Prank is myrcene, with a distinct clove scent and flavor and a higher viscosity than the others. "It's more of a sedative effect, a muscle relaxer," says Whitton, adding it's also a great sleep aid. In the Blue Hilaria, with root honey, citrus, Johnnie Walker Black Label, and a floater of Johnnie Walker Blue Label, it's evident from the first sip–no straw comes in the glass, so the drinker tastes the myrcene and top-shelf booze lingering on the surface. A new kombucha with this terpene is in the works, too: "Ten minutes into drinking a Calmbucha, if you're cognizant, you'll start to notice you're a little more relaxed. Your shoulders will move down, you'll feel a little bit better," says Whitton.

While it's by no means advised to drink terpene cocktails on the daily, Whitton says the potent wonder ingredient is something that should be taken regularly for optimal results: "If you do, the less inflammation you'll have and the better you're going to feel, especially the seventh day compared to the first." But come fall, drinkers at Prank will be privy to even more of these finely crafted cocktails, especially with the seasonally appropriate pinene and myrcene, which Whitton is excited to pair with pumpkin and ginger. And next year, some of the organic and healthy yet totally delicious dishes may be served with dressings or sauces infused with the oils, too. "We have about 15 more terpenes we're playing with," Whitton says, "but we want to be able to talk about them intelligently, so people understand the benefits to the body." 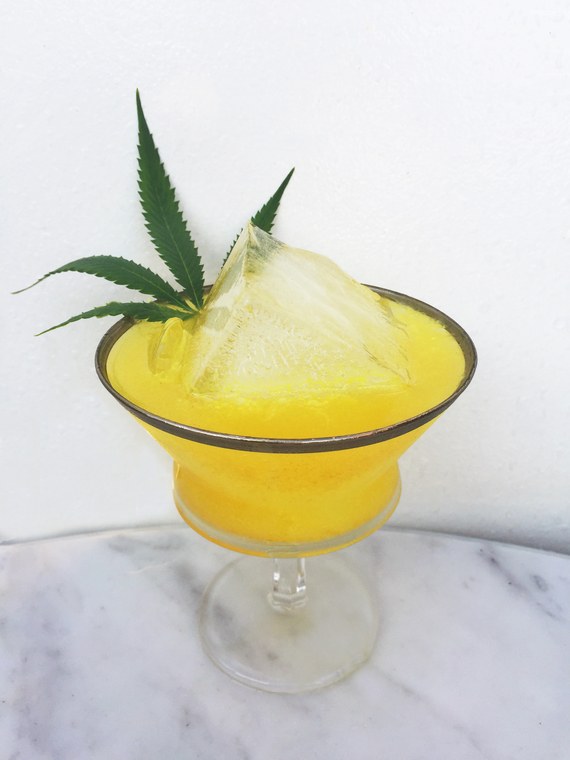