Terpenes: The Powerful Organic Compounds In Cannabis You Don't Know About

The unmistakable scent of fresh cannabis can provide an intoxicating aromatic experience, but from one variety to the next, smell and flavor can vary greatly, thanks to powerful compounds known as terpenes.

You might not be familiar with the term, but you've definitely been around terpenes before: This diverse class of organic compounds is found in a variety of plants, and is responsible for giving things like pine trees, citrus fruits, and lavender their distinct smells.

Think about the odor of a dank U.K. Cheese variety, and then try to imagine it next to tropical notes of Lemon Haze. That difference? It's terpenes at work.

Understanding the important healing properties that terpenes can provide is crucial in knowing just how a variety of cannabis can affect the body, especially when used in conjunction with cannabinoids like tetrahydrocannabinol (THC) and cannabidiol (CBD).

While there has been a proliferation of THC- and CBD-only products hitting the both the legal and grey markets in Canada, research has shown that when terpenes and cannabinoids work in conjunction–that is, when all the compounds of the plant are being used–cannabis is at its most effective. (Industry pros sometimes refer to this synergy among compounds as 'the entourage effect').

Factors like climate, weather, age, maturity, and soil all influence the way a plant develops terpenes, so even among the same cultivars, terpenes can present themselves in very different ways. (As such, take our recommendations below with a grain of salt, and just follow your nose).

Pinene is the most commonly found terpene in the world, and is responsible for the smell you might associate with pine needles or rosemary. It actually has two isomers, alpha- and beta-pinene. Alpha-pinene is more common in cannabis. (Beta-pinene is more reminiscent of dill, basil, and hops.)

A-pinene is anti-cancerous, anti-bacterial, anti-inflammatory, and also promotes brain function and improved respiration. Pinene can also counteract the negative effects of THC that some users might experience, like anxiety or short-term memory loss.

Commonly found in flowers and spices including lavender and coriander, linalool provides a sweet, floral scent that is often found in aromatherapy products formulated for stress relief.

Varieties of cannabis that are often high in linalool include Amnesia Haze, G-13, and Granddaddy Purple, among others.

While this terpene is anti-cancerous, anti-inflammatory, anti-epileptic, and analgesic, it's biggest draw is relief from stress, anxiety, and depression. Linalool can also serve as a sedative, and supports brain function.

While pinene might be the most common terpene in the world, myrcene is the most commonly found terpene in cannabis, sometimes composing up to 50 percent of a cannabis plant's terpene volume. It produces an earthy, spicy, clove-like odor that can have tropical or citrus notes. (It's also found in huge quantities in mangos.)

Find it in cultivars like Himalayan Gold, White Widow, and AK-47.

Myrcene is often referred to as the "couch-lock" terpene, for its intense sedative effects. This anti-oxidant, anti-carcinogenic terpene is also good for brain function, pain relief, stress, and insomnia.

Here's an urban legend you may have already heard about, but it holds some merit: Next time you plan to consume cannabis, eat a mango about 45 minutes ahead of time. Mangos are incredibly high in myrcene, which can help THC molecules reach specialized receptors in the body's endocannabinoid system, enhancing the psychoactivity and euphoria of your high. 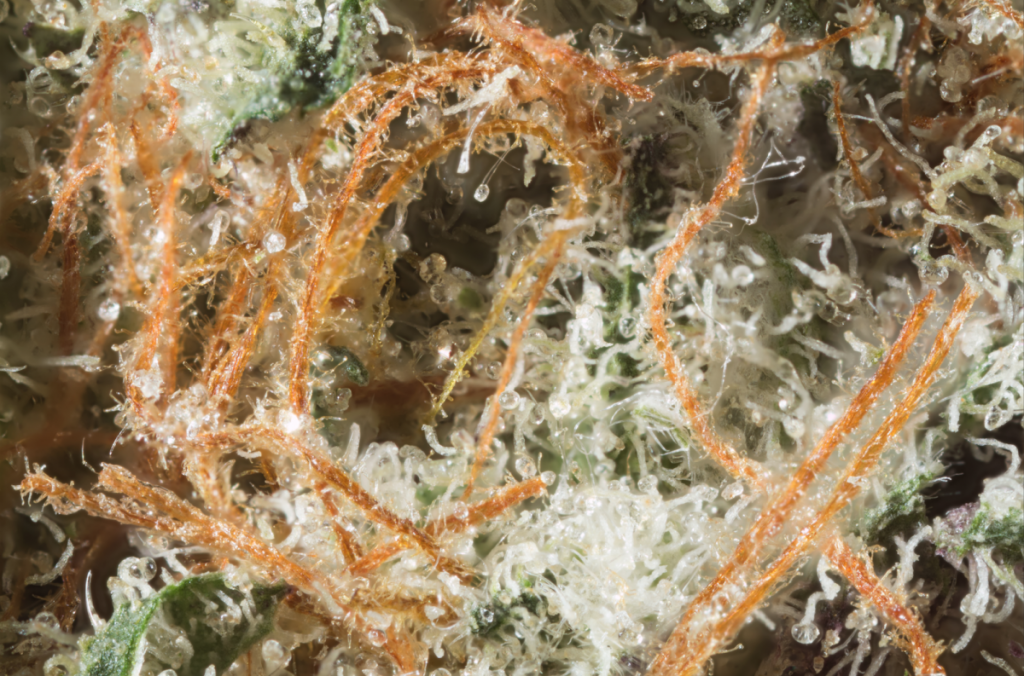 K
Why Does Cannabis Smell?

Terpenes: How The Synergy Of Compounds In Cannabis Creates The Entourage Effect