Boisean Lindsey Rinehart was diagnosed with an aggressive form of multiple sclerosis five years ago. The drugs that the 29-year-old mom was prescribed to slow the effects of the disease cost tens of thousands of dollars each year.

Reinhart would prefer to use marijuana – and would like to grow it herself. She says studies and anecdotal evidence indicate pot helps MS patients with spasms and tremors. "I could slow my disease's progression in a natural way," she said. "A lot of patients find if they eat cannabis, they feel better and they can get off other medications."

Pot is illegal in Idaho. But Rinehart is hoping to change that, working on an initiative campaign to ask Idaho voters to make medical marijuana legal.

But others aren't waiting for Idaho law to change. Some are obtaining medical marijuana cards – 163 Idahoans have obtained the Oregon cards – and others are opting to move to Oregon.

Serra Frank, a Boise native who moved last year to Portland after nine years of battling pain associated with a bladder condition, said she's met a lot of "Idaho refugees" in Portland.

Frank is the 29-year-old founder of the advocacy group Moms for Marijuana International, but she left because she feared getting caught with the one drug that she says has helped her become a productive adult and parent. Now she obtains marijuana in various forms, including capsules, from registered growers who make their product available at clubs or co-ops around Oregon.

One of those co-ops – the 45th Parallel – opened last spring in Ontario, about an hour east of Boise. William Esbensen, formerly of Boise, was one of the co-op's organizers.

The co-op is a place where patients meet growers and pick up marijuana, which they refer to as "medicine." Some patients grow their own and share the extra with fellow patients. Under Oregon law, farmers can't sell it for profit, but can receive compensation for their growing costs.

"Nobody on this side of the state was helping out these patients," said Esbensen, who didn't want to discuss the illness he suffers.

Esbensen doesn't encourage Idaho doctors to send their patients to the Ontario co-op. "I tell them it's illegal in Idaho," he said. "Personally, I would never take cannabis into Idaho ... the penalties are really harsh."

Get caught with 3 ounces or less and you could be charged with a misdemeanor and face a fine of up to $1,000 and up to a year in jail. More than that is a felony, and so is cultivation. A conviction for felony possession brings up to five years in jail and a $10,000 fine.

HOW TO GET A CARD

As of January, 57,386 patients and 29,504 caregivers had cards, according to state statistics. Physicians determine whether patients have one of the qualifying conditions for a card, which include severe pain (the most common), agitation related to Alzheimer's, cachexia, cancer, glaucoma, HIV/AIDS and persistent muscle spasms.

The 45th Parallel flies in a doctor from Portland every four to six weeks, seeing patients in a nondescript office in an Ontario strip mall.

The average age of co-op members is about 57, Esbensen said. He did not know how many of the 163 card-holders from Idaho are part of 45th Parallel.

A clinic volunteer named Tricia, who asked that her last name not be used, helps clinic patients with paperwork and information. The 35-year-old used to live in Nampa.

Many patients do not want to smoke their medicine, she said. She makes an elixir with Vitamin E, flaxseed oil, echinacea, honey and marijuana. She puts a dropperful in her tea most mornings to help with her ulcer-related stomach pain and migraines.

"I was tired of other medications and I couldn't afford it," she said.

The 45th Parallel operates its co-op about a mile away from the clinic, just outside city limits. It's in a one-story building, an old butcher shop, on Highway 201. Behind the mirror-windowed building is a greenhouse, Esbensen said.

Volunteers at the private nonprofit co-op greeted a reporter and photographer in the parking lot last week. They say they do not allow anyone in without a valid Oregon medical marijuana card, and they now store their marijuana out of sight.

"We're just not going to let anyone come in and sensationalize our product, the medicine," said Esbensen.

PART OF THE COMMUNITY

The clinic joined the Ontario Chamber of Commerce, causing a stir with the group's existing 340 members, said John Breidenbach, CEO/president of the chamber. Medical marijuana proponents held a town hall meeting last fall, but have since flown under the radar, he said.

Ontario is a city of about 11,300. Major employers in the area include Oregon's largest prison, the 3,000-bed Snake River Correctional Institution, and a Heinz Ore-Ida food-production facility.

Breidenbach said he hasn't heard of any measureable economic impact from co-op and clinic visitors.

"I can honestly say I haven't heard of any negative or positive effects," he said.

Malheur County Sheriff Brian E. Wolfe said there haven't been any serious issues with the co-op, other than neighbors occasionally complaining about parking.

But in general, law enforcement officials in Oregon and Idaho say they worry about medical marijuana serving as a front for the illegal drug trade, or a way for legitimate cardholders to make extra cash by selling it on the black market.

The 45th Parallel limits patients to no more than 1 ounce per week. That means a person from out of the state wouldn't be able to stock up with a large amount then return home.

Oregon law allows holders of medical marijuana cards to possess up to 1.5 pounds of dried pot and to grow up to six mature plants and up to 18 starts/seedlings. But some motorists on Interstate 84 in Idaho have had a lot more than that, according to Idaho State Police.

In January, Justin Brownrigg, a Eugene man, was arrested in Canyon County on charges of possessing nearly 69 pounds of marijuana. He told police he has an Oregon medical marijuana card, which Idaho does not recognize.

That was one of 16 cases of suspected marijuana drug-trafficking investigated by Idaho State Police in Southwest Idaho in the past six months, ISP Captain Steve Richardson said. All of the cases involved vehicles traveling into Idaho from California, Oregon and Washington – all states with medical marijuana laws.

That sentiment may have something to do with the science, though it's still debated. Researchers have confirmed that the cannabis plant contains active ingredients with "therapeutic potential" for relieving pain, controlling nausea, stimulating appetite and decreasing ocular pressure, according to the National Institutes of Health.

Sixteen states and the District of Columbia have medicinal marijuana laws. Bills have been introduced in West Virginia, Wisconsin and Idaho this year.

This is the second year Rep. Tom Trail, R-Moscow, has introduced an Idaho medical marijuana bill, but it's not expected to go anywhere.

The group Compassionate Idaho is collecting signatures for a ballot initiative. Rinehart said volunteers have gathered a little more than 2,000 verified signatures so far; they need 47,000 by April to get on the November ballot.

"I will never give up until we have safe, legal access in this state," Rinehart said. "I'm not moving away. I'm not going away. If this fails, we will simply reintroduce it."

The 45th Parallel medicinal marijuana co-op opened just outside of the Ontario city limits last year. Officials there say they don't know how many Idahoans are among their clients 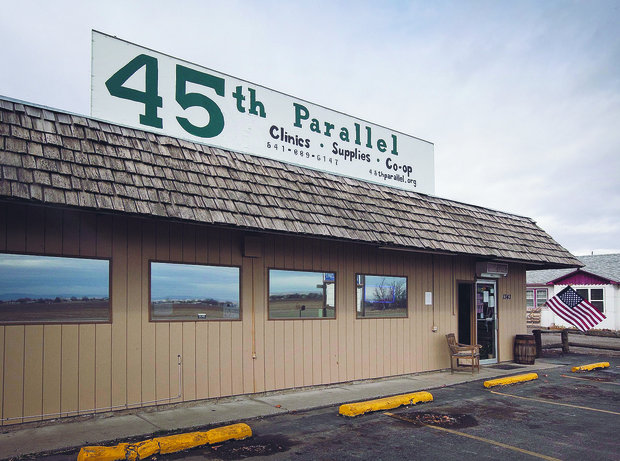