A late afternoon traffic stop Sunday by Department of Public Safety (DPS) state troopers netted over two tons of bundled marijuana and a first degree felony charge for a Florida man. A trooper made the stop at 3:50 p.m. at the 171 eastbound mile marker. The 2003 Freightliner Century Classic truck tractor, with a 1998 WABA trailer, was stopped for a traffic violation.

The driver, Giovanni Borrero, 30, of Longwood, Florida, showed signs of nervousness as well as indicators of criminal activity which were observed by the state trooper, according to the DPS report.

Consent to search was requested and verbal consent was given. The vehicle was then moved to the Wal-Mart parking lot in Mount Pleasant for easier access to off-load the trailer.

The search revealed 184 bundles of marijuana weighing 4,605 lbs., according to the DPS, mixed in with the load of produce that included jalapeno peppers, cilantro and cactus.

Borrero is being held at the Titus County jail where he was charged with Possession. of Marijuana over 2000 lbs., a First Degree Felony.

Big Tex Trailer of Mount Pleasant donated the use of one their trucks and trailer to transport the marijuana to the DPS Lab in Tyler. 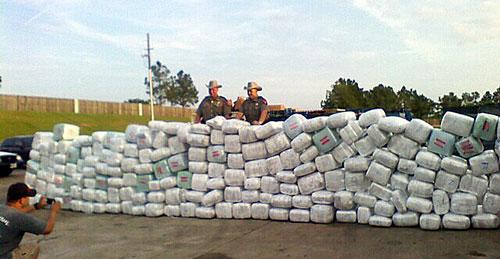 Looking like the Great Wall of China, DPS troopers pose behind a wall of bundled marijuana that was offloaded in the Walmart parking lot late Sunday.​

sounds like the fix was in. This guy didn't make the right payoffs and was sacrificed so the DEA could look like it's earning its' budget
Foliar Feeding https://www.420magazine.com/forums/...ws/130753-dm-liquid-light-saturator-leds.html

Turbo Charge Your Grow with High Pressure Aero to https://www.420magazine.com/forums/journals-progress/130393-high-pressure-aeroponics.html

yaaa for real dude. some people are so stupiddd. probably crappy mexican shit anyway seeing how its bundl

PetFlora said:
sounds like the fix was in. This guy didn't make the right payoffs and was sacrificed so the DEA could look like it's earning its' budget
Click to expand...


Plausible no doubt, but if that were the case then the gentlemen in the photo would likely be wearing different uniforms.

With all the rivalries in law enforcement I don't see them handing a bust like this off to the local super troopers.

Cops: Trucker Caught Will 700 lbs Of Weed In Hopkins County

AZ: More Than A Ton Of Marijuana Found In Van Stopped By DPS Near Tucson