Jimmy Montgomery - Victim Of The War Against Cannabis 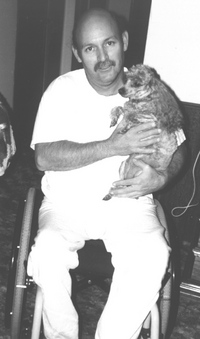 ​
Confined to a wheelchair for more than two years because of an injury, paraplegic Jimmy Montgomery used marijuana to stimulate his appetite and to control the muscle spasms typical of spinal cord injuries.

Montgomery was arrested for possession with intent to distribute two ounces of marijuana — his personal medical supply, which had been found in the back of his wheelchair. Police then attempted to seize his home; because it belonged to his 62-year-old mother, Thelma Farris, she was also charged in connection with his marijuana offense.

In court, the only evidence of any intent to distribute was the testimony of a sheriff's deputy who claimed he had never seen anyone with two ounces who was not a major dealer. The deputy was later convicted on three counts of embezzlement of seized drug property and money.

Additional damning testimony came from an acquaintance whose own sentence for a coc*ine conviction was reduced in exchange for the statement against Montgomery.

Montgomery's mother testified that doctors recommended marijuana to her son to relieve his severe muscle spasms. "When Jimmy smoked marijuana, he didn't have to stay belted to his chair," she reported.

Montgomery was eventually found guilty and given a life sentence, which was later reduced to 10 years. After a year in prison, Montgomery nearly died twice after receiving inadequate medical treatment. He was later released on an appeals bond in 1993.

In April 1995, Montgomery was re-imprisoned. Rather than allow him to use medical marijuana, the government provided muscle relaxants, opiates, and tranquilizers. He was frequently placed in solitary confinement and handcuffed to a prison bed without adequate medical treatment for the antibiotic-resistant infections in his lower body. Friends watched his condition deteriorate as a prosecutor blocked his release.

After considerable public pressure, Montgomery was released on medical parole on July 27, 1995. He later lost a leg from an ulcerated bed sore he developed in prison.
420 Magazine - Your Best Choice For Cannabis News

oh my god. this is just terrible what the gov. has come too. I am discusted to read this. It seems the police will say just about ANYTHING to get a conviction, and look at the man, hes not a dealer! He needs that medicine to help him live and be happy.
"I believe that the truth will set us free, and that truth is contagious. And i think that while cannabis per say is non addictive learning about it quickly becomes." - Todd McCormick

Another Victim of Justice: Jimmy Montgomery

Matthew Ducheneaux - Victim Of The War Against Cannabis

James Burton - Victim Of The War Against Cannabis

Don Nord - Victim Of The War Against Cannabis

Clayton Helriggle - Victim Of The War Against Cannabis