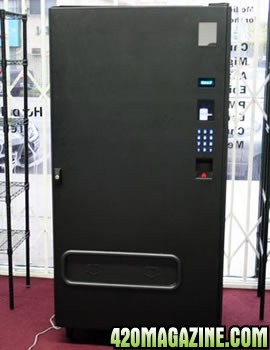 posted Thursday, 24 January 2008
Holy crap, what country is LA in? I mean, last time I was there I was surprised enough at the billboards offering medicinal marijuana cards, but this is insane. Starting on Monday, people who have medical conditions such as glaucoma, cancer, and the deadly not-stoned-enough virus can start getting their fat buds from special "AVMs."
These electronic drug dealers won't be out on the street next to a Pepsi machine, of course. No, they'll be "housed in standalone rooms, abutting two dispensaries and protected by round-the-clock security guards." To use them, you'll need to go with a prescription in hand, get fingerprinted and get a prepaid credit card that's loaded up with your dosage and what strain of weed you want. Yeah, no joke, the pharmacists in LA give you a choice between OG Kush and Granddaddy Purple. In the future, the machines may also be outfitted to sell other popular drugs such as Viagra, Vicodin and Propecia. Combine all four for a really interesting night that'll also slowly grow your hair back!
And here I was thinking New York City was a liberal town. When do we get weed vending machines, Bloomberg? Huh?
Last edited by a moderator: Jan 24, 2008
dont blame your problems or stupidity on the weed... thats why its illegal

this is an article I found not something I wrote.. the way its typed.. i didnt want to give the wrong impression

This is a sign that times are a changing!

Submit your best photos to photos@420magazine.com for publication in 420 Magazine
K

I think i remember actually making a comment about "what it if"...on this topic with a friend at some point just joking of course...i really cant believe itsnot just a joke in passing any more...amazing.
:30:

Check out my journal, girl scout cookies grown in a cabinet - complete​
B

It's now on the front page of cnn.com-here's a video-

Why is all marijuana news coverage alarmist and sensationalistic, or do I even have to ask? (in response to the CNN video)
B

When people hear 24hr viagra and Cannabis, they will love the idea

420 Staff
Our Sponsored Co-op, West Hollywood Center for Compassionate Healing at 8921 Sunset Blvd. in West Hollywood has had these for 2 years.
420 Magazine®
Creating Cannabis Awareness Since 1993

That is cool shit wish i had one at work! I would be emptying it out daily lol hell as long as i am wishing i wish one was in my room lol.. Seriously this is great for people who need it and can obtain a prescription Times are a changing indeed
https://www.420magazine.com/forums/journals-progress/132033-mystery-cfl-grow.html

so why aren't more people just growing their own if they have the legal right to? is it because of the federal issue?
Check out my Grow Jounals​
Grape OG - Feminized - The Cali Connection -in progress​

Check out my journal, girl scout cookies grown in a cabinet - complete​
B

A lot of people don't have the time, the energy, or the proper living arrangements to grow for themselves. Some are just plain too sick.
420 Magazine®
Creating Cannabis Awareness Since 1993

Seen the vending machines on HNN news the other day,this is a good sign. I belive along as some bone head don't try and steal the machine or cheat the system, it would be fantastic.This is a shot in the groin to anyone who still opposes legalization for medical purposes.:31:

I wonder how long it will take the Feds to ruin this great legal idea... It's just a matter of time before coffee shops start poping up all over Cali! :cool027: